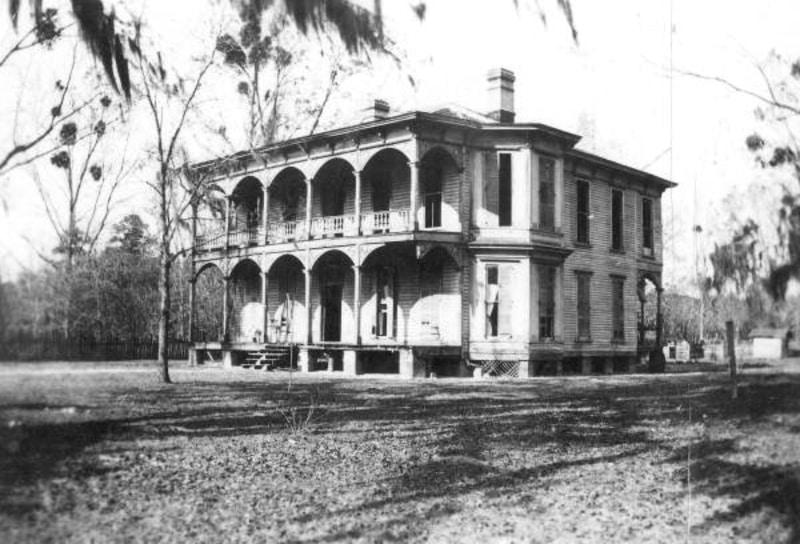 The Ghost Town of Ellaville

The town of Ellaville was a once-thriving mill town founded in the 1860s by lumber magnate and Florida State Governor George F. Drew. George Franklin Drew was born on August 6, 1827, in Alton, New Hampshire. He was forced to quit school at the age of 12 and work on the family farm because of his family’s financial problems. In 1841, he left the family farm and moved to Lowell, Massachusetts where he became an apprentice with the Locks & Canal Co. which was also known as the Lowell Machine Shop. There he learned how to build steam stationary steam engines as well as steam locomotives.

In 1846, he was old enough and experienced enough to be sent on assignment to Cohoes, New York to oversee the construction of a new mill. After a year, he returned to Lowell but again was sent on assignment, this time to build a stationary steam engine in Columbus, Georgia. He remained in Columbus, opening a machine shop of his own. It wasn’t long before he opened a sawmill and began producing lumber. 1854, he married Amelia Dickens and they had six children together.

During the Civil War in 1861, he supplied lumber to the Confederate government from his sawmill in Columbus. It should be noted that the information surrounding George F. Drew during this period is a bit muddled. That same year, he began making salt near St. Andrews Bay in Florida but his operations were soon abandoned when a Union raiding party destroyed his equipment in 1862.

After discontinuing his salt-making business, Drew sold his mill in Columbus and moved to Adams Station in Lee County, Georgia. Located just south of Smithville, he opened another sawmill and also owned and operated the train depot there along the Southwestern Railroad line. Although he continued to supply the Confederates with lumber from his new sawmill and owned slaves, he allegedly was against the secession of the Southern states going as far as advocating for the arming of Negroes in support of the Union. In 1863, Drew supposedly helped a man by the name of H.R. Linthicum escape the Confederate military draft by taking him down to St. Joseph Bay. They managed to signal the USS James L. Davis, a Union blockade ship, which took Linthicum on board.

In late 1863, Drew was arrested, charged with disloyalty to the Confederacy, and tried before the Confederate Commissioner at Macon. He was imprisoned in Savannah and released in 1864 having been found innocent of the crimes he was charged with. Resentful of the Confederacy, he planned to leave the South while retaining most of his property.

An acquaintance, J. B. Ross, owned 200 bales of cotton in a Savannah warehouse that was in danger of being captured by General Sherman’s forces. Drew sold his property in Adams Station for cotton in southwest Georgia which he in turn traded to Ross for the cotton in Savannah. Drew then took his family down to Florida while he himself boarded a Union ship in Savannah. Meanwhile, his cotton was captured by Union forces and resold in New York.

Following the Civil War, he opened yet another sawmill with some gold he had saved up in the small town of Columbus, Florida. For unknown reasons though, he moved his mill across the Suwannee River. He opened a steam-powered sawmill and lumber yard along the western banks of the Withlacoochee River, employing the workers from his previous sawmill. A small settlement grew around the sawmill which he named Ellaville, named in honor of his elderly long-time servant, Ella. Drew would also serve as postmaster from 1867 to 1883.

Between 1868 and 1871, Drew filed a claim with the United States Court of Claims for the cotton which was seized during the Civil War. The court found that Drew was “always loyal to the United States” and was the legitimate owner of 200 bales of cotton which was captured by United States forces. He was awarded $35,000. He entered into a partnership with Louis Bucki, a Prussian immigrant from New York, and established Drew & Bucki Lumber Company. With the court settlement and the financial backing of his new partner, the sawmill operations were expanded.

The sawmill soon became the largest in the state of Florida with over 1,200 acres near Ellaville, an additional 90,000 acres of timberlands in adjacent areas, and employing 500 people at its peak. Lumberyards and branch offices were established in New York City and Jacksonville. The company would eventually expand into turpentine production and railroad car building as well as establish its own private railroad company. Ellaville was soon booming with approximately 1,000 residents and a rail line that ran through the town with direct service to the mill. By the 1870s, in addition to the sawmill and train station, the town had two schools, two churches, a steamboat dock, a commissary, and a Masonic lodge.

Drew had amassed such a fortune from his various business ventures that his neighbors fondly referred to him as “Millionaire Drew”. In 1868, Drew also had a two-story mansion built just northwest of Ellaville surrounded by formal gardens. It was described as having ten rooms with oak parquet floors, a staircase made of imported mahogany, fireplaces adorned with marble mantels, and intricate plaster designs decorated the ceilings. The mansion was one of the first homes in the area to have running water, indoor plumbing, electricity, and a telephone.

In the early-1870s, George F. Drew was appointed a Madison County commissioner and chair. He also ran unsuccessfully for the Florida State Senate in 1872, but won the 1876 Democratic gubernatorial nomination and was elected Governor of Florida after a highly contentious recount. He won despite the fact that many Floridians knew he was from New Hampshire, was a Unionist in Georgia during the Civil War, and had supported Ulysses S. Grant for President in 1868. It was also no secret that he was awarded a cash settlement The public viewed him as the “redeeming” candidate who saved Florida from the “Radical” Republicans, carpetbaggers who had looted Florida for all it was worth. During his tenure, the state’s educational programs and penal system were hamstrung as he set on cutting expenses and reducing taxes. To make up for it, he established a convict lease system in the state. His administration is also credited with creating the State Bureau of Immigration to help promote settlement as well as the first implementations of county and city boards of health.

After his term as governor, he returned to Ellaville for some time before he sold his company shares to Bucki in 1883. He moved to Jacksonville where he opened a wholesale hardware business and served as the first president of Jacksonville’s board of trade. He eventually resumed his lumber and mill business establishing the Drew Lumber Company in 1886 in which he owned and operated several mills throughout Duval, Nassau, Suwannee, and Madison County. His wife Amelia died on September 26, 1900. Only a few hours after making funeral arrangements for his wife, George F. Drew died as well, leading one local newspaper to report that Drew died of a “broken heart.” Both are buried at Evergreen Cemetery in Jacksonville.

After Drew’s departure from Ellaville in 1883, Louis Bucki established L. Bucki & Son. In 1886, just a few months before he died, Louis formed Charles L. Bucki & Co. with his son, Charles L. Bucki, John W. Riordan, and Charles S. Hirsch. The company remained successful for several years and was the first to build and utilize a steamship for transporting lumber between Jacksonville and New York.

The End for the Small Town

In 1893, the Drew Mansion was occupied by Robert Lee Millinor, a businessman and politician who later served in the Florida House of Representatives between 1907 and 1929. He served as Ellaville’s postmaster between 1893 and 1912 and was a partner in the firm Beasley & Millinor, a dry goods and naval store company that operated a general store in town. In 1895, the Florida Railroad Gazetteer and State Business Directory reported that Ellaville had a population of 300.

In 1898, the mill in Ellaville was destroyed in a fire and although it was quickly rebuilt, the yellow pine it harvested was exhausted and by 1900, the mill was shut down. it was a slow death for the town from then on. In the following years, the town suffered from yearly flooding and the onset of war and depression loomed before it. In 1911, the Drew Mansion was abandoned by the Millinor family when six feet of water flooded the home. According to one report, a sharecropping family occupied the first floor for a number of years thereafter but kept the upstairs and basement boarded up to keep the haints out. Frederick Stroud who ran a general store in Ellaville took over the responsibility of postmaster and operated the post office from his store.

After the store burned down in 1921, Henry Charles Noegel petitioned for the office and was made postmaster. Noegel had only recently moved to Ellaville and established the Camp Suwannee campgrounds which featured a Gulf filling station, a restaurant, numerous campsites, and a general store where he also operated the post office. A new store, the Suwannee River Store, was erected in 1928. On January 6, 1929, less than a year later, Henry Noegel was shot to death by Joe Jenkins in front of his newly built store. Following his death, his wife Pearl Ellen Dempster Noegel sold the store but continued serving as postmaster, utilizing one of Camp Suwannee’s cottages as a post office.

In the midst of the Great Depression and World War II, the post office, as well as the general store, closed down in 1942. By this time, the Camp Suwannee campgrounds were no longer functioning. The Drew Mansion burned down in the 1970s after succumbing to decades of vandalism and neglect. The state had spent $10,000 prior to its destruction attempting to save it but the house was nothing but a shell having been stripped of all fireplaces, windows, and hardware.

The only relevance Ellaville held was its location as US Hwy 90 ran straight through the center of town. That was until 1986 when the Hillman Bridge, built in 1925 by the Federal Aid Project, was abandoned and replaced with a new bridge across the river, bypassing Ellaville. Very little remains of the town. The Hillman Bridge and Suwannee River Store still stand, though showing their age having suffered years of neglect. Some remnants of the sawmill can be found throughout the woods as well as the stone foundation of the mansion.