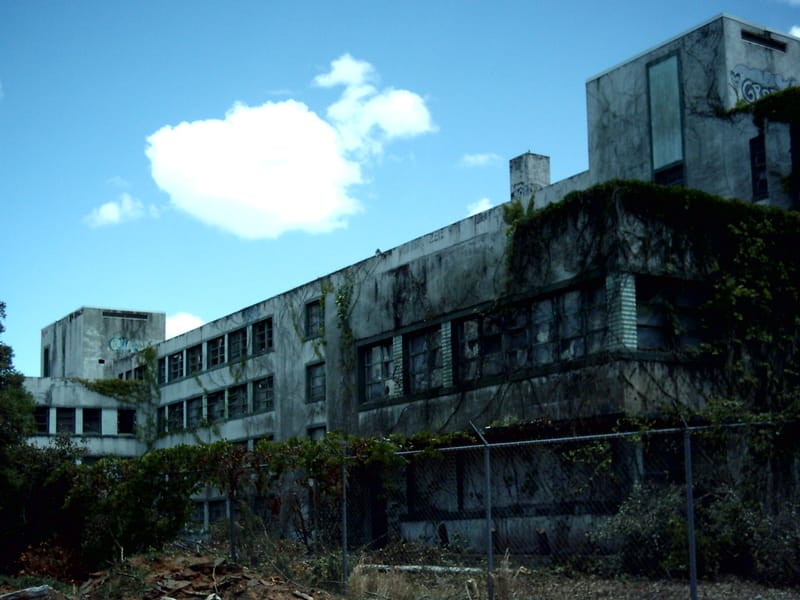 Around 1952, a new series of state-of-the-art tuberculosis hospitals opened and were named the W.T. Edwards Tuberculosis Hospital, named in honor of the first Chairman of the newly-created State Tuberculosis Board in Florida. Between 1952 and 1969, a total of 12 hospitals were built all over the state of Florida, including Tallahassee, Lantana, Miami, Marianna, Tampa, and several other cities in South Florida.

All the hospital buildings were constructed the same way; the main buildings were all very long and thin, consisting of 5 floors with a few smaller wings branching off from the main building. At the time, it was thought that fresh air was the best treatment for TB, so the buildings were riddled with multi-pane windows which could be opened by cranks. The backside of each building was a wall of windows, while the front windows were more evenly spaced apart, especially in sections that did not house patients.

When antibiotics and vaccines that were effective against tuberculosis were developed, there was no longer a need for tuberculosis hospitals and the W. T. Edwards Hospitals were all closed by the 1960s. The facilities fell under the jurisdiction of the Florida Department of Health and were reopened as Sunland Training Centers.

In 1961, the Division of Sunland Training Centers was established on the Board of Commissioners for Institutions and replaced the Division of Farm Colonies in Florida. Many former W.T. Edwards Hospitals were remodeled and reopened as Sunland Mental Hospitals, although the main hospital in Orlando was the only one which was not housed in a former W.T. Edwards hospital.

The Sunland Center in Tallahassee opened in the former W. T. Edwards Hospital and received its first 18 patients from Sunland Center in Orlando in 1967. Within just a year, the hospital started to suffer from a shortage of funds and overcrowding conditions. These forces caused a variety of problems to form within the hospital from poor and inadequately prepared food, overcrowding of the cottages, inactivity of the children, unsanitary conditions, the inadequacy of dental services, to unacceptable hygienic practices.

These conditions were not uncommon in the Sunland Centers throughout the state. Stories such as children sleeping with rats, patients being fed gruel through feeding tubes, and allegations of various forms of abuse were more than just fiction. After a series of investigations, the State Division of Retardation and local staff made promises for reform, but reform never happened. After careful review, the Association of Retarded Citizens(ARC) filed a federal class-action lawsuit in 1978, on behalf of the patients for gross neglect and abuse. Even though there are a number of theories as to why the hospital shut down, it is thought that this lawsuit was the catalyst for its closure and many of the other Sunland Training Centers.

Sunland Center in Tallahassee closed in 1983 and the property sat vacant for decades. The property was finally sold in 2005 for use in a housing and commercial district project, which later became the Victoria Grand Luxury Apartments. The demolition of the hospital building and all the surrounding buildings and wooded areas began in early-2006 and was completed by November of the same year. Today, there are no signs of the Sunland Center in Tallahassee and has since been replaced with the aforementioned Victoria Grand Luxury Apartments. Relics from the old hospital are said to have been saved and are now used in the Sunland Asylum wing of the Terror of Tallahassee haunted house.