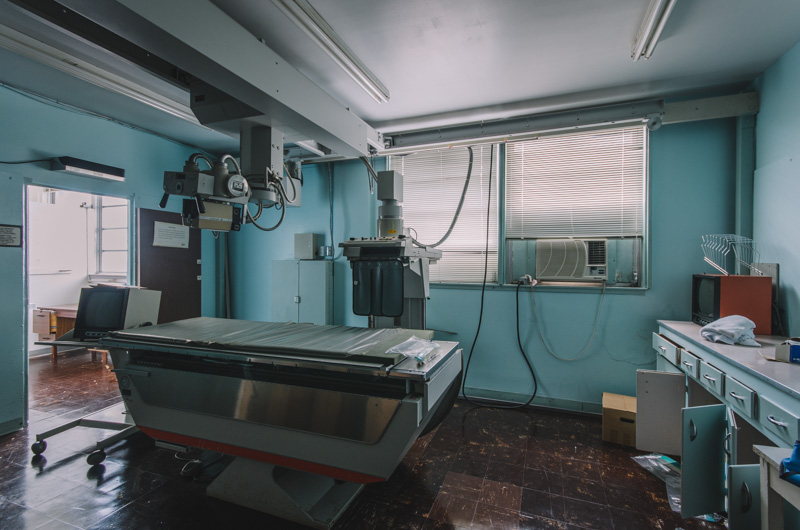 A. G. Holley State Hospital was opened on July 16, 1950, as the Southeast Florida State Sanatorium was also known as the Southeast Tuberculosis Hospital. It was the second of four tuberculosis hospitals built in Florida between 1938 and 1952 and was the last of the American sanatoriums dedicated to treating tuberculosis. It is sometimes referred to as Sunland in Lantana as it was built as part of the W.T. Edwards Tuberculosis Hospitals, later known as the Sunland Centers with services for the mentally and physically disabled, specializing mostly in children, though A. G. Holley was never used as a psychiatric hospital.

It was originally built to house 500 patients who were separated by race; white patients were lived in the east wing while African-American patients lived in the west wing. The grounds also including housing for doctors and nurses as well as its own power, water, and sewage treatment plants. All the W.T. Edwards Hospitals were constructed in the same basic way and this one was no different. The main buildings were all very long and thin, consisting of 5 floors with a few smaller wings branching off from the main building. At the time, it was thought that fresh air and sunlight was the best treatment for TB, so the building was constructed facing southeast to take advantage of the westward winds and has many windows to allow maximum sunlight and fresh air circulation.

In May 1969, the state renamed the Southeast Florida State Tuberculosis Hospital to A. G. Holley State Hospital, after Adrian Glenn Holley. Holley was appointed to the state’s tuberculosis board in 1953 and became it’s chairman in 1958 when its first president, W.T. Edwards, resigned. Holley remained chairman until 1968 when the tuberculosis board was dissolved as the disease was no longer considered a public health threat and all but two of the state’s tuberculosis hospitals had closed, the other being the W.T. Edwards Hospital in Tampa.

With the discovery of drugs to treat tuberculosis patients outside of the hospital setting, the daily census at the hospital by 1971 dropped to less than half of the original 500. By 1976 the beds and staff at A. G. Holley was reduced to serve a maximum of 150 patients. As space became available, other agencies were invited to move onto the complex to utilize the unique environment. Between 1975 and 1988, the west-wing of A. G. Holley served as a minimum-security prison for young, non-violent male offenders until five inmates escaped, one of them killing a Palm Beach police officer. The facility changed to only hold low-risk female inmates until 1992.

Tuberculosis in the United States and especially in Florida began to increase in the mid-1980s. This was due to the emergence of HIV, an increase in homelessness, drug addiction, immigration from areas of high tuberculosis, the spread in institutional settings, and the spread of drug-resistant tuberculosis. As the incidence of TB declined, so did the number of beds. Although the hospital was licensed for 100 beds, it was only funded for 50. As the rate of tuberculosis continued to decline, the Florida Legislature felt it was no longer cost-effective to run the hospital at a deficit of $10 million per year. The Florida legislature mandated in the 2012 session that the hospital closes its doors by January 1, 2013.

Its closure was accelerated by six months and was closed on July 2, 2012. This closure came just three months after the Centers for Disease Control and Prevention reported one of the largest uncontained outbreaks of tuberculosis in 20 years, not only in the state of Florida but also nationwide, resulting in 13 deaths and 99 illnesses. This report came after Duval County health officials contacted the CDC for help after witnessing a 16% increase in TB cases, mostly within the homeless population. The report also found that nearly 3,000 people may have come in contact with contagious patients in Jacksonville, where the outbreak was kept quiet by city officials because it was mostly among the homeless population. Under A.G. Holley’s policy, patients were kept at the hospital until they were free of tuberculosis, but due to the hospital’s early closing, its remaining 18 patients were sent to Jackson Memorial Hospital in Miami and UF Health Shands Hospital in Gainesville as many of the patients were uninsured.

The land was put up for sale in July 2013, but only received one bid and it was below the $10 million minimum bid. After the state lowered its asking price, the land was purchased in 2014 by Lantana Development LLC, a partnership between Southeast Legacy and Wexford Capital. The developer hasn’t revealed specifics about the future of the land but to expect retail stores, restaurants, entertainment venues, and housing. The demolition of the main building began on November 18, 2014, and today, nothing but the water tower remains