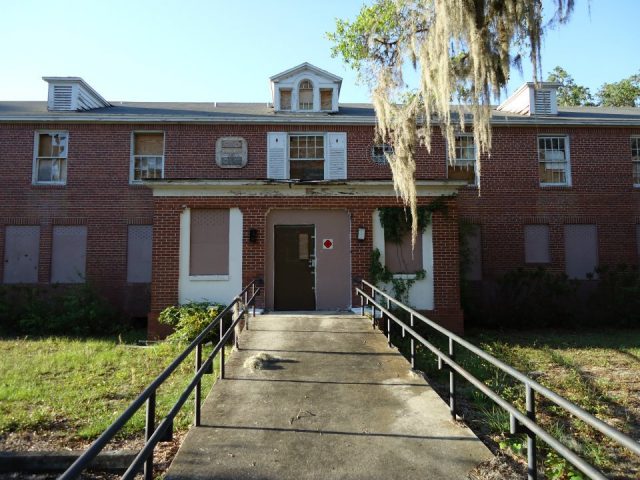 Around 1952, a new series of state-of-the-art tuberculosis hospitals opened and were named W.T. Edwards, in honor of an important figure in the state’s healthcare industry who donated large sums of money to have the hospital built. Between 1952 and 1969, a total of 12 hospitals were built all over the state of Florida, including Tallahassee, Miami, Marianna, Tampa, and Orlando.

All the hospital buildings were constructed the same way; the main buildings were all very long and thin, consisting of 5 floors with a few smaller wings branching off from the main building. At the time, it was thought that fresh air was the best treatment for TB, so the buildings were riddled with multi-pane windows which could be opened by cranks. The backside of each building was a wall of windows, while the front windows were more evenly spaced apart, especially in sections that did not house patients.

When a vaccine for TB was discovered, there was no longer a need for tuberculosis hospitals and the W. T. Edwards Hospitals were all closed by the 1960s. The facilities fell under the jurisdiction of the Florida Department of Health and were reopened as Sunland Training Centers by 1961. The main Sunland building, located in Orlando, was the only one not housed in a former W.T. Edwards.

The Orlando Sunland Division was a residential facility that cared for profoundly mentally and physically disabled adults and children. Within a period of 10 years though, the hospital faced some crippling developments, mostly due to understaffing and lack of funds. An investigation was conducted in the 1970s after reports of abuse and neglect, ranging from getting bitten by rodents and pests to physical beatings.

Speaking strictly of the Orlando Sunland Center, investigations found that over 400 patients had gastric feeding tubes and were being fed a cereal-like gruel three times a day. Investigations also showed the facility was maintaining unsafe surgical areas and used short-term doctor authorizations to administer treatments on a long-term basis. The State Division of Retardation and local staff made promises for reform, but reform never occurred. After careful review, the Association of Retarded Citizens(ARC) filed a federal class-action lawsuit in 1978, on behalf of the patients for gross neglect and abuse. This move forced the state of Florida to close all Sunland facilities in 1983.

It was reported afterward that a shortage of staff and equipment led to a “proliferation of deformities” in patients. The deformities included “upper respiratory infections, urinary tract infections, skin breakdown, and nutritional difficulties, all of which are much too common at Sunland Orlando,” Eileen Cox, the investigating therapist reported.

The building laid vacant for years afterward, attracting kids because of stories of the building being haunted. In June 1997, a 23-tear-old man and three friends were supposedly playing hide-and-go-seek inside when he was critically injured when he fell down one of the elevator shafts. Pine Hills residents lobbied hard after the accident to have buildings leveled by the state.

$2 million was set aside by the state and demolition was approved. In August 1998, a pre-demolition ceremony took place outside the old dilapidated hospital, as residents celebrated the building being torn down, ending a painful and controversial chapter in Orlando’s history. Previous staff and patients were invited as well, some were interviewed about their time there.

Mary Kortes, a floor aide who bathed, fed, and dressed patients from 1977 to 1979, remembers how tough it was to work there at first. “For two weeks after I went to work there, I couldn’t sleep because of what I saw there,” she said. “Everybody who worked there saw neglect, whether they admitted it or not. The state never gave us enough money.” Her husband, Dick Kortes, who was the plant’s operations engineer during the same period, remembers the roaches. “The place was jammed with roaches,” he said. “I mean, they would do pest control, but roaches would get inside the fire alarms and set them off, closing the fire doors.” He also remembers patients being bathed on hard terrazzo slabs and the “clunking of bodies” as they were turned.

Connie Mitchel, who has cerebral palsy and was a patient and Sunland for 20 years, remembered sleeping in a crib-like bed that she would occasionally share with rats. She said she awoke in her 100-bed ward one night to find a large rat sitting on her chest. It wasn’t the first time she had found one on her bed, she said. “All I wanted was for him to get off me,” she said.

After being torn down in 1999, all that remains of the Sunland facility is the old administration building. By the time you’re reading this, the old admin building may be gone as well leaving little trace of one of the most notorious hospitals in the state of Florida.

Where are the children that were here,My son was there. keepgoing6969@aol.com
I don’t know how to find out

You can try contacting the Florida Department of Health as well as the local universities, UF, UCF, and FSU.

You can also try contacting APD (Association for Persons with Disabilities) as they were responsible for finding new homes for all of the residents. Many of them went to Intermittent Care Facilities around the state.