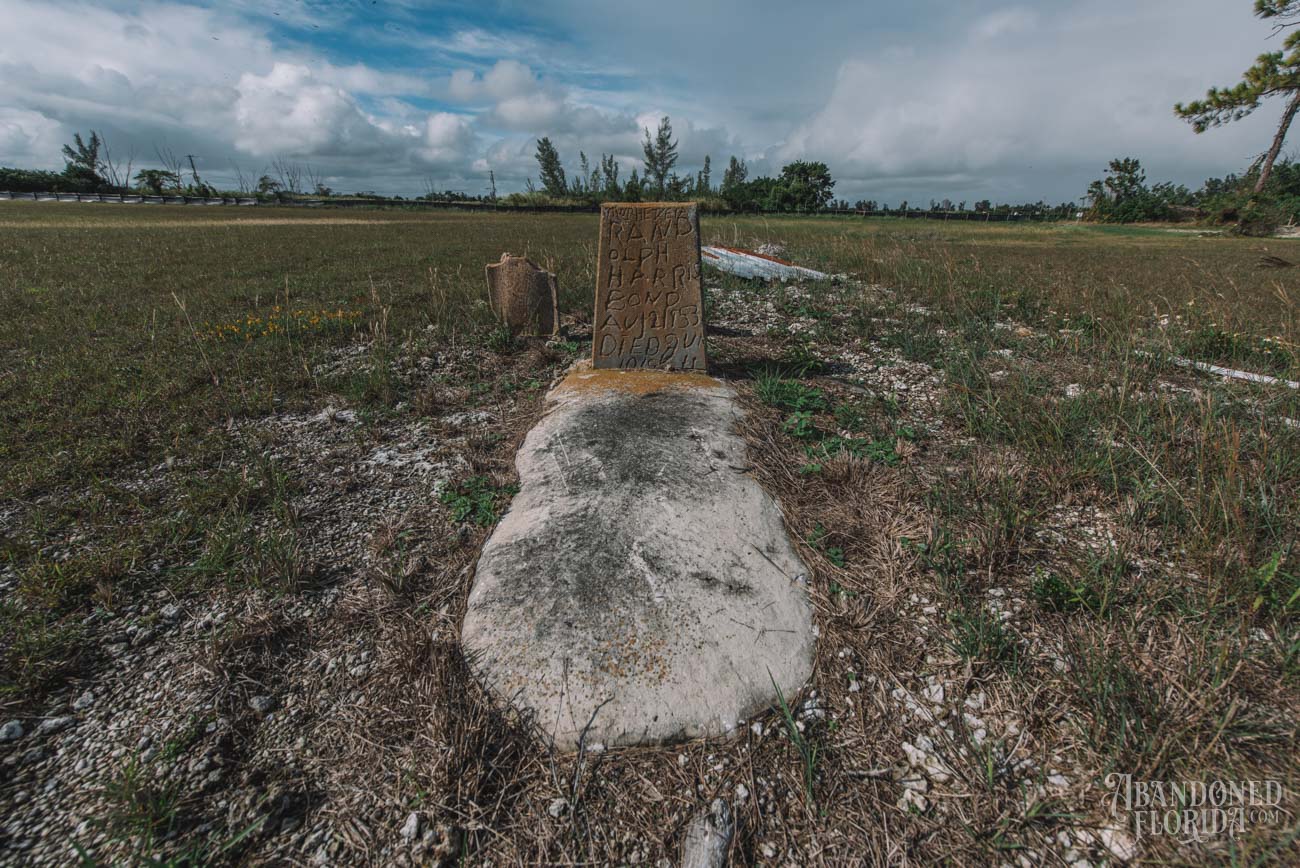 Silver Green Cemetery, called Carver or Princeton Colored Cemetery in some records, has a history that traces back to Gaston Drake, founder of the community of Princeton which he named after his alma mater, Princeton University.

Gaston D. Drake was born on August 23, 1871, in St. Louis, Missouri, the son of James Elias and Cornelia Bredell Polk Drake. He was educated at St. Luke’s School in Philadelphia, Pennsylvania, and Princeton University in New Jersey where he graduated in 1894 with a Bachelor of Science degree.

After graduation, Drake moved down to Yahala in Lake County, Florida to oversee a 150-acre orange grove belonging to his family. This large parcel of land would later be known as Drake Point, located just a few miles north of Howey-in-the-Hills. The crop was nearly wiped out by the freeze of 1894-1895 which destroyed so many other groves in the state. Following the freeze, he engaged in the fruit business in Nassau and other islands of the West Indies.

Drake went into the produce business with E. C. Lanier & Company in Lake County, and with them arranged to establish a vegetable fertilizer and crate business in Miami. After the business was sold out to Chase & Company, Drake partnered with Marcus Alexander Milam and Judson A. Hasseltine and organized the Drake Produce Company.

In 1904, he purchased the timber rights on more than 40 square miles of land owned by Henry Flager’s Model Land Company and by homesteaders. The Drake Lumber Company was organized in 1907 with Drake as president and Marcus Milam as the company’s secretary and treasurer. In 1909, he joined Milam and F. G. Railey in purchasing a small hardware store and starting the Railey-Milam Hardware Company. The three would later work together to establish Milam Dairy, for which Milam Dairy Road is named, in 1920.

The lumber mill, which could cut a million board feet of lumber a month, stood to the south of Silver Green Cemetery along the Florida East Coast Railway which ran parallel with the Old Dixie Highway. According to Drake’s wife, Mary Eleanor Robinson Drake, he constructed a 20-mile stretch of railroad to haul the timber to the mill. The steam engine that hauled the logging train was aptly named “Gaston Drake”. Lumber yards would later be established in Miami, Homestead, and Fort Lauderdale.

At Princeton, Drake built more than 100 houses for his workmen, a hotel, and a commissary. He cut the timbers and supplied the poles for the construction of the Collins Bridge in 1912, the first automobile connection between Miami and Miami Beach. He also supplied lumber for a large percentage of the early houses in the Miami area. In an interview in 1970, Mary Drake told The Miami Herald that “The wood was so hard that carpenters complained they had trouble driving a nail through it. But it was heartwood and almost immune to termites.”

For the majority of their time in Miami, the Drakes lived in a house located at 447 Northeast 39th Street. The house was built by Charles Deering who built the house for the overseer of his Buena Vista estate. The Drakes were close friends of James Deering and were frequently invited to Villa Vizcaya. Paul Chalflin, interior decorator and designer who directed the building of the Vizcaya, lived in the garage apartment of the Drakes’ home during the construction period, between 1914 and 1917.

Once the local timber in South Dade County was cleared, Drake and Milam made plans to relocate the company mill. In June 1923, Milam closed a deal on the purchase of the timber rights for 60,704 acres of land located north of West Palm Beach from the Southern States Land and Timber Company. The Princeton mill was dismantled and relocated to Kelsey City, now known as Lake Park.

Despite the mill having the capacity to cut 100,000 feet of lumber a day, the surrounding timber was becoming scarce very quickly. By 1925, the mill was averaging about 60,000 feet a day. The company though continued to expand and adapt such as offering doors and window frames, sash, trimming, and various nails and hardware needed for the different kinds of lumber.

The Drake Lumber Company continued to operate its lumber yard in Miami until it was dissolved in 1939. Drake had many business ventures, many of which were not successful. He tried his hand at drilling for oil and drilled at Miami beach, but found nothing but brackish water. He later drilled two wells at Forty-Mile Bend on the Tamiami Trail and only found trace amounts of oil. Drake died on December 17, 1955.

Silver Green Cemetery was established in 1905 when Gaston Drake provided land to be used as a cemetery for his black workers. Once the company moved to Palm Beach County, the cemetery was acquired by the East Masonic Lodge #1 in the late-1920s for taxes. It became the permanent burial site for blacks from places such as Homestead, Princeton, Perrine, and Goulds in the days of segregation.

When a death occurred, family members notified their Funeral Director, the Minister, the Masons, and the gravedigger. The family paid twenty-five dollars for the grave space and five dollars to the gravedigger for the opening and closing of the gravesite. In the early days, it took two to three days for several men to break through the coral rock, which required picks, grubbing hoes, and shovels to break it up. In January 1919, Johnnie “Catman” Everett’s sister-in-law died of tuberculosis, and prepared her grave by himself in just six hours, demonstrating that dynamite could get the job done more quickly. From then on, he served as the cemetery’s official gravedigger until 1955.

Insurance companies did not seek black policyholders until the thirties, therefore families usually didn’t have the money to cover the cost of $150 for the cheapest cloth-covered casket. Door-to-door collections were a regular occurrence and were usually made by a friend of the deceased.

The last known burial at Silver Green Cemetery occurred on July 17, 1955. That same year, the property was purchased by Phillip Coleman, owner of Palms Woodlawn Cemetery in Homestead, who claimed he bought the cemetery off of Arthur Mays, a pioneer in the local African-American communities. Silver Green Cemetery soon fell into disrepair. Headstones had crumbled or were stolen by thieves. The lot became overgrown. Soon enough, relatives of the dead could no longer find their loved ones.

In 1989, a local man by the name of Henry Givens filed a complaint and invited Gerald A. Lewis, the state comptroller, to tour four heavily neglected cemeteries in Dade County. Silver Green Cemetery, then known as Carver Cemetery, was the first stop on the tour which at the time was situated within an overgrown pine forest. “This is worse than anything I’ve ever seen,” Lewis said in regards to the state of the property. “Obviously, this has just been neglected for many years.” The other cemeteries he toured were Pinelawn Cemetery in Richmond Heights, Charlotte Jane Memorial Park in Coconut Grove, and Lincoln Memorial Park in Brownsville.

The owners of the cemeteries were ordered to clean up and make any necessary repairs. In a final order issued in May 1990, Coleman promised to maintain Silver Green Cemetery “in a reasonable condition,” keep all existing monuments upright and continue “good faith efforts” to find out who is buried in each grave. The state never checked to see whether Coleman kept his word.

An investigator found that Phillip Coleman had initially maintained the property but stopped when no sales were made, according to a 2004 article by The Miami Herald. That same year, Miami-Dade commissioners passed a resolution urging the state to support the preservation, restoration, and recognition of historically black cemeteries such as Silver Green, stating that “many of Miami-Dade’s early black pioneers are buried in Silver Green Cemetery.”

Within a year of the vote, the cemetery was sold to a real-estate agent by the name of David Vega. Vega has kept the property maintained by installing a sprinkler system to keep the grass green and having it mowed on a regular basis.

Because many of the grave markers are gone, historians and locals have expressed their desire to know how many people are buried there and who is buried there. When Johnnie “Catman” Everett was the gravedigger in the early days, he couldn’t read or write, so any documentation was kept by his young daughter who “didn’t know anything about keeping records.” Cemeteries before 1959 were also unregulated and so they weren’t required to keep records.

It was also difficult to keep track of burials as most graves were unmarked as most families couldn’t afford a gravestone. The few gravestones that existed have been moved, plowed over, or stolen. The gravestone of John Thomas Byrd was originally located west of his cousin David’s grave. Now, the grave marker sits across the field and there’s no way to find where his cousin was buried at.

Ground-penetrating radar has been recommended numerous times to not only know how many graves there are but also to define the boundaries of the cemetery. David Vega, the cemetery’s owner, says that isn’t needed because he already knows where all the graves are located because radar was already used in 2005 by the former owner, Phillip Coleman. He hasn’t been able to produce any documentation of that work.

Despite what county records indicate, Vega also doesn’t think the cemetery is historic nor was it segregated. Vega has stated his plans to put markers on all the graves, and for the first time in 60 years, the cemetery would reopen to the public for additional burials. Since then, there has been no work done.

Today, only a handful of grave markers remain, be it proper gravestones or rocks with names scratched into them. The gravestone of World War I veteran John Thomas Byrd rises from a cracked cement stand, stained green and missing a large chunk. The shattered headstone of Julius Ross, another World War I veteran, lays buried in the dirt. A small grouping of headstones poke out of the coral rock, the names hardly recognizable except for the hand-carved headstone of Randolph Harris. A sign sits upfront with the word “Cemetery”. The words “Silver Green” have faded to time, an analogy to how this cemetery has simply been forgotten.