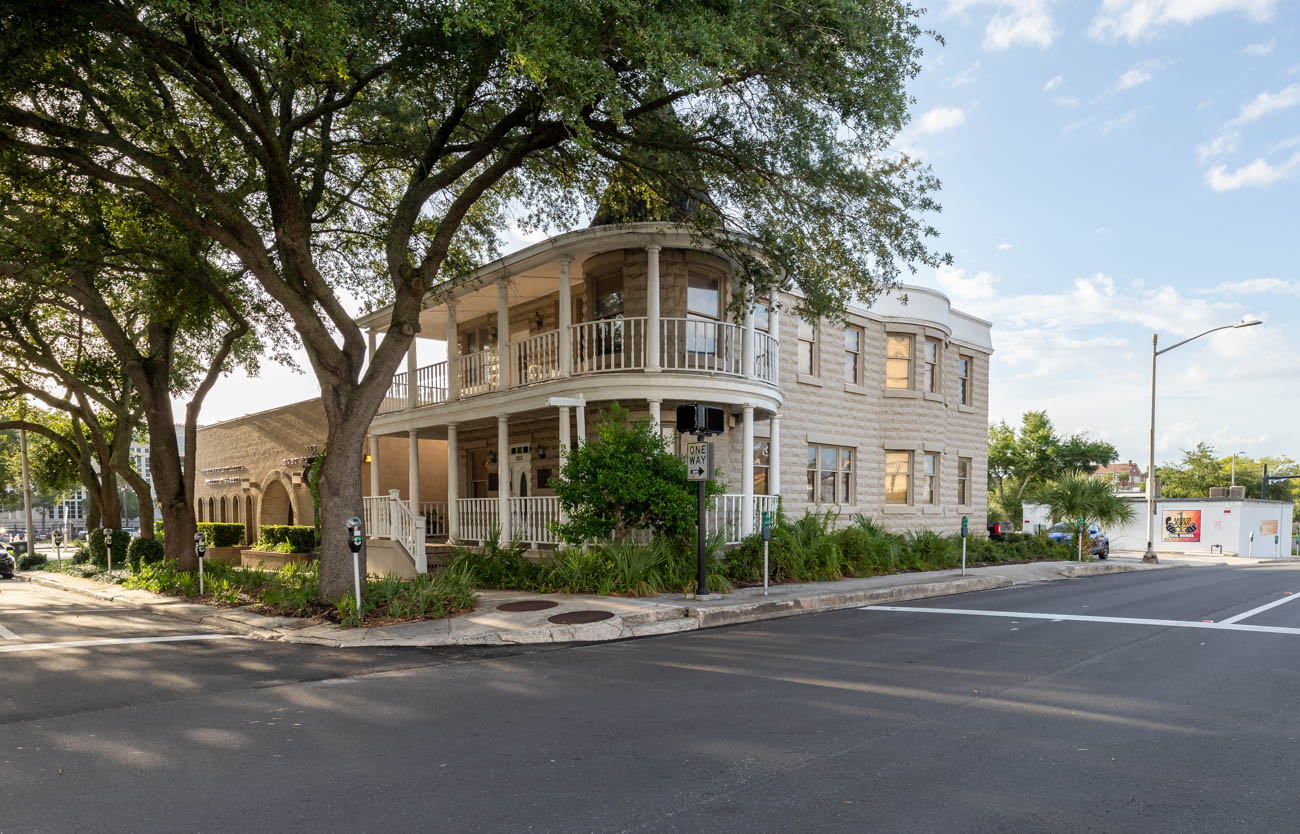 The Plaza Hotel, also known as the Plaza Building, is a historic hotel and residence located in downtown Jacksonville. The Plaza Hotel was constructed in 1903 on a lot that previously was the site of the home of Augustus Bexley. Bexley was a grocer and realtor from Lake City who served as Chief Surgeon for the Confederacy during the Civil War. Sometime prior to 1887, Bexley acquired the lot and built a brick residence. Between 1891 and 1893, it was expanded with the addition of a three-story tower on the southwest corner of the house as well as a large veranda.

Like most others in downtown Jacksonville, Bexley’s home was destroyed in the Great Fire of 1901. Bexley’s son, Robert Risby Bexley, was issued a building permit in May 1903 to reconstruct the residence as a hotel. William F. Ivers, a local contractor and former chief of police of Jacksonville, was hired to construct the new building. It was designed to resemble the previous home lost in the fire, except the tower was placed on the southeast corner of the building. Construction was completed by December 1904.

The Plaza Hotel was constructed of fireproof manufactured concrete block, a relatively new building material that was first introduced in Jacksonville during the late 1890s. The use of concrete block as a construction material occurred in Florida as early as the 1870s in Tampa. The use of this material was originally considered a viable substitute for quality stone, which was not native to Florida and, therefore, was expensive. There are no extant concrete block buildings in Jacksonville that pre-date the Plaza Hotel. Only one structure has been documented to have been built of concrete block prior to the Plaza, that being the old Duval County Armory which was destroyed in the Great Fire of 1901 and later replaced in 1916.

It opened in early 1905 to take advantage of the upcoming tourist season. The hotel was advertised on leaflets and flyers as “a handsome stone building two blocks from the Clyde New England Pier and one block from the fashionable Bay Street district. It is situated in the aristocratic section and is designed for refined guests.” The Plaza’s location near the steamship pier and the Duval County Courthouse made it an ideal location for overnight visitors.

As a seaport and railroad town, Jacksonville had a thriving tourist trade during the late nineteenth century. The city had hundreds of hotels and rooming houses for short and long-term guests. During the 1901 fire, however, most of those tourist accommodations were destroyed. By the early 1900s, Jacksonville had lost much of its tourist trade to the more popular destinations of Southeast Florida so few of these lost tourist accommodations weren’t rebuilt. The Plaza is the oldest surviving historic hotel in downtown Jacksonville.

The Plaza was operated as a hotel until 1913 when Robert Bexley and his family began using the building as a home. Throughout its later history, the house was used at times as a boarding house but remained the residence of Bexley and his descendants, Sarah Ellis and Mary Connery. The building was purchased in 1985 by local attorney Glenn K. Allen, who renovated it for use as a law office. On December 30, 1992, it was added to the U.S. National Register of Historic Places. The building is currently occupied by Oxford Ink Tattoo.

Author’s Note: Many thanks to Dee Adams for contributing his photos of the Plaza Hotel. You can find more of his work on Instagram (@dvision4).