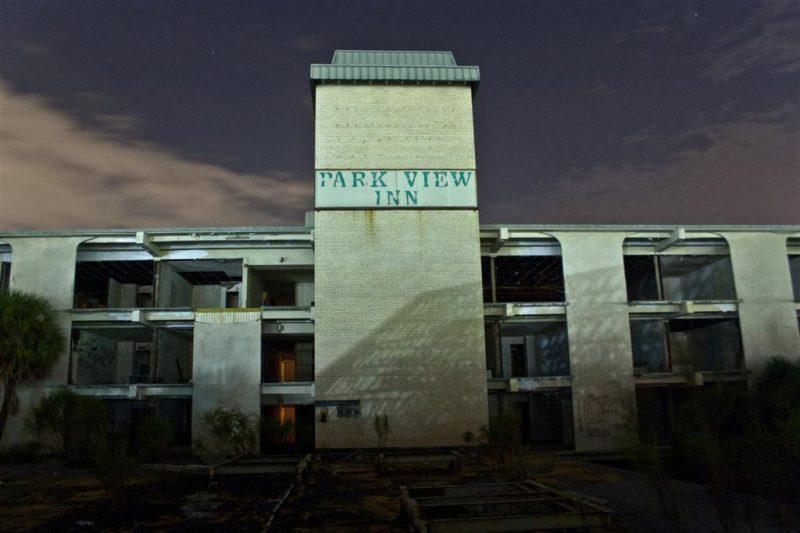 The tomb which featured a large brick pyramid was desecrated in 1896 when graverobbers broke inside to steal valuables. The monument was dismantled in 1902 following the Great Fire of 1901, and the bodies of Isaiah Hart and his family were moved to Evergreen Cemetery.

An Uneventful Stay by The Monkees

On July 8, 1967, The Monkees came to Jacksonville to play a show on their North American Tour at the now-demolished Jacksonville Coliseum. Jimi Hendrix and his band were the opening act. The Monkees stayed on the fifth floor of the Heart of Jacksonville Motor Hotel surrounded by an entourage of security and police officers. Ric Klein, the stage manager for the tour and Micky Dolenz’s best friend, published a tour diary in Flip Magazine that same year where he described a rather mundane experience where the group swam in the pool and hung around the hotel before the show. The owners of the hotel filed for bankruptcy three months later citing a low occupancy rate.

On the night of February 4, 1969, Florida National Bank president Henry E. Lewis and his wife returned from a bridge game to find two tall and husky white men sporting trenchcoats inside their home. The two men brandished guns and held them prisoners until the bank’s vault was open. In the morning, one of the men took Lewis in a Volkswagon owned by the bank while the other took Mrs. Lewis into her own Buick Skylark. Lewis was driven to the bank and was told to go inside and return with $70,000, and “if you don’t get the money you will never see your wife again.”

Lewis did as he was told, and after delivering the ransom money, he was released in downtown Jacksonville and returned to the bank in a taxi. Meanwhile, a bank employee had notified the FBI. Mrs. Lewis was released in south Jacksonville about two miles from their home. The bank’s Volkswagon was recovered near the Heart of Jacksonville where authorities believed the two men stayed and planned the kidnapping. The FBI investigated the case by dusting for fingerprints, interviewing witnesses, and following any leads, but the two men were never apprehended.

A couple of months after the kidnapping, police conducted a two-week undercover investigation at the Heart of Jacksonville as well as two Jacksonville bars; the R and R Lounge, and the Standor Cocktail Lounge. Police raided the businesses which resulted in the arrests of 10 people, including four “go-go” girls. Charged included soliciting and offering to commit prostitution, procuring for prostitution, allowing loitering for the purposes of prostitution, soliciting drinks, and allowing soliciting for drinks.

In 1979, the Heart of Jacksonville housed the business office of Jax Police Softball T-Shirts, Inc. Members of the Jacksonville Fraternal Order of Police came up with a T-shirt campaign to raise money to send the Jacksonville Police Department’s 20-man softball team to the Super-Cops tournament in New Orleans which was described as an Olympic-style sports competition for policemen. On the T-shirts, it read, “1 Down—133 To Go!” accompanied by a picture of an electric chair. This was in reference to the execution of John Spenkelink, the first convicted criminal to be executed in Florida after capital punishment was reinstated in 1976.

Spenkelink was a loner and a drifter who was convicted in California for armed robbery and had been sentenced to five years to life. In 1973, he escaped from the Slack Canyon Conservation Camp, a small prison located in the California mountains, and found his way to Tallahassee. Sharing a room with a small-time criminal named Joseph Szymankiewicz, he killed him by shooting him in the back. Spenkelink claimed self-defense—that Szymankiewicz had stolen his money, forced him to play Russian roulette, and sexually assaulted him. Evidence and witness testimony from a co-defendant said otherwise.

In 1973 he was convicted of first-degree murder and sentenced to death. Governor Bob Graham signed his death warrant and on May 25, 1979, Spenkelink’s execution was carried out in “Old Sparky”, the Florida State Prison electric chair. That morning, Doug Tracht, a popular Jacksonville disc jockey, aired a recording of sizzling bacon on his radio program and dedicated it to Spenkelink. His death left 133 condemned prisoners on death row. The T-shirts celebrating his death started a trend with possibly the most famous “Burn, Bundy, Burn!” T-shirts celebrating the execution of convicted serial killer Ted Bundy.

Like most businesses in Jacksonville, the Heart of Jacksonville struggled throughout the crack epidemic of the 1980s. By the time the hotel was renamed the Park View Inn, it was a run-down husk that offered weekly rates to the displaced masses when the LaVilla neighborhood was demolished.

The hotel had been plagued with fires throughout this era of decline. In 1996, a fire in a vacant room was caused by an electrical shortage. In January 1997, a three-year-old girl woke her mother because her two-year-old sister had set the bed on fire. In 2000, three fires were set inside the hotel with the third occurring in November after a man deliberately set himself on fire. The man was rushed to the emergency room with second and third-degree burns over half his body. He survived.

Later inspections of the building found the hotel didn’t have a working fire alarm and had exit doors chained shut which would prevent people from escaping. Electrical wires protruded from walls and overhead lighting, fire extinguishers were either missing or broken, and many of the smoke detectors were not working properly. The building was condemned in December 2000 and residents were given a day’s notice to vacate the property.

That same year, a study made by the Florida Department of Environmental Protection found tar residuals underneath the hotel, barring any current or future plans for the redevelopment of the property. The property was formerly utilized as a manufactured gas plant from 1875 to 1913, known as Jacksonville Gas Works and Citizens Gas Company. In addition to the contamination issues associated with the former gasification plant, the site is registered as a leaking storage tank facility due to the presence of a former heating oil underground storage tank.

After its abandonment, the former hotel became a haven for transients and vandals. In April 2007, police arrested a 48-year-old man after he was found throwing pieces of aluminum off the balcony of the Park View Inn. After attempting to flee by scaling a wall, he was arrested and charged with burglary. The fires never stopped even after its closure, although it’s unsure if the fires were set deliberately. The property owner presented a plan to convert the old hotel into a housing facility for students, but the plan quickly fell through as the real estate market collapsed soon after.

In 2010, the city planned to demolish the building but stopped due to a proposal made by the property owners to convert the building’s first floor into storefronts while demolishing the top floors. Floors 2-5 would be demolished and a parking deck will be built on top of the first floor, which is currently the original parking garage built in the 60s. That proposal was ultimately shot down and the demolition of the hotel was completed in September 2011. All that remains is a portion of the parking garage where you can find homeless people finding shelter from the rain and local police parked inside on their breaks.

The property owner, Jacksonville Hospitality Holdings LP, had the property rezoned in 2017 with Southport Development, a Tampa-based multi-family housing developer founded in 1995 that builds and acquires market-rate rental properties. Southport’s market niche centers around developing and rehabilitating government-subsidized housing through the Low Income Housing Tax Credit (LIHTC) program. The company has acquired and rehabbed over 1,200 multi-family units in Jacksonville. Any plans for the site though are on hold until a federal environmental cleanup lawsuit filed in 2012 by the City of Jacksonville is resolved.