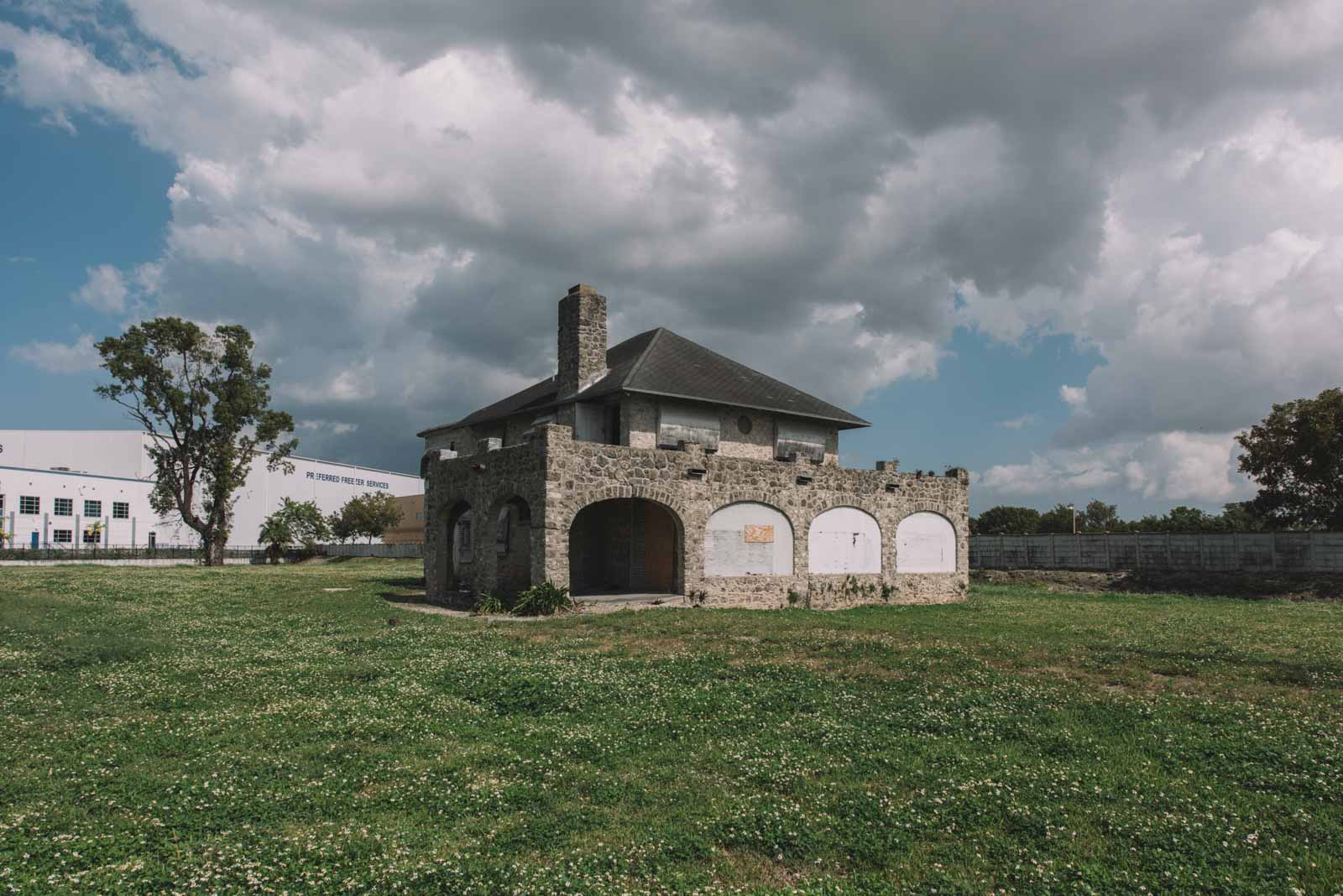 Ernest R. “Cap” Graham was born in 1886 in Croswell, Michigan. He worked as a mining engineer in South Dakota where he would meet his first wife, Florence Morris. They would have three children together: Philip Graham, former publisher of The Washington Post; William “Bill” Graham, president of the Graham Company and principal developer of Miami Lakes; and Mary Graham Crow. He served in the U.S. Army in World War I, attaining the rank of captain in the 309th engineers.

In 1921, he and his family moved down to the company town of Pennsuco, Florida to manage operations for the Pennsylvania Sugar Company. The Pennsylvania Sugar Company established Pennsuco in 1920 and built a sugar cane plantation and sugar mill, and a self-contained community housing employees and their families. It contained a store, a church, a doctor, a dance hall, and a post office. Workers employed at the plantation were housed in framed buildings constructed on stilts to protect against high water. Single men lived in bunkhouses and were fed in the company mess hall, while families were placed in individual units. White and black workers were also separated into different units during this time. White workers were paid from $100 to $200 a month including living quarters. Black workers were paid 20c an hour until the pay was increased to 40c in 1925. All workers normally worked a ten-hour day, six days a week, or a total of sixty hours a week. It was within this community that Ernest Graham built the family home in 1924.

The real estate boom of the 1920s in South Florida caused property values to rise so rapidly that large numbers of dairies in the county were forced to shut down by 1924. This resulted in a decrease in fresh milk supply which was alarming for those holding interests in the dairy industry. On May 16, 1925, the Dade County Dairy Association invited Ernest Graham to discuss the possibility of utilizing Everglades land for cow pastures. Ernest spoke about how the Pennsylvania Sugar Company was planning on draining 425 acres of Everglades land using pumps and if this was successful, the same method could be used for pastures. The heavy rains later that same year along with the “bust” of the real estate boom prevented the draining project from advancing. The flooding experienced that year was not out of the ordinary as Pennsylvania Sugar struggled with heavy rains destroying their crops during the summer and fall seasons. By 1925, the sugar operation had failed and in 1927, the Pennsylvania Sugar Company sold its sugar mill to the Southern Sugar Company which moved the mill up to Clewiston.

After a flood in the summer of 1925, the land was adapted for regular truck farming such as tomatoes, carrots, and potatoes. Many of these vegetables were sold in the Miami area, but much of it was shipped up to northern markets. From 1928 to 1931, the plantation operated as the Pennsuco Farming Company and Ernest remained as manager. A canning factory was put into operation in 1930 for canning surplus potatoes and beans. These cans were sold under the trade name of the Pennsuco Farming Company. Pennsylvania Sugar wasn’t especially interested in running a truck farm since sugar was its main business and the Great Depression made it impossible to operate the plantation profitably, so operations were shut down in 1931. Ernest Graham was able to negotiate with the sugar company and acquired 7,000 acres of land to start a business called Graham Dairy. Many of the old buildings were reused such as the housing units, commissary, and offices. The warehouse for the former sugar mill was used for storing animal feed and farm equipment. Pennsuco’s post office continued operating until 1933.

His wife died of cancer in 1934, and in 1936, he remarried to Hilda Simmons, a schoolteacher. They had one child together, future Florida Governor and United States Senator Bob Graham. In 1936, Ernest was elected to the Florida State Senate, where he served two terms from 1937 to 1944. As a state senator, he sought to increase taxes on horse racing in order to increase funding for the aged. This led to an investigation into horse racing in the state resulting in the publicizing of alleged corruption and mob connections within the Florida racing industry. In 1942, he lobbied for Dade County and Miami, seeking more government contracts and other benefits for the area. He promoted the use of a barge canal across Florida through Lake Okeechobee to avoid the risk of wartime shipping through the Florida Straits. In 1948, Ernest unsuccessfully sought election to the Dade County Commission. The town of Pennsuco, with a population of 133 at the time, was incorporated in 1949. Ernest Graham returned to farming and would live here until his death in 1964.

The dairy moved to Moore Haven in the early-1950s due to residential development, taking with it many residents of the town. By the 1970s, the family sold much of the town’s land to Rinker Materials Co., a concrete manufacturing company. The dwellings, including the coral rock home of the Grahams, remained on the Graham Company land. The population of Pennsuco dwindled to 74.

Homes were knocked down and Okeechobee Road was widened from two lanes into six-lane U.S. 27. By 1985, Pennsuco’s population was 15. The following year, having no police or fire services, no sewers, and no city water, the remaining residents voted to abolish the city charter and were annexed into Dade County. The family home was designated a historic landmark of Miami-Dade County in 1982. Despite that, the house has fallen into ruin with no plans for it in the future.