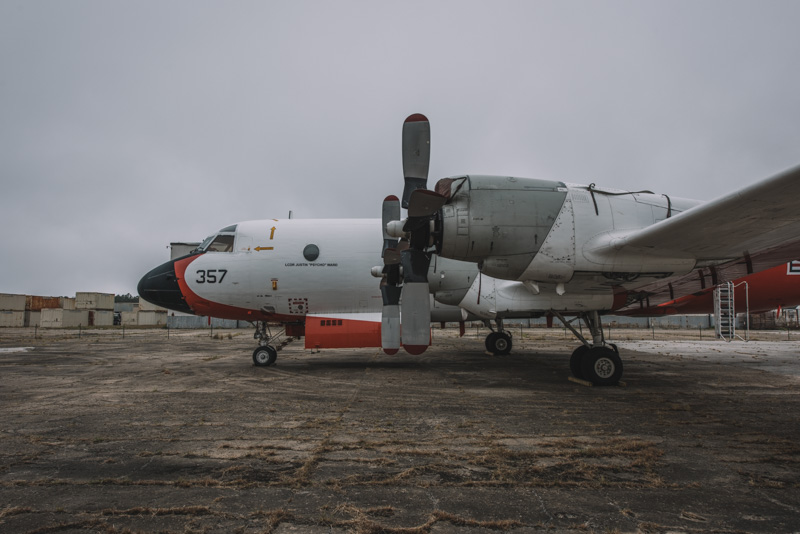 Introduced in the 1960s, the Lockheed P-3 Orion is a four-engine anti-submarine and maritime surveillance aircraft developed for the United States Navy to replace the aging P-2 Neptune. Two P-3 Orion aircraft were modified for the Central Intelligence Agency (CIA) in 1969 and operated by the VQ-1 “World Watchers”. Their primary missions of these new P-3B aircraft included reconnaissance missions against Soviet ships in international waters by monitoring Russian radar and radio signals.

Another modified P-3B Orion (#153442) was put into service for the Naval Research Laboratory (NRL) in September 1979. The NRL is the United States government’s research and development laboratory for the United States Navy and the United States Marine Corps. The aircraft was used to test radar and electronic warfare systems carried in three equipment pods below the weapons bay and an additional three pods on the standard wing hardpoints.

In 1999, the P-3B Orion #153442 was once again modified with a distinctive E-2C rotating antenna (rotodome), a Hawkeye 2000 Airborne Early Warning (AEW) system and an Airborne Engagement Capability (CEC) suite, and redesignated as NP-3D. On December 13, 2004, Scientific Development Squadron ONE (VXS-1) was established. The VXS-1 “Warlocks” are a military support squadron for the United States Navy to provide heavy-lift aircraft capable of supporting scientific research projects around the world for the NRL, Department of the Navy, Department of Defense, and other government agencies that contribute to the NRL. NP-3D Orion #153442 continued serving the NRL under the service of VXS-1.

In October 2013, the aircraft was reassigned to the Air Test and Evaluation Squadron 30 (VX-30) and redesignated as NP-3C, nicknamed “Bloodhound-357”. The VX-30 “Bloodhounds” is one of the most diverse squadrons in the Navy with flighter, reconnaissance, and transport aircraft used in various tests of current and future weapons systems. The squadron’s most used aircraft is the P-3 Orion. Used in conjunction with the testing on the Sea Test Range for surveillance and clearance as well as providing telemetry data during missile testing. These aircraft were also used during five NASA Space Shuttle missions to monitor re-entry.

In June 2017, Bloodhound-357 was moved to the 309th Aerospace Maintenance and Regeneration Group (AMARG). AMARG, commonly referred to as The Boneyard, is a United States Airforce aircraft and missile storage and maintenance facility located in Tucson, Arizona. Three months later, it was reassigned to the United States Border Patrol but it wasn’t much longer before the aircraft was scrapped and left on what remains of the former Naval Air Station Lee Field in Green Cove Springs. The plane has sat in the same location for years now, decaying alongside the giant hulk of a WWII hangar and the unfinished ATLAS hovercraft.