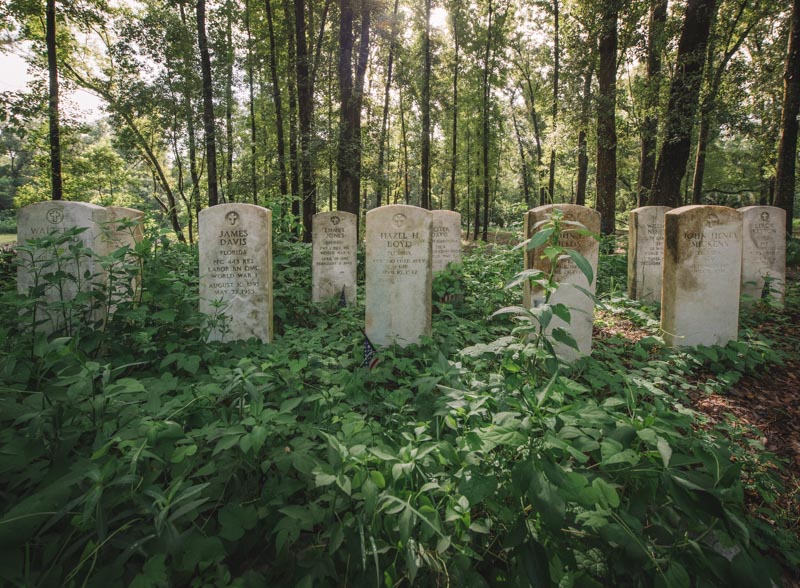 Memorial Cemetery is located at the corner of Moncrief Road and Edgewood. It was established in 1909 by Leo Benedict, a treasurer at Benedict and Pollack Co., who would relinquish ownership of the cemetery just two years later in 1911 to the Memorial Cemetery Association.

The Memorial Cemetery Association enlisted the Afro-American Life Insurance Company, the same company that established American Beach, to operate and maintain the cemetery. By this time, Abraham Lincoln Lewis was president of both the association and the insurance company.

In 1936, the Memorial Cemetery Association had expanded to include both Sunset and Pinehurst cemeteries. That same year, the association was disbanded but the Lewis family continued to own the properties privately.

The Moncrief area was well known for its role in Jacksonville’s entertainment industry throughout the first half of the 20th century. By the 1960s, many of the entertainment and recreational businesses had gone out of business. Around this time, residents began complaining that the cemeteries on Moncrief Road were in decline. The Moncrief area today is considered one of the most impoverished areas in Jacksonville with a high number of abandoned buildings, unemployment, crime rate, and homicide.

By the 1980s, the Lewis family was having issues maintaining the properties. In 1986, Abraham Lewis’ son, James Lewis, signed over ownership of the properties to Memorial Cemetery Incorporation, a local non-profit. It wasn’t long before they ran out of money required for the perpetual care of the cemeteries, and the City of Jacksonville took over the upkeep of the cemeteries.

Right at the entrance to the cemetery is the Craddock Mausoleum, designed with an Art Deco aesthetic in mind with streamlined details. The mausoleum was built sometime in the late-1930s to mid-1940s by James Craddock, known widely as “Charles Edd”. Craddock came to Jacksonville in 1921 and established the Little Blue Chip nightclub at the Richmond Hotel on Broad Street. He later moved on to the New Blue Chip, which at the time was considered one of the finest nightclubs in the South.

He garnered a reputation as a philanthropist when he opened a bread line for the needy at the onset of the Great Depression. He would later lose the New Blue Chip nightclub in 1931 but continued to operate the Blue Chip Hotel and a billiard room and cabaret.

In subsequent years, he would own several other businesses including the Charlie Edd Hotel, the Young Men’s Smoke Shop, Uncle Charlie Edd’s barbershop, and various loan offices and pawn shops. In 1940, he would open the Two Spot nightclub on Moncrief Road which would be known as “the finest dance palace in the country owned by a Negro”. The nightclub also played host to many great African-American musicians such as Cab Callaway, Louis Jordan, and Ella Fitzgerald.

Along with the other cemeteries in the area, the cemetery went into decline around the 1960s. Today, the cemetery is in a bad state with massive amounts of overgrowth, trash littered about the property, and headstones smashed or knocked over.

Located at the corner of Moncrief Road and Restlawn Drive, Pinehurst Cemetery was established by the Afro-American Life Insurance Company’s Memorial Cemetery Association in 1928. Unlike Sunset Cemetery, Pinehurst catered to working-class and low-income African-Americans.

In 1992, Pinehurst was designated a local landmark along with Sunset and Memorial Cemeteries by the City of Jacksonville. In September 2018, Pinehurst Cemetery served as the catalyst for a $10.8 million plan by Mayor Lenny Curry to restore the city’s long-neglected African-American cemeteries which not only include the Moncrief Road cemeteries but also Old City Cemetery, Mount Olive Cemetery, and Hillside Potter’s Field. You can read about the Moncrief Road Cemeteries and many other abandoned places in my books, Abandoned Jacksonville: Remnants of the River City and Abandoned Jacksonville: Ruins of the First Coast.