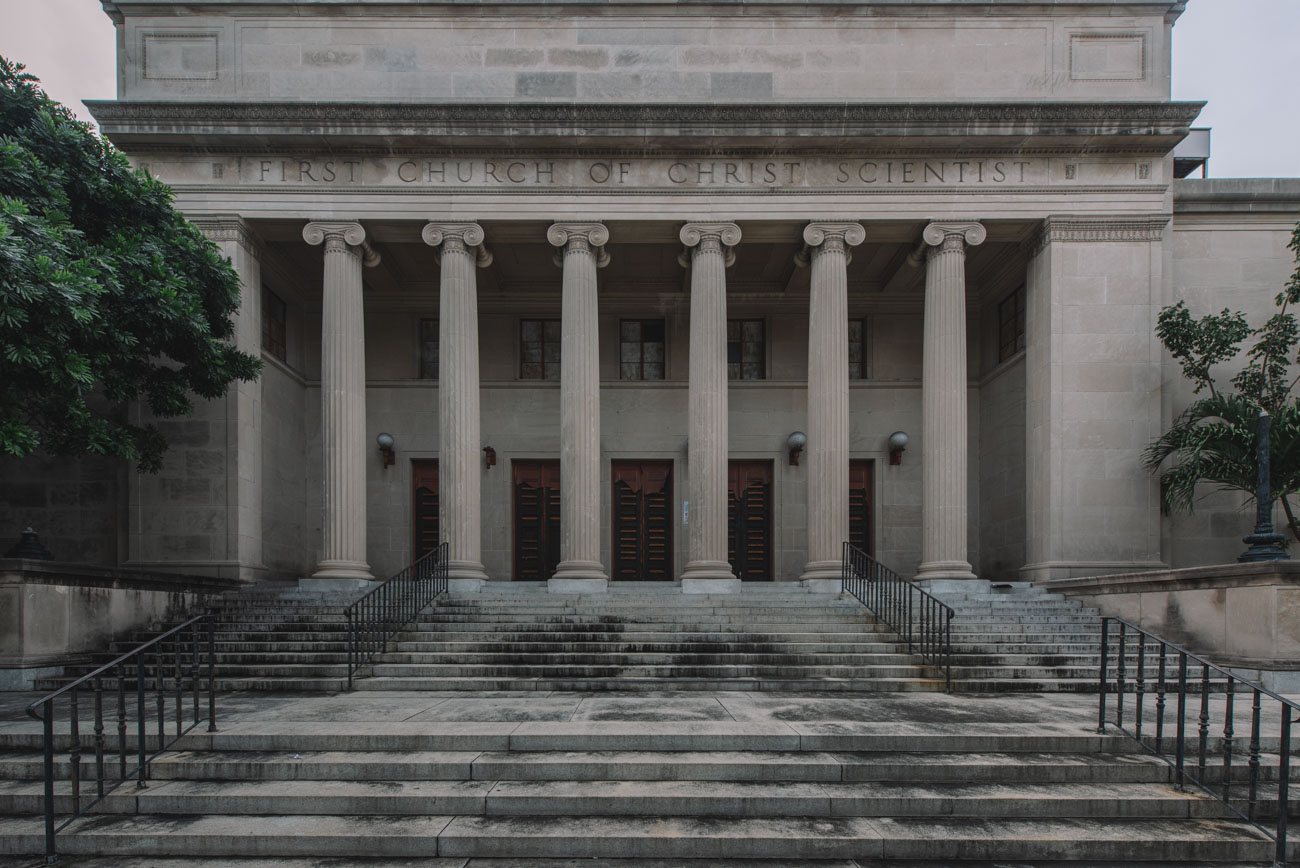 First Church of Christ, Scientist is a historic church building located in Miami. It was built in 1925 for the religious denomination of Christian Science and designed by one of the most prominent architects in South Florida, August Geiger, known for such works as the Dade County Courthouse, the Miami Women’s Club, and Miami City Hospital Building No. 1. It was listed on the National Register of Historic Places in 1989.

Several periods of Protestant Christian revival have been referred to by scholars as “Great Awakenings” that nurtured a proliferation of new religious movements in the United States. Groups such as Christian Science, the Unity School of Christianity, Divine Science, and the United Church of Religious Science were some that would be regarded as part of the metaphysical family of religion. From the 1890s, the liberal section of the movement became known as New Thought, in part to distinguish itself from the more authoritarian Christian Science.

Christian Science was founded in the 19th century on a set of beliefs that argue that sickness is an illusion and that it can be “corrected” by prayer alone. Its followers subscribe to a radical form of philosophical idealism, that reality is purely spiritual and the material world an illusion. They view disease as nothing but a mental error rather than a physical disorder, and that the sick should not be treated by medicine but instead by a form of prayer that seeks to correct the beliefs responsible for the illusion of ill health.

Its founder Mary Baker Eddy was born in Bow, New Hampshire in 1821 and grew up in a deeply religious Calvinist Congregational home, and due to her poor health, she was homeschooled for most of her childhood. Burdened by her health, Eddy sought relief from her sickness using alternative medicines such as homeopathy which she studied in depth. In 1862, she met Phineas Parkhurst Quimby, the founder of the New Thought movement who utilized hypnosis as a means of healing. He claimed he also discovered he could heal by suggestion alone, believing that illness was all in the patient’s mind meaning cure lies in simply discovering the truth. Although not religious, he believed had rediscovered the healing methods of Jesus Christ.

In 1866, Eddy fell on an icy sidewalk and left her in bed in critical condition and since Quimby had died just one month prior, she could no longer seek his aid. Instead, she turned to the Bible and after a few days of praying tirelessly, she felt suddenly well and began telling her friends how she was healed through prayer alone. Although she did not fully understand it then, this moment was what she considered one of the “falling apples” that helped her understand Christian Science.

After her fall, she began teaching and writing her ideas which she eventually published in Science and Health with Key to the Scriptures, considered her most important work. Her students voted to form a church called the Church of Christ (Scientist) in 1879, later reorganized as The First Church of Christ, Scientist, also known as The Mother Church, in 1892. She founded the Massachusetts Metaphysical College in 1881 to continue teaching students. Eddy also wrote numerous books and articles, founding the Christian Science Publishing Society in 1898 in order to distribute Christian Science literature.

Having been in financial trouble for some time, McClure’s was sold in 1911. The new owner of the magazine threw away Milmine’s research files, including the first edition of Science and Health, although some of it survived and was purchased by The First Church of Christ, Scientist from a New York manuscript dealer in 1920.

Eddy started a number of periodicals throughout her life, one of those being The Christian Science Monitor in 1908 which would go on to win seven Pulitzer prizes. The Monitor became a platform for what Eddy deemed as responsible journalism after a failed lawsuit against her which was instigated by the New York World, a pioneer in yellow journalism that circulated stories of scandals, sex, and other sensationalist pieces. The church’s Mary Baker Eddy Library later made three early drafts of Milmine’s works as another example of Eddy’s reasoning behind the founding of The Monitor.

Between the late-1880s and the early-1990s, there were over 50 cases where prosecutors charged Christian Scientists after adults and children died of treatable illnesses without medical care. In 1967, five-year-old Lisa Sheridan died of pneumonia, the first of many in the 20th century known within the church as the “child cases”. Her mother was convicted of manslaughter and sentenced to five years probation. It was after this case that the church began lobbying for religious exemptions. From then on, several parents were prosecuted but few were actually convicted as many of the final judgments were later overturned. The church was only held liable for one death of an 11-year-old boy but that judgment was also later overturned.

The First Church of Christ, Scientist was organized in Miami in 1916 and met in various places throughout downtown. Due to the rapid increase in attendance, a temporary structure was constructed but it still wasn’t sufficient enough. It was decided that a much larger building would be constructed and the present site was purchased by the Church in 1924. Although the auditorium was used after it was built in 1925, the congregation refused to dedicate the church formally until the debts on the building were paid. A formal dedication took place on March 7, 1937.

The building was designed in the Christian Science traditional style, Neoclassical Revival, by prominent Miami architect August Geiger. August Geiger was born in New Haven, Connecticut in September 1887, the son of Margaretha Rettenmeyer Geiger and Louis Geiger, a manufacturer of moldings and other fine woodwork for interior decoration. August Geiger was educated in public schools and graduated from the Boardman’s Manual Training School. Wanting to be an architect with a talent for drawing and design, he secured a position at an architecture firm in New Haven.

In 1905, Geiger moved to Miami, where he and his family spent their vacations and began working at an architectural firm for the next six years. The 10th registered architect in Florida, he opened in own firm in 1911 and opened a second office in Palm Beach in 1915. Geiger is recognized for introducing the Spanish Colonial/Mediterranean style to South Florida and was very popular with the wealthy industrial class who vacationed in South Florida during the winters. He also experimented with Mission, Italian Renaissance, Neoclassical Revival, and Art Deco architecture. Geiger was Carl Fisher’s official architect, designing many structures in Miami beach including the Lincoln Hotel, the Miami Beach Municipal Golf Course House, and Carl Fisher’s house. He was also appointed architect for the Dade County School Board. Many buildings he designed are listed on the National Register of Historic Places such as the ones listed earlier, Miami City Hospital, Building No. 1 at Jackson Memorial Hospital, the Dade County Courthouse in association with A. Ten Eyck Brown, the Miami Women’s Club, and of course, the First Church of Christ, Scientist.

The religion’s popularity peaked in 1936 with over 268,000 Christian Scientists in the United States and has steadily declined ever since. With the movement in decline, the church sold buildings to free up funds. In 2013, the Church of Christ, Scientist sold its building in Miami for $6.25 million. It was then resold in November 2014 for $14.25 million. In September 2015, the owner received approval for using the church building for commercial purposes. The initial plan involved constructing a condo tower next door and topping the church building with a parking garage. Due to the outcry from preservationists, the plan was changed to have the parking garage built below the condo tower.