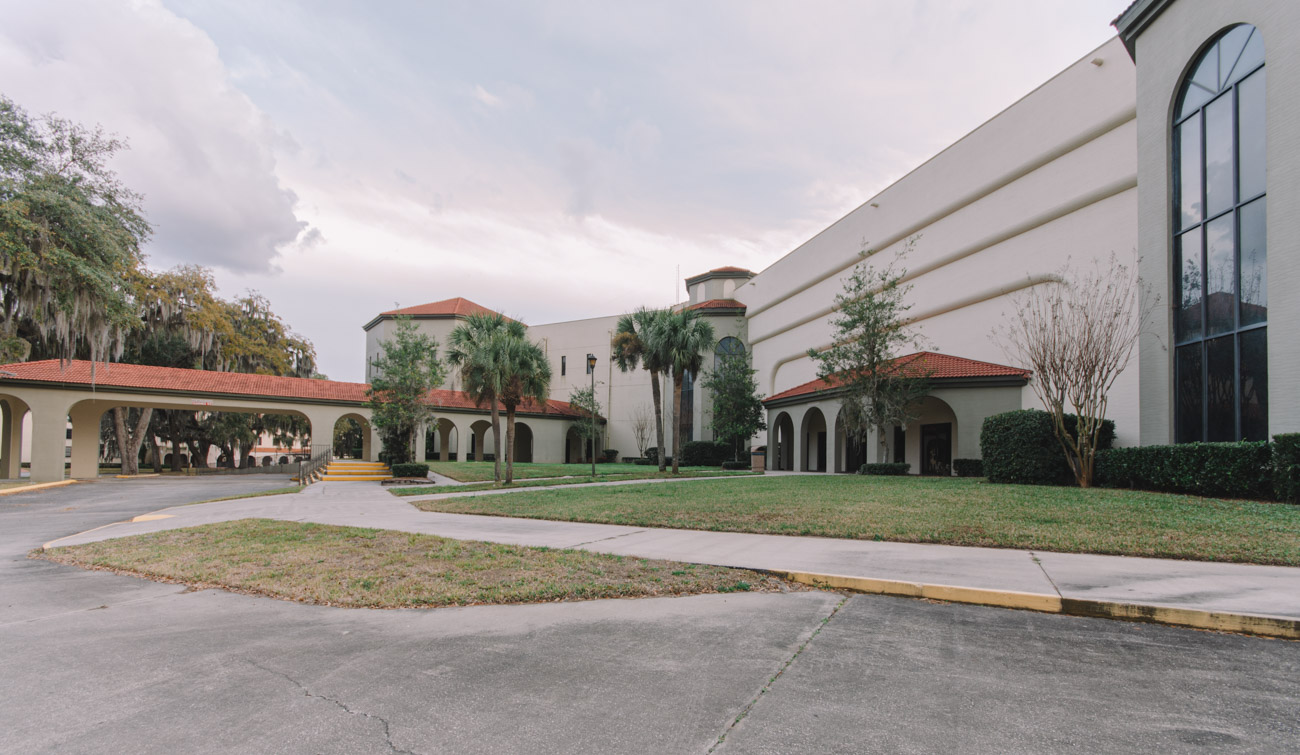 Without Walls Central Church was a Christian megachurch in Lakeland, Florida, and was the church’s second location. The history of how they came to own this property in Lakeland begins with the Lakeland First Assembly of God which was founded in 1921.

The church’s modern history though began when Karl Strader became senior pastor in 1966. Strader’s tenure saw a period of explosive growth. By 1980, the church had ballooned to 4,000 members and had overgrown its 1,850-seat sanctuary on Rose Street in Lakeland.

Looking to expand and build a new, even larger sanctuary, the First Assembly of God found 475 acres near Lake Gibson, stretching west to U.S. 98 and south nearly to Interstate 4; property that included the former retirement home for the United Brotherhood of Carpenters and Joiners of America which had closed in 1976. The church purchased this property, sold all but 125 acres, and began construction in late 1982 on a 155,000-square-foot facility built by Roe Messner with a 10,0000-seat auditorium. The new building opened in 1985, and First Assembly changed its name to Carpenter’s Home Church.

In 1989, the church suffered a split when about 800 members left in a dispute over Karl Strader’s leadership. Strader had long been open to charismatic practices such as spontaneous dancing and singing, which caused chagrin among some of the church’s more traditional members. Some 800 members broke away to form Victory Church.

In 1994, Daniel Strader, one of Karl Strader’s sons, was arrested on fraud charges and was later convicted. Daniel Strader had sold false securities and defrauded investors out of $2.3 million. He was found guilty in 1995 on 238 counts of securities fraud and was sentenced to 45 years imprisonment. The severe sentence resulted from applying the Racketeer Influenced and Corrupt Organizations Act. The scandal received considerable media coverage; membership of Carpenter’s Home Church dwindled even further, and it became impossible for the church to maintain its large facilities.

Married in 1987, Randy and Paula White divorced in 2007. By 2008, three years after purchasing the former Carpenter’s Home Church, Without Walls International put both the Tampa and Lakeland properties up for sale due to financial difficulties. The Evangelical Christian Credit Union, the California credit union that held the mortgage on the property, began foreclosure proceedings on both properties later that year. Two parcels of land were sold to the city of Lakeland which allowed for a settlement with the credit union in 2009, but by November 2011, the electricity had been turned off due to unpaid bills and the property was on the verge of being sold or going into foreclosure.

An audit later made public by a United States Senate committee chaired by Iowa Republican Chuck Grassley showed that Without Walls received $150 million from 2004 to 2006. The Senate report found the church spent tax-exempt ministry funds one year to pay nearly $900,000 for the couple’s waterfront mansion, over a million dollars in salaries to family members, and paid for the Whites’ private jet. Leaders of the church did not cooperate with the investigation. Although Grassley issued a report outlining his committee’s findings in 2011, no additional action was taken.

On January 1, 2012, Paula White became the senior pastor of New Destiny Christian Center in Apopka while her ex-husband Randy White resumed leadership of the Without Walls Church Tampa location on June 20, 2012, as the Lakeland property had been abandoned the previous year when the electricity was turned off. However, by October 2012, the Tampa property was under foreclosure proceedings by the Evangelical Christian Credit Union after failure to pay loans.

Paula White After Without Walls

On March 4, 2014, Without Walls International Church filed for Chapter 11 federal bankruptcy protection. In response, the Evangelical Christian Credit Union, which said the church owed it $29 million, called the filing a “litigation tactic” to prevent the foreclosure of two church locations. That same year, the United States Bankruptcy Court required the sale of properties. In response to this, Paula White stated that she had no responsibility in the matter as she had been on the Without Walls staff since 2012.

Paula White would serve as senior pastor of the New Destiny Christian Center until May 2019. White became a personal minister to Donald Trump after he watched her television show in 2002 and is credited for having converted Trump to Christianity. She was part of Trump’s Evangelical Advisory Board during his campaign for president, and she provided the invocation prayer during Trump’s inauguration ceremony. White also served as one of the president’s spiritual advisors and held Oval Office prayer circles with him.

On November 4, 2020, White appeared in a Facebook Live stream in which she conducted a prayer service to secure Trump’s reelection, repeatedly calling on “angelic reinforcement” from “angels” from Africa and South America as well as “an abundance of rain.” This was after it became apparent from election results that Trump was losing to Biden. The video featured White leading the impassioned prayer that included praying in tongues. It quickly went viral across the Internet and received much criticism and ridicule. At the January 6 Capitol attack, she offered the opening prayer before Trump’s speech.

In February 2015, developers Doug Cook and George Anderson purchased the former Without Walls Central property for about $3.75 million. They made plans to demolish the massive sanctuary to replace it with independent-living units for retirees in place of the church. They also made plans to renovate the former retirement home for union carpenters on the property. Demolition of the megachurch on the property began on March 16, 2015, and construction on the historic Carpenters and Joiners Home commenced soon after. Today, the former retirement home operates as Lake Gibson Village, a senior living community.

Without Walls International eventually moved into a much smaller facility off Grady Avenue in Tampa, still under the leadership of Randy White. By August 2021, White had stepped down and was replaced by Anthony J. Brown. Under Brown’s leadership, Without Walls flourished and launched the Vertical Tampa church in 2022.