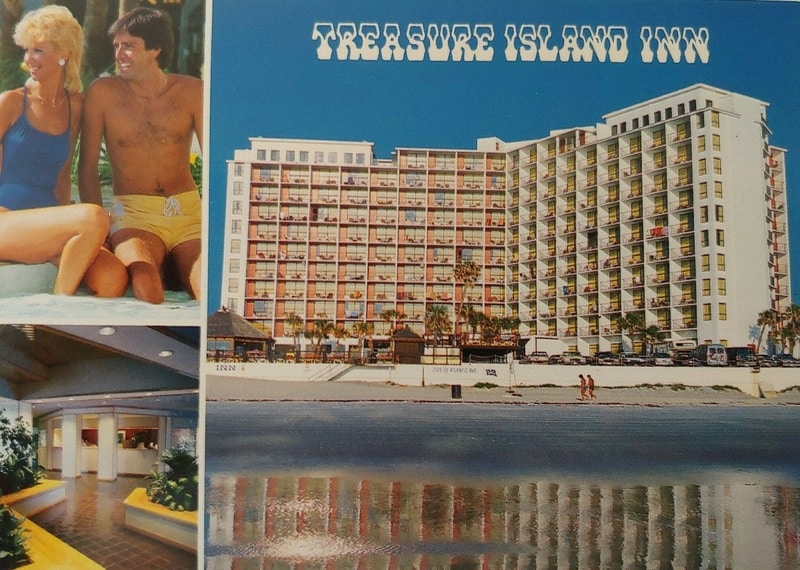 It featured a tiki garden with a bar, two swimming pools, conference facilities, the Billy Bone’s Tavern, and a grand entrance with a huge wooden, Polynesian-style, overhanging roof.

Like the Glass Bank in Cocoa Beach, the hotel sustained huge amounts of damage after the 2004 hurricane season and was closed down by the end of summer. The owners, Bray & Gillespie LLC, stated it would reopen by June 2005, but work halted during its reconstruction after a legal dispute with the construction company hired to repair the building. To make matters worse, Bray & Gillespie who used to own over 35 hotels in the Daytona area filed for bankruptcy.

When the city of Daytona Beach Shores filed suit in 2011 to get the building torn down, a dozen defendants were named because it was that unclear who owned it because of all the liens, bankruptcies, suits and countersuits. In the end, the court determined the property was under the ownership of RAIT Financial Trust, the lien holder.

Afterward, an agreement was established which required RAIT to either demolish or restore the building within the next year. In return, the city would forgive about $167,000 of the more than $800,000 in code enforcement fines the property has racked up over the past decade.

Rather than demolishing the building, RAIT began cleaning the area around the property with the idea of restoring it. The tiki overhang was removed, debris and trash were cleaned up, the pools were properly covered over, and the exterior was painted white. In 2014, a fire broke out in an elevator shaft while the building was being gutted. It was later found out that trash was being thrown into the elevator shaft by workers from the upper floors. By 2016, the property was clean and the building was stripped down, but construction had stopped.

In September 2017, the property was sold to the Jaymor Group who planned to transform the building into a Hyatt, making it the Treasure Island Hyatt Hotel. The newly renovated hotel two pools. a poolside cabana bar, rooftop bar, spa, and fitness center, as well as more than 16,000 square feet of event space and meeting rooms, and nearly 4,000 square feet of private club lounges. Construction started up again starting with the facade which was removed, but it wasn’t long before construction stopped, leaving the building in the same state it’s in today. The building has been left barren, unrecognizable to the grand hotel it once was.