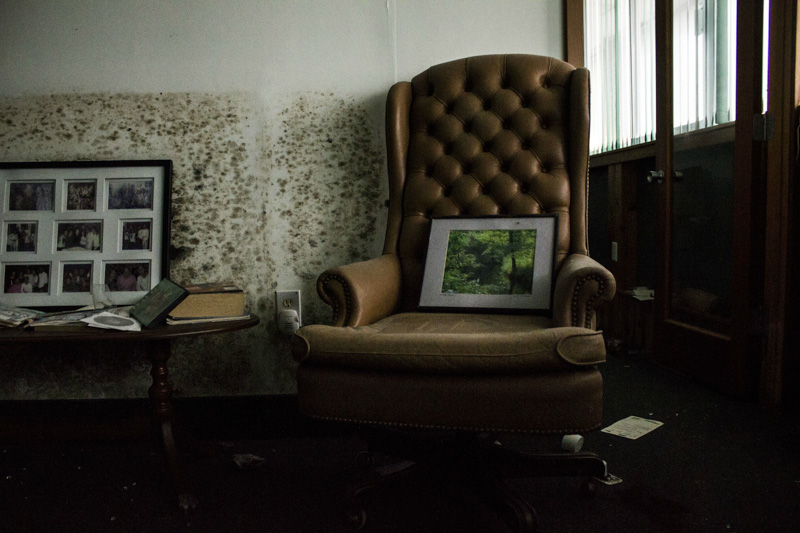 Considered by many to have been a Cocoa Beach landmark, The First Federal Savings and Loan Building was constructed in 1961, giving the city’s skyline a modern look for the time. The building was nicknamed “The Glass Bank” because originally the structure boasted glass windows on its entire exterior. The top floor was occupied by the “Ramon’s Rainbow Room”, a restaurant and nightclub which regularly hosted national politicians, astronauts, and Hollywood stars and was known for its great-tasting food and atmosphere.

In 1983, attorney Frank Wolfe purchased the top floor of the building, adding a windowless penthouse, and converted the building into a brutalist style by reinforcing the corners of the building with concrete. Its last tenants were Huntington Bank on the first floor, an Atlantic Nautilus fitness center on the upper floors, and of course, Frank Wolfe and his top-floor penthouse.

After taking heavy damage in 2004 from Hurricane Frances, the businesses on the bottom floors were forced to move out but Frank Wolfe remained in his penthouse on the top floor.

The building soon fell into disarray and the city became concerned with the broken windows, leaky roofing, mold and asbestos. This prompted a legal battle between Wolfe and the Glass Bank Condominium Association, which oversaw the rest of the building and wanted it torn down. Despite the fact that the bottom half of the building was in disrepair, Wolfe’s penthouse was in immaculate condition; clean and with running electricity.

Following a years-long dispute about what to do with the building, a three-judge appellate court panel affirmed that Wolfe owed millions of dollars for assessments, fees, and repairs to majority owner Joseph Yossifon who owned every part of the building except for the penthouse.

In January 2014, the condo association signed an agreement with Cocoa Beach officials to let the city declare the structure a nuisance, demolish it, clear it, and then have the owners pay back the costs of the demolition within three years. Wolfe rejected the proposal, but a court ruling in February cleared the way for the association to begin foreclosure proceedings against Wolfe. The day following the court hearing, Frank Wolfe was found dead in front of the Glass Bank by a self-inflicted gunshot wound. Wolfe’s estate cooperated with the decision to have the building demolished and in April 2014, the city granted permission to do so.

In May 2014, an orange cat was spotted by attorney Tony Hernandez from his office which sat right across from the Glass Bank. Knowing the building would be torn down soon, he began the “Save Morris The Glass Bank Cat” campaign in an effort to have the cat rescued. Because he was feral, he lived out his final days in a feral cat colony passing away in 2017 due to liver failure. On February 2, 2015, the building was demolished and was replaced with nothing but an empty lot.