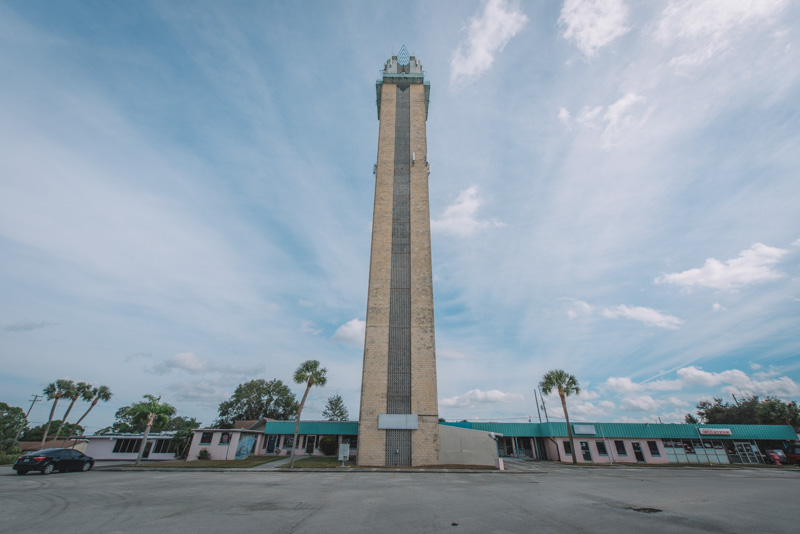 When Earnest Oakley Hunt moved to Orlando from Colorado in 1938, he dreamed of building an observation tower. After relocating to Sebring in 1947, he found the perfect place to build one in the nearby town of Lake Placid. Twelve years later, he and his business associate, Robert Gray, formed Air View Corporation with the sole purpose of building the tower. It was designed by Lakeland-based architect A. Wynn Howell and was Hunt and Gray’s own construction firm, Ridge Builders, erected the structure in 1960. Constructed of nearly 100,000 concrete blocks, it was the tallest concrete block structure in the world standing at 240 feet tall.

The Placid Tower opened January 1, 1961 to much fanfare. The grand opening lasted three weeks which involved a fireworks display at the top of the tower and over $7,000 worth in prizes given away to visitors. A gift shop with a camera department and a snack bar were located at the base of the tower. The Lake Placid Chamber of Commerce also opened an office next door to the gift shop. Nearby businesses began opening to benefit from the tower traffic including a motel, a restaurant, and a Phillips 66 service station.

In the late 1960s, the tower’s name was changed to “The Happiness Tower” in order to lure people in, claiming visitors a state of bliss when looking out from the top of the tower. Simultaneously, the tower was also called the “Tower of Peace”, confusing people even further. Because of low ticket sales, and the owner not paying their IRS taxes, the tower closed in 1982. It reopened in 1986 but it continued to struggle to bring in guests, despite adding a few more features such as a petting zoo and a payphone at the top of the tower billed as the “highest payphone in Florida”. The last owner to operate the tower as a tourist attraction owned it from 1992 until its closure in 2003.

It was sold to CHL Tower Group on November 6, 2003, which has operated it as a cell phone tower ever since. For over a decade, it still had two red “OPEN” signs at the top facing north and south when it clearly was not. The Tower View restaurant at the base of the tower closed in 2015. The city proposed reopening it back in 2008, using the Citrus Tower in Clermont as a model, but that idea died out pretty quickly.