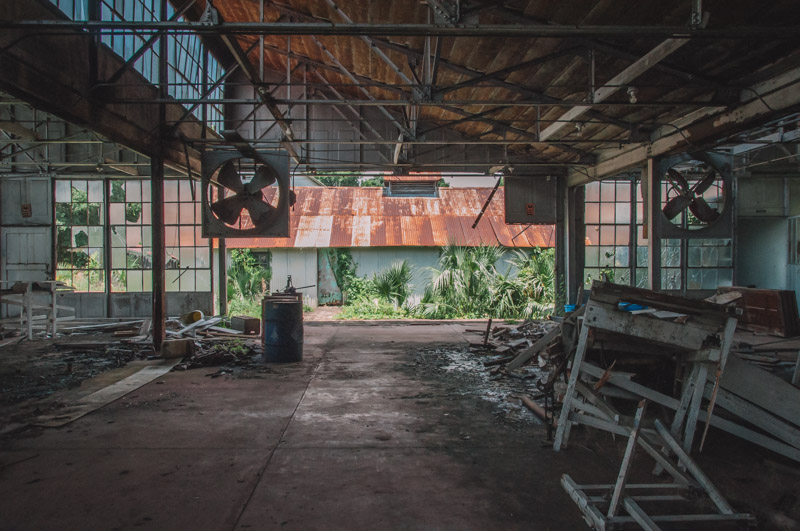 The Strawn Citrus Packing House District is a historic district containing twelve buildings and three structures and hasn’t been in operation since 1983.

In the late-1800s, the expansion of the railway system into southern Florida opened up the area to new industry and expanded potential business opportunities. Florida was promoted as a paradise on earth, where the “climate cured all aliments and the soil produced wealth with little effort”. The emerging citrus industry helped in the selling of land as settlers caught “orange fever”, assuming they could make good money selling to the northern states.

At the time, Florida was producing over 5 million boxes of citrus, but it all ended when the state was hit with devastating back-to-back freezes. In 1894 and 1895, temperatures throughout the state dropped, leaving many growers to watch as their crops died out. The first freeze occurred on December 20, 1894. Unfortunately, the state experienced a month of warm weather leaving the citrus groves more vulnerable for the second freeze on February 8, 1895. This event paralyzed the citrus industry and it wouldn’t recover from it for a couple more decades.

As the citrus industry moved south following the freezes, the few groves which survived gained widespread notoriety. One of these highly reputable groves was Thomas Strawn’s “Bob White” oranges.

Back in 1882, Theodore Strawn settled down in West Volusia County and began an orange packing operation. Even though the freezes of 1894-1895 eradicated most of the livelihoods of the farmers nearby, the business continued to prosper. In 1921, the original wooden packing house burned down and it was replaced by a new state-of-the-art steel building with a distinctive saw-tooth roofline.

The next few decades were kind to the Strawn family as the business grew. Of the oranges they grew, only the best were given the “Bob White” mark, named after the Northern Bobwhite quails the Strawn family enjoyed hunting. While the “Bob White” oranges were shipped up north, the lower-classed oranges were sold at roadside stands and markets in Florida. It was around this time in 1951, when John Strawn, the grandson of Theodore Strawn, returned from college to oversee a bookkeeper and others who tended the packinghouse’s business affairs.

Sadly, it would all end on the Christmas of 1983. On December 23rd, an intense Arctic high-pressure system moved out of Canada, moving far south within two days. As Christmas morning dawned, temperatures were in the teens, way below the 28 degrees it would take for frost damage to begin in citrus fruit. According to John Strawn, the orange trees were chopped down to their stumps. Statewide, nearly a quarter of the citrus crops were destroyed and in today’s money, would equate to about $4 billion.

Like the freezes of 1894-1895, the industry moved further south to the much warmer climates and the Bob White packing house closed down.

The packing house and other agricultural buildings on the property were placed on the National Register of Historic Places in 1993, along with a nearby sawmill along the railroad and a plot of land in the middle of town. Over the years, the sites have been heavily vandalized by thieves. At first, people went in to steal copper and anything of value from the structures until it was all gone. That didn’t stop them from returning, looking for anything they can scrap; and if they weren’t there looking to make a buck, they were there to simply destroy.

In 2008, a fire destroyed the machine shop containing various machinery, timber, and fuel. Two years later, another fire burned down a 40-foot by 50-foot outbuilding while damaging other structures nearby.

Even in the heavily neglected state it currently is in, it is still of historical significance as it depicts the earliest development of the citrus industry in the state of Florida. The Florida Trust for Historic Preservation’s listed the district on its 11 to Save in 2007 and is listed as endangered by the Volusia County Historic Preservation Board.

The property was sold in 2012 and since then the deterioration of the buildings has been accelerated, with some of the structures being demolished. Storms over the years have also caused considerable damage to the saw-tooth structure, but much of the damage looks manmade. Unfortunately, the future of the packing house looks grim and will probably be destroyed sometime in the future.