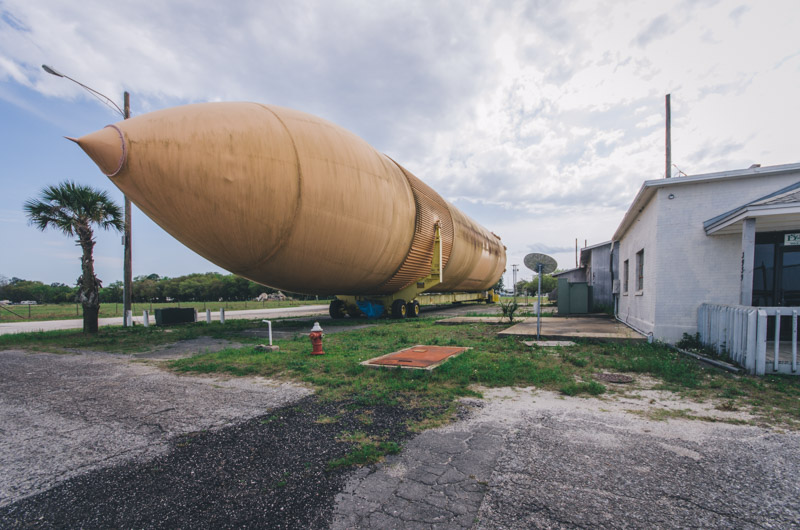 Sitting out near the docks of Green Cove Springs is a full-scale model of one of the Space Shuttle’s external fuel tanks. Many people know it’s there, but few know how it got there or why it’s even still there.

According to SpaceFlight Insider, the tank is the was the third and final test tank for the Space Shuttle Program and was used for structures/stress testing at NASA’s Marshall Space Flight Center in Huntsville, Alabama between 1977 and 1980.

After 30 years, the Space Shuttle Program ended in 2011 with the final flight of the Space Shuttle Atlantis. Upon closure of the program, NASA announced it was unloading space relics which included the external fuel tank. The initial winning bidder was located in California and decided that transporting it across the country was too much of a headache to deal with. The second winning bid was from the Wings of Dreams Aviation Museum in Keystone Heights, Florida.

With a group of volunteers who provided a 200-foot barge, two tugboats, and cranes used to transport the tank between land and barge, the external fuel tank was transported from Kennedy Space Center to Green Cove Springs.

It was supposed to only be staged there for a few months where it was to be towed to its new home in Keystone Heights. Moving the tank proved to be a logistical nightmare due to road conditions and low-hanging electrical and telephone cables and wires that run across the streets. According to Bob Oehl, executive director of the museum, two state highways would have to be closed and multiple power lines would have to be taken down.

it was to be put on display outside the museum and eventually, a cover would be put over it to protect it from the elements. As of 2018 though, the fuel tank is still at the Port of Green Cove Springs.