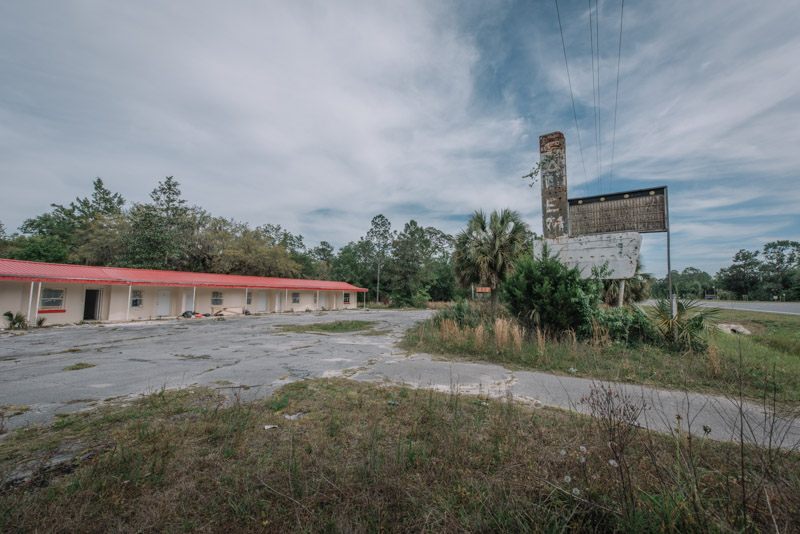 Between the towns of Perry and Cross City and along U.S. Route 19 is the small unincorporated community of Salem. The post office in Salem opened on April 16, 1915. The word “Salem” probably conjures up images of witches, hangman’s trees and burnings at the stake, but this community is nowhere near as exciting as that as it is made up of just a few homes, a gas station, and this vacant motel.

According to public records, this motel was built in 1954, just two years before construction began on the Interstate Highway System. As with many of these small communities, they don’t get many visitors passing through anymore and no visitors means no business. The motel has been closed for many years now, but its slowly being renovated by Southampton Properties LLC. Inside the building, I made a mental note of the date when the new windows were installed which was just a month prior to my visit.

The building next door looks to have been a general store with some apartments on the top floor. While Southampton Properties LLC also owns this building, unlike the motel, there is currently no type of construction occurring on this building. While photographing the building, a truck driver stopped to tell me that he hopes the building is saved as it is historic, though he was unable to tell me anything more than that.

I have historic information on the two story building in between the motel and gas station in Salem FL. Elvis Presley had once visited this business. Want more info contact me.

just a little update here. the motel has been fully renovated and is no ,longer an active listing to my knowledge. the general store has had a bit of work done to it, the brick exterior has been refinished and painted a sandy yellow color.