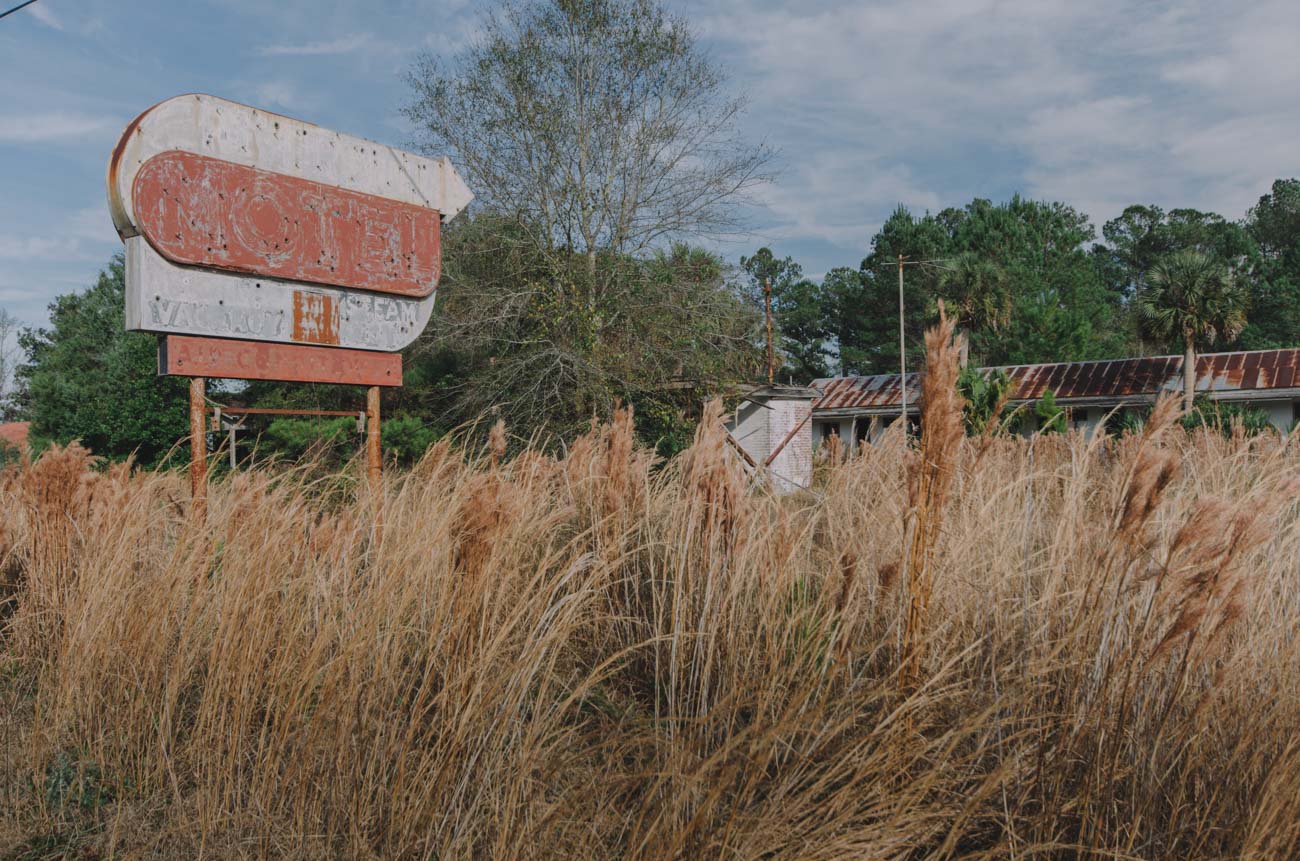 The Riverside Motel and St. Mary’s Liquors were located near the Florida/Georgia border but to start, a bit of context before we delve into the property’s history. Although the 21st Amendment repeals nationwide prohibition in the United States, it allows for prohibition under state or local laws. The rationale for maintaining prohibition at the local level is often religious in nature, as many Baptists and evangelical Christian denominations discourage the consumption of alcohol by their followers. Many dry communities do not prohibit the consumption of alcohol though, which could potentially cause a loss of profits and taxes from the sale of alcohol to their residents in wet (non-prohibition) communities.

Many people believe that once I-95 was built, many travelers stopped using the smaller highways and opted for the larger, faster, and more convenient interstates, which is what likely led to the demise of this business. Interstate 95 was signed in 1959, and the first section to be opened to traffic was in Jacksonville in 1960. By the end of the 70s, most of the highway was completed from Miami to the Georgia/South Carolina state line. While this may have affected business, something else occurred that might have had an effect on the closure of the Riverside Motel.

Knud Howard and Nellie VanZant Olfort took advantage of the neighboring dry communities and opened both the St. Mary’s Liquors and Riverside Motel in 1954, just inside the Florida/Georgia border. Knud was a Danish immigrant having moved to Chicago with his mother and father sometime between 1909 and 1910. Knud and Nellie married in Nassau County on March 17, 1943. According to Tim Gilmore, it’s likely Nellie was Knud’s second wife as records show a “K. H. Olford” divorced Genevieve Olfort in 1939. A 1945 census listed a 38-year-old Genevieve Olfort, a “housewife“, at the Florida State Hospital for the Insane in Tallahassee. She died in November 1987 and is buried at Hillside Paupers Field in Jacksonville, a place of burial for unknown, unclaimed, and indigent people.

In 1993, Nellie Olfort went missing. The Olforts owned large tracts of land behind their business and according to locals, Knud would not allow law enforcement on his property to search for her. Without his help, the case went cold. Years later, many offers came his way including one from a movie studio that offered to fix up the property in exchange to shoot some scenes there, but they were all refused. Knud’s unwillingness to help in the search for his wife nor allow anyone on his property led many to believe that he had something to do with her disappearance.

Following Knud’s death in 1997, the property was given over to Nellie’s sister, Lena Christian. It wasn’t until September 11, 1999, when the Camden County Sheriff’s Office was operating a routine search with their newly acquired side-scan sonar in search of possible suicide victims in the St. Mary’s River when Nellie’s car was found at the bottom, her skeletal remains found in the backseat. While some members of her family claimed Nellie had dementia and simply drove into the river, but the majority of the public suspected foul play at the hands of her husband.

Much changed since that fateful day. Fading letters could be seen along the side of the liquor store which read “WHISKEY” and “SOUVENIRS.” Beds were still made and Bibles could still be found on nightstands. For years, the old sign off the side of the highway which once read “RIVERSIDE MOTEL” pointed passersby to the derelict structures until he disappeared one day with its whereabouts unknown. All buildings on the property were later razed in 2020.