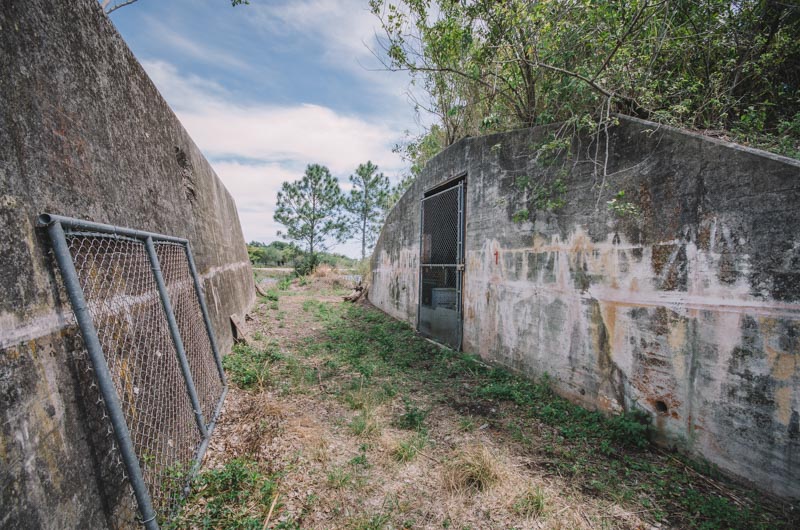 Lieutenant Nelson Grills and his crew of nine departed the Richmond Naval Air Station aboard a K-74, along with another airship, to provide escort for a freighter and a tanker that would be passing through the Straits of Florida. Grills’ orders were to pilot his airship to a position in the upper keys, while the other aircraft would take a longer, more southerly course. With the ever-present threat of German U-boats, the crew was alert to the danger. Shortly before midnight on July 18, 1943, the K-74’s radar picked up the two ships it was to oversee and then a third unidentified blip. The K-74 moved to investigate the unknown intruder.

In the warm night air, U-134 was running on the surface recharging its batteries as it closed in on the two merchant ships. Without time to wait for help from surface ships or fighter planes, Grills ordered his blimp to attack the submarine in an attempt to draw fire from the sub and save the vessels he was sent to protect. Fire from the deck gun of the U-boat ripped into the air, enveloping one of the blimp’s engines and igniting a fire, while the crew of the K-74 fired back and dropped depth charges. In a few very short minutes, it was over. The stricken airship settled into the water as U-134 slipped away.

The crew of the airship all survived the shelling, fire, and crash; unfortunately, one crewman, Isadora Stessel, became separated from the group and was killed by sharks. Grills faced intense scrutiny for his decision to attack without waiting for support, but it was determined that his actions probably saved one, if not both, of the merchant vessels. The entire crew was awarded Purple Hearts. It was not until 1961, when records from the Kriegsmarine were reviewed, that it was discovered that the actions of the K-74 had damaged U-134 and prevented it from diving, allowing it to later be sunk. In light of this new information, Grills was awarded the Distinguished Flying Cross. The K-74 was the only airship lost to enemy fire during the war.

After the Japanese attack on Pearl Harbor and the United States’ entrance into World War II, Adolf Hitler ordered his U-boats to move closer to the United States in order to attack ships traveling along the coast. Since the onset of the war, German U-boats had been wreaking havoc on Allied shipping throughout the Atlantic, but now ships were being torpedoed and left burning within sight of American coastal cities. With the U.S. Navy and Coast Guard’s surface ships stretched thin providing escorts to transatlantic convoys, blimps came into service for antisubmarine uses. Construction of bases began in early 1942.

One such base was Richmond Naval Air Station (NAS), just west of Miami. In 1941, the navy purchased 2,100 acres around the sawmill community of Richmond (where the base would get its name) and began what would be the largest construction project ever undertaken in Dade County up to that time. When completed, there would be a two-thousand-foot-diameter landing pad, eight support pads, two runways, a helium plant, three enormous hangers, twenty-five airships and three thousand men stationed at Richmond NAS.

The construction of the hangers would be an overwhelming undertaking. Work on each hanger was begun by building huge 148-foot-tall concrete door supports for each corner. These unique pillars would hold the massive steel doors and support the rest of the structure. Once completed, each hanger would be more than 1,086 feet long and 183 feet high and enclose a full seven acres. Combined, the three hangers would be able to accommodate the twenty-five airships assigned to the air station, along with airplanes, automobiles, machine shops, storage and parts and equipment to keep the blimps on patrol.

Richmond NAS was officially commissioned on September 15, 1942, and the impact on the war effort was quickly felt. With the blimps from Richmond, combined with the improvement to the Civil Air Patrol and the use of convoys for coastal freighters, successful torpedo attacks near Florida fell from 114 in 1942 to just 4 in 1943. In a stretch from November 1943 through May 1945, airships from Richmond NAS logged 730 days on continuous patrol without the loss of a single ship.

As it turned out, the greatest threat to the air station would not come at the hands of an enemy nation but from Mother Nature. In September 1945, a hurricane raced across the Atlantic headed for the Florida coast. In preparation for the impending threat, air bases from the area and the aircraft carrier USS Guadalcanal sent their planes to Richmond to be kept safe inside the massive, heavily built hangers.

On September 15, 1945, three years to the day after the base was commissioned, a large hurricane came ashore and made a direct strike on the hangers and buildings of the Richmond NAS. Winds over 125 miles per hour hammered the base, causing minor damage, but during the storm, a fire broke out in one of the hangers. Driven by the hurricane-force wind and fueled by paints, aircraft fuel, oil and the nearly two million board feet of Douglas fir in each hanger, the fire quickly spread to all three. By the time the storm passed, the massive buildings had been reduced to ash and rubble. The only things left standing were the steel doors and the twelve concrete supports. Gone, too, were the more than 350 aircraft, including Hellcats, Corsairs and P-51 Mustangs, along with 150 vehicles that had been brought inside to protect them from the storm.

With the war over and the German U-boat threat gone, the hangers would never be rebuilt. The base would continue its military life for several years as the Navy used the helium plant to refuel blimps, but the property’s importance to the area and the country would carry on for much longer. In 1946, with soldiers returning home and enrollments up, 1,571 acres were deeded to the University of Miami for the creation of the South Campus. It would be used to house students and create laboratories and research facilities, many of which are still in use today.

In 1961, the CIA moved into Building 25 on the South Campus of the University of Miami, using it as a listening post. Codenamed JMWAVE, Building 25 was established as the operations center for Operation Mongoose, a covert action to overthrow the Communist powers in Cuba that included the use of U.S. Special Forces, the destruction of Cuban sugar crops and mining the waters around harbors.

JMWAVE reached its peak in late 1962, during the Cuban Missile Crisis. Between 1962 and 1965, JMWAVE grew to be the largest CIA station in the world, other than its headquarters in Virginia. The station had an estimated three to four hundred professional operatives, as well as over fifteen thousand anti-Cuban exiles who were trained in commando tactics and espionage and were supported by the station in numerous raids against Cuba.

The CIA became Miami’s largest employer during this period. In addition to its main front company, Zenith Technical Enterprises Inc., the CIA created about three to four hundred other front companies throughout South Florida, as well as a large number of safe houses, cover businesses and other properties. JMWAVE’s activities were so widespread that they became an open secret among local Florida government officials and law enforcement.

On June 26, 1964, Look magazine published an article exposing Zenith Technical Enterprises as a front for the CIA. By 1968, JMWAVE had been deemed obsolete, and out of concern that any public awareness of the CIA’s activities would become an embarrassment for the University of Miami, the station was deactivated.

In the 1970s, Miami-Dade County was deeded part of the former base’s property for the construction of a new, larger zoo to replace the Crandon Park Zoo on Key Biscayne. Construction began in 1975, and the first exhibits were opened in 1980 as the Miami Metro Zoo. The parking lot for the zoo now occupies the two-thousand-foot-diameter main landing pad.

An attempt was made to remove the twelve concrete door supports by using dynamite. Eleven of them fell, but one did not. Radio antennas were placed on top, and it still stands today, serving as a relay station for the area 911 system. It remains one of the tallest structures in the county.

Richmond NAS is now home to two museums, a zoo, a university, a U.S. Coast Guard installation, and other government facilities. When seen from the air, the footprint of the air station is still very visible. The pads, runways and old hanger sites are clearly defined. However, the impact of Richmond NAS is not limited to the landscape or the war record of the base. It is also felt in the cultural and educational contributions to the community that is being made from the old blimp base.

The Gold Coast Railroad Museum began using part of the base’s railroad tracks in 1956 and moved to the location of Hangers #1 and #2 in 1984. In addition to its extensive railroad history, the museum also has a collection of photos and memorabilia for Richmond NAS. Richmond Air Force Station was constructed northwest of the blimp field in 1962. A radar facility, it housed three radar towers and remained in use until 1992, when another hurricane, Andrew, damaged the buildings and towers. You can read about Richmond Naval Air Station and many other abandoned places in my book, Lost Miami: Stories and Secrets Behind Magic City Ruins.