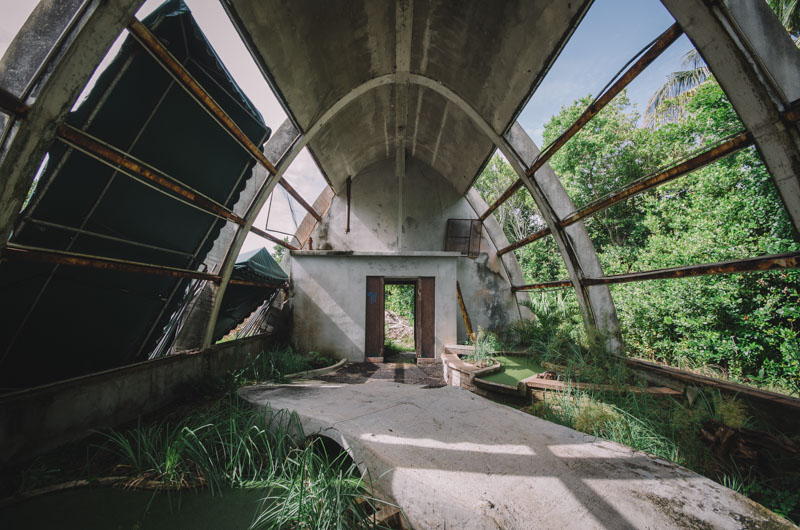 In late August and early September 1965, a hurricane spun across the Atlantic Ocean, looping, pausing and backtracking like some terrible ballerina trying to keep her audience guessing at the final act. For a while, it looked as if Hurricane Betsy would pass Florida altogether, but off Jacksonville, she performed one of her loops and turned back toward the Bahamas.

On September 6, 1965, Labor Day, Miami’s radar began to pick up the eye wall, and on the seventh, the National Weather Bureau warned of storm tides six to ten feet above normal in coastal areas. That warning would be far too late to protect the animals locked inside their cages at the Crandon Park Zoo on Key Biscayne. On September 8, as Betsy made landfall near Key Largo, more than three feet of water poured into the zoo. Many animals drowned while locked inside their concrete and steel cages, while others died of panic. In total, 250 of the zoos 1,000 animals died during the storm.

Betsy moved through Florida and into the Gulf, headed toward landfall in Louisiana, where it would leave more than seventy dead. Eventually, Hurricane Betsy would be titled “Billion-Dollar Betsy” because it was the first hurricane to cause more than $1 billion in damages. In her destruction, she would be the beginning of the end for the seaside zoo located on Key Biscayne.

Once owners of one of the largest coconut plantations in the United States, the Matheson family, among the pioneers in the area, donated the entire north end of Key Biscayne to the Miami-Dade County for the creation of a park to be open to the public in 1940. One of the stipulations of the donation was that the county would build a causeway from the mainland to the park. Almost immediately, there were accusations that the Matheson family had used the donation to secure the construction of a bridge that would vastly increase the value of their holdings still on the island, but critics aside, the roughly nine hundred acres would indeed become a park.

The Japanese attack on Pearl Harbor and America’s entrance into World War II delayed the construction of the causeway due to shortages of materials and labor, but in 1947, the Rickenbacker Causeway and the park opened to the public. The park would be called Crandon Park after Commissioner Charles H. Crandon, who arranged construction of the causeway.

One of the park’s features that would become a favorite of locals and garner international recognition came about by a sort of happy accident. In 1948, a traveling show became disabled and subsequently sold some of its animals to the county. The Crandon Park Zoo opened with two bears, three monkeys, and a goat purchased from the circus. Slowly, the collection began to grow through gifts and the purchase of animals, creating one of the most unique zoos in America overlooking the clear blue waters of the Atlantic Ocean.

Through the 1950s and into the early 1960s, the zoo continued to grow and expand. The addition of a small train that would take visitors on a one-and-a-half-mile trip around the zoo and through the lush tropical vegetation would make a lasting impression on the younger zoo-goers. Many locals have fond memories of riding the train with family and friends. It was a highlight of any trip to the zoo. Likewise, the creation of a small animal petting zoo would cement Crandon Park and the zoo as favorite destinations for locals and tourists alike.

The idyllic tropical zoo would not escape controversy. Beginning in 1960 and periodically after, local news outlets would run stories alleging animal abuse and cruelty, mostly stemming from the concrete and steel-bar enclosures in which the animals were confined. Public opinions and attitudes were beginning to change toward how zoos should treat their animals on exhibit.

The controversy did not stop Crandon Park Zoo from becoming one of the most popular. In 1965, with one thousand animals on display, it was recognized as one of the major zoos in the country. The tragedy of Hurricane Betsy would be a crushing blow. While events were set in motion that would eventually see the animals moved to a new facility, the staff at Crandon Park Zoo rebuilt and started back to work, generating a list of accomplishments that would raise the status of the zoo and the area.

In 1967, with more than 1,200 animals, Crandon Park Zoo was considered one of the top twenty-five zoos in the United States. The year 1968 saw the second white tiger ever brought to the United States, and in 1970, the zoo acquired the rarest of its inhabitants: a pair of Indian rhinos. Also, the first key deer ever removed from the Key Deer National Wildlife Refuge was placed on display. Then, in 1973, two bald eagles were hatched in captivity, marking the first instance of successful hatching anywhere in nearly fifty years.

With the growth of the zoo, public opinion toward the concrete animal enclosures and the constant fear of another hurricane, the decision was made that the zoo needed to be moved from its present location to a safer area. With that in mind, when the former Richmond Naval Air Station became available in 1970, Miami-Dade made a formal request for the property. The idea was that its location to the southwest of Miami would provide protection for the zoo and the animals in the event of another hurricane and also more room for expansion. Construction began in 1975 with the creation of a large moat. Meanwhile, Crandon Park Zoo continued to grow its collection of animals and expand its exhibits, and families flocked from all around the area to experience the zoo.

The new zoo would first open with the Preview Center and twelve exhibits in 1980. That same year, it was successful in breeding its two Asian elephants, Dahlip and Seetna, giving birth to their first surviving offspring, Spike—an extremely rare accomplishment even today. The Miami Metro Zoo officially opened on December 12, 1981, with the addition of the Asia Exhibit. The opening of the new zoo in the southwest part of the county would mark the end of the Crandon Park Zoo. Guests would no longer ride the train or be able to enjoy the ocean vistas while observing animals in cages.

The southwestern zoo also marked an end to something else. The Miami Metro Zoo would be one of the first free-range zoos in the United States. Animals would no longer be kept in cages, and as a symbol of that commitment, guests at the zoo’s opening were given a gift of small pieces of steel bars cut from the animal cages at Crandon Zoo. These were called “Pieces of the Past.”

Miami Metro Zoo would grow to be a jewel of Miami-Dade County and Florida, but sadly, Mother Nature would give a reminder that just because you are not located along the ocean does not mean you are safe from a raging hurricane. On August 24, 1992, Hurricane Andrew came ashore near Homestead and ravaged the whole of South Florida, including the zoo. Trees were downed, roofs were torn from exhibits and fences were destroyed. Tragically, one hundred exotic birds were killed when the aviary collapsed. In total, Andrew would be responsible for the loss of three antelopes, one ostrich, one gibbon, and the birds, but the devotion of the staff, the generosity of the community and the lessons of the past prevented more catastrophic losses to the zoo population.

Today, Crandon Park remains a popular destination, with tennis courts, beaches, a golf course, the Marjory Stoneman Douglas Biscayne Nature Center, a marina and much more. A member of the Matheson family still sits on the board for the park. Unfortunately, the Mathesons and the county have been involved in legal wrangling from time to time over the direction and management of the park.

The Crandon Zoo location is now a botanical garden where visitors can roam among lush tropical vegetation. Some of the old cages remain as a reminder of its history and how the animals were once kept.

Miami Metro Zoo is now called Zoo Miami and has become one of the foremost zoos in the country, with more than three thousand animals of five hundred species, forty of which are endangered. It also boasts more than one thousand types of trees and plants, a children’s area, a petting zoo, playgrounds, and a monorail circling the 750-acre park that evokes memories of a small train on Key Biscayne that ran around a small beach-side zoo. You can read about Crandon Park Zoo and many other abandoned places in my book, Lost Miami: Stories and Secrets Behind Magic City Ruins.