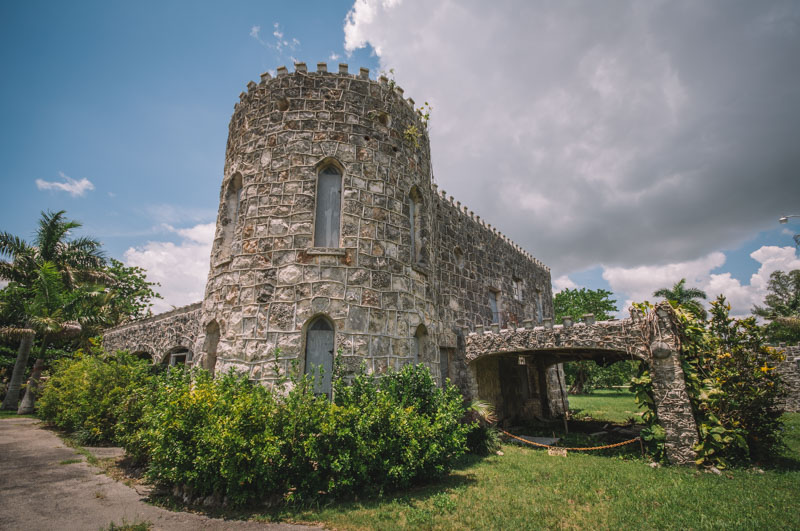 Old postcards called it “Coral Castle”, a local landmark known for its beautiful gardens and distinctive castle-like home. According to some locals, the construction of the house was inspired by the sculpture garden of the same name built by Edward Leedskalnin; some local residents even claim that Leedskalnin himself built the house. In reality, the home was built by Pearse Walker in 1929, seven years before Edward Leedskalnin moved to Homestead.

Pearse Walker was a retired granite and marble works dealer from the town of Collingwood in Ontario, Canada. He traveled much of the country looking for a place to spend his final years and settled on Homestead, a city of about 3,000 at the time, for its climate and atmosphere. He purchased 15 acres of land located on Redland Road and laid the foundation in January 1929 for a two-story 12-room castle. Walker designed the house himself and hired a stonemason to fit a cement into place several thousand tons of coral rock he had shipped from the Florida Keys and the canal banks of South Dade.

The Miami News described it as “an unusual and distinctive type of residence” and “one of the most attractive estates in the district“. Walker planted a variety of fruit on his property such as avocado, mango, and papaya alongside ornamental trees and tropical shrubbery. The coral castle became a local landmark of Homestead with postcards behind made which said “CORAL CASTLE, Homestead, Florida“. In 1995, it was also considered for landmark designation by the Metro-Dade Board of Commissioners. In the January 8, 1995, edition of The Miami Herald, it was listed as “Walker’s Coral Castle” along with the residence of Edward Leedskalnin and the Cuchille Residence, both homes which utilized the natural coral rocks of the area.

That same year, Walker, his wife, father-in-law, and daughter moved into what would be known as the “Coral Castle”. According to his daughter, Marie Walker Hunt, the family could hardly ever tell it was raining outside due to the 16-inch thick walls and steel-encased windows. When the catastrophic Labor Day Hurricane made landfall in September 1935, it brought heavy rain and wind to Homestead. Thousands of homes were destroyed and killed 423 people, but the coral castle wasn’t affected at all.

According to The Miami Herald, Walker “suffered a heart ailment and died in a hospital” in 1940. The Walker family sold the house in 1944. In 1946, the Cloningers moved from Chatanooga, Tennesee, and occupied the home until well into the 2000s. Lewis Oscar Cloninger Sr. was the head of the family and operated a tomato farm until his death on October 12, 1958, leaving behind his wife Margaret Elizabeth Blizzard, and his three sons, Ronald Eckman, Lewis Oscar Jr., and James Bertram.

In the 1980s, the house was owned by James and Deborah Hilson Cloninger who operated Cloninger Air Boats in the workshop just south of the property, and an agricultural field to the west. Although the exterior was relatively undamaged when Hurricane Andrew passed through South Florida in 1992, the interior was completely destroyed, along with the roof and second floor, leaving only a shell of a building. In later years, the property would be used by other businesses.

In 2005, Castlerock Nursery utilized the property’s large acreage for its operations. That same year, James and Debora had an unused 5-acre tract of land rezoned to make way for 14 single-family homes. In 2012, Wicked Sisters Magical Produce set up a fruit and vegetable stand in front of the Coral Castle House. During the off-season, a boiled peanut stand would operate in front of the building. In 2011, James Cloninger passed away, leaving his estate to his family.

The property, which included a two-bedroom, two-bathroom remodeled home, a large workshop, a separate office/efficiency unit and the Coral Castle was sold on March 2, 2015, for an estimated $1 million. Today, the property is used by Rancho Grande Castle Rock Farm & Nursery. You can read about the “Coral Castle” and many other abandoned places in my book, Lost Miami: Stories and Secrets Behind Magic City Ruins.

Hello is this still abandoned?

It is not. It’s been cleaned up and is used for events.