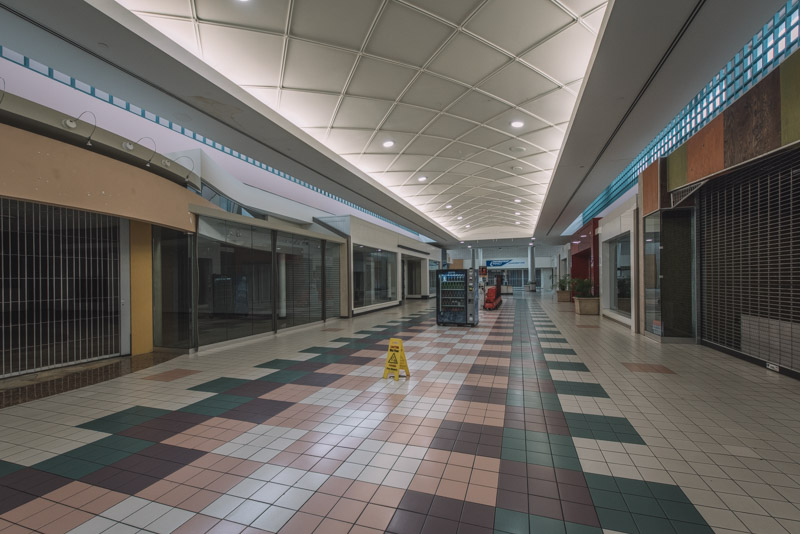 Opening on March 2, 1967, the Regency Square Mall in Jacksonville initially featured three anchor stores: JCPenney, May-Cohens and Furchgotts, as well as a Woolworth five-and-dime store a Piccadilly restaurant. In addition to those stores, the mall also featured the single-screen Regency Cinema and Annie Tiques bar and restaurant.

The mall was one of the most successful retail centers in the nation, with yearly average sales nearly double of what the nation’s yearly average sales was. To give back to the community, the owners of the mall turned over thousands of dollars in coins from their decorative fountains to charities. All types of social events, from art shows to science fairs to horticultural exhibits were held there as well.

In 1981, a $30 million expansion early doubled the size of the mall, adding Sears and an Ivey’s department store, and enlarging the already existing May-Cohen’s store. A food court and a six-screen AMC theater was also added midway along the east wing. May-Cohens briefly operated as a May Company Florida before being acquired by Baton Rouge-based Maison Blanche in July 1988. In early 1992, this store was sold to Mobile-based Gayfer’s.

The mall also underwent a $30 million renovation in 1998, which comprised the addition of a new, 24-screen AMC movie complex on the northwest corner of the property to replace the existing six-screen theater inside the mall.

A substation of the Jacksonville Sheriff’s office was also added to the mall during the renovation and in 1999, Regency announced formal conduct and dress codes to deal with offensive or intimidating behavior and gang activity. Crime became a huge issue at the mall with over 1,000 incidents being reported in 2004. Between September 2007 and September 2008, 650 unlawful acts were documented by the Jacksonville Sheriff’s Office, more than the combined total of crimes at Jacksonville’s other two major retail centers, The Avenues Mall and St. Johns Town Center.

On January 26, 2008, a suspect was killed by an off-duty policeman who was called to pursue a fleeing man who had stolen a pair of jeans from the mall’s Belk store. The shoplifter shot the officer four times before being fatally wounded himself.

Montgomery Ward closed in 2001, and the space would remain empty until 2006 when Homework Furniture moved in, but it was not long before it closed. In 2014, Belk began construction of a new store nearby and announced in September 2014 the Regency store would close on its completion which was February 17, 2015. On April 21, 2016, Sears announced that its store would also be closing as part of a plan to close 78 stores nationwide. The store closed on July 17, 2016. The closure of Sears left Dillard’s Clearance Center and JCPenney as the only anchors left.

In August 2013, the mall went up for sale and was sold in February 2014 for $13 million to Mason Asset Management and Namdar Realty Group of New York. In 2016, locally-based Impact Church announced that they would be moving into the former Belk location. In October 2019, construction began for the new church.

Also in 2016, International Decor Outlet announced its plans to open 86 storefronts in Regency Square Mall selling home furnishings and improvement products directly from international manufacturers. After signing a 10-year lease, the stores were supposed to open in summer 2016 but they never did.

International Decor Outlet is the defendant in multiple lawsuits by Chinese manufacturers who say they paid IDO but were not given the stores they were promised. IDO was also evicted from its headquarters in 2019 so with that in mind, it should be assumed that IDO has many financial issues which is probably a reason why they never opened the stores at Regency Square Mall.

It should be noted though that IDO claimed that the stores were never opened because of a leaky roof and faulty air conditioning which is the mall’s responsibility. The Jacksonville Automobile and Motorcycle Museum had plans to move into former Montgomery Ward space but abandoned those plans citing the same issues IDO had. In August 2019, the air conditioning stopped working throughout the mall so there is probably some truth to IDO’s claims.

Much of the west wing sits empty with entryways still advertising International Decor Outlet’s store openings. The east wing is the only accessible part of the mall, not including Dillard’s Clearance Center in the west wing of course. Many storefronts in the east wing sit empty with only a handful of stores and the Jacksonville Police Station still operating. JCPenney once located in the east wing of the mall closed down in 2020 after it was announced that the company would be filing for Chapter 11 bankruptcy and shutting down 242 stores throughout the country, citing the COVID-19 pandemic for these actions.