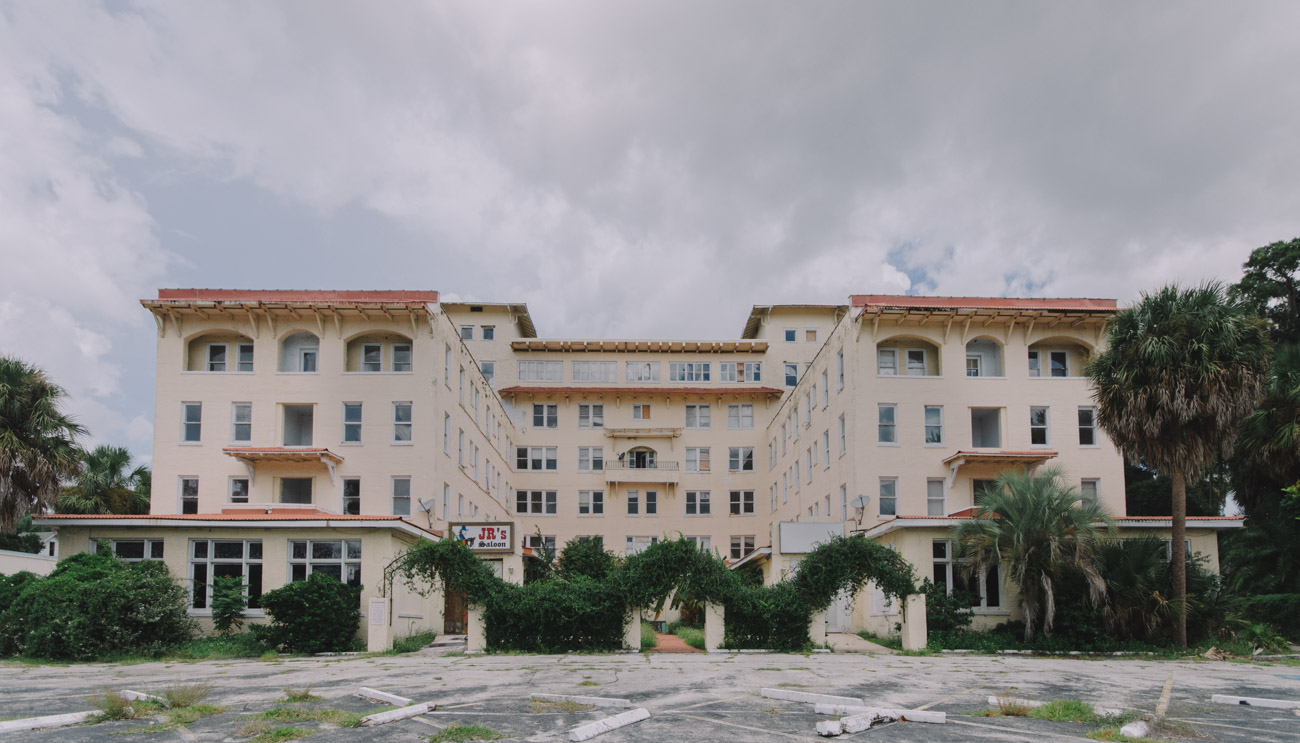 Prior to the construction of the Putnam Hotel, the first hotel on this site was built in 1880 by Henry Addison DeLand, the city’s founder. Surrounded by fields of citrus trees, it was called the DeLand Grove House. Although he was a major orange grower in the region, he invested heavily in real estate and convinced settlers to buy land from him. He promised that if they didn’t like the area they could sell the land back to him within the first two years of settlement. In addition to the hotel, he also donated land for a church, donated land for a school paid for half of the construction costs, and built the city’s courthouse.

Unfortunately, Florida had several freezes, the worst being the Great Freeze of 1894-1895 which killed the crops of the new settlers. Despite having lost $250,000 in the cold snap, DeLand felt obligated to honor his agreement. By 1896, he had sold off all his property in Florida as well as the DeLand family home in Fairport, New York. He moved back to Fairport and took a position at the Monroe County Chemical Company as president and manager with his daughter Helen P. DeLand as treasurer. Henry DeLand worked until he had paid back all of the investors. Having lost his entire fortune, he died on March 13, 1908, a penniless man.

The Grove House was managed by Henry DeLand’s sister and brother-in-law, Mr. and Mrs. O.P. Terry. The Grove House was later sold to Alfred Putnam of Utica, New York, in 1885 who renamed the hotel the Putnam House. Gardner Dyer Gould purchased the hotel in 1888 and renamed it the Putnam Inn. In 1906, Benjamin Edward Brown purchased the hotel and managed the hotel along with his wife. The couple lived in a house adjacent to the property, on the east side of the hotel. The hotel, which was constructed entirely of virgin timber, was destroyed in March 1921 when an explosion in the basement set the building on fire.

A new modern and fireproof replacement was commissioned in late 1922 and opened in 1923. The new Putnam Inn was designed in a Meditteranean Revival style by William J. Carpenter who was an early registrant as a Licensed Architect in the State of Florida, having moved to St. Petersburg in 1920. He was also a member of the national chapter of the American Institute of Architects and of the local chapters in Pittsburgh and St. Petersburgh, Florida while practicing there. Although he has little recognition, his works can be found all throughout the United States ranging from residential to commercial buildings. Including the Putnam Hotel, he also designed the city of DeLand’s first skyscraper, the First National Bank Building (1923), as well as the Scarlett & Jordan Building (1925), and the renovation of the adjacent Landis-Fish Building (1924). He also designed another hotel in Volusia County, the Cassadaga Hotel (1927), which was also constructed in the Meditteranean Revival style. Carpenter also worked on a number of schools for the county including Port Orange Elementary School (1924) and Bonner Elementary School (1926), both of which are listed on the National Register of Historic Places.

According to local historians, the Putnam Hotel was Florida’s first fireproof hotel having been constructed of steel and brick with a tile roof. The new construction was described to have had 128 units, a dining room, ladies’ parlors, and sunrooms The lobby measured about 28″ x 60″ with staircases on each side as well as a guest elevator. Benjamin Brown and his wife continued to operate the hotel until they passed it down to their son, Robert Horton Brown, and his wife, Sarah Hargreaves Brown. The Brown family sold the Putnam Hotel in 1957.

Since then, the interior has gone through extensive renovations but has retained much of the original exterior. Jerry Rocco purchased the hotel from Mrs. Katz in 1974 and according to him, the rooms were still accessed using skeleton keys. He renovated the building to include 46 apartments, decreasing the number of hotel rooms from the original 128 to just 26 rooms. The apartments contained a kitchen, a living room, a bedroom, and a bathroom.

Local residents say the building is haunted and visitors claim the building seeps in sadness. According to local legend, a hotel guest killed his wife and then committed suicide. People claim to have seen a shadowy figure roaming the halls or have heard walking and whistling when no one was there. The sixth floor is said to be the most active, although it has always been off-limits to guests and was used for storage.

After much research, I could not find anything resembling that crime occurring at the hotel. The closest I found was on February 10, 1984, 19-year-old Stephen Paul Hughes pushed his pregnant girlfriend, Elmyra J. Winfield, off of a third-floor fire escape. Winfield landed on the first-floor stairwell after hitting a beam on the way down, killing her and her unborn child. She died of a broken neck. At the time, the hotel was described as being run-down, and rife with drug dealing, and prostitution.

Hughes was charged with first-degree murder for the murder of his girlfriend and manslaughter charges for the death of a 15-week-old fetus. His legal defense argued that at the time of the murder, Hughes was so deeply impaired due to his use of alcohol and various other drugs that he could not be found guilty of premeditated murder. Instead of taking a plea deal of guilty for a lesser sentence of 15 years, Hughes chose to go to trial. Unfortunately, I cannot find the outcome of the trial nor details of Hughes’ current whereabouts, that is if he wasn’t executed.

The state of the building only worsened in the 21st century. Despite the deteriorating conditions, Stetson University and students and other juveniles continued to patronize the two bars at the hotel, JRs, and Karma, mostly because they served alcohol to minors. Jayne Rocco received the building in a divorce settlement in 2009, where she then tried to improve it. By that time, the rooms were going for around $600 a month, including utilities as well as internet service. Only 12 of the units were occupied though. In January 2011, the building’s tenants were issued eviction notices stating that the hotel was shutting down due to significant financial losses and gave residents just 15 days to vacate and relocate.

After soon falling behind on mortgage payments, she sold the property in June 2013 for $903,000 to Soly Halabi, senior managing director at Venture Capital Properties in New York City. He had planned to restore the property along with a partner of his, but the project never got off the ground. In May 2015, it was reported that the property was sold again to Summit Hospitality Management Group, a developer based out of Daytona Beach. A year later, the property was put up for sale once again.

The property was purchased in April 2018 by Mohamed Rashad via his company, Big Bubba Investments, LLC, for $1 million. It was reported that he owns a few single-family homes and one commercial building in Central Florida and that this would be his first multi-family project. Less than a month later, a massive fire broke out inside the hotel. Multiple floors and the back of the building sustained fire damage, and every floor sustained smoke and water damage. Eventually, the state fire marshal ruled that the blaze had been deliberately set and that gasoline was used as an accelerant.

According to Rashad, fire officials were ready to declare the building a total loss and have the insurance company pay Rashad the $5.6 million it was insured for. Instead, Rashad fought to prove the hotel was still sound. He hired a structural engineer to establish the building’s structural soundness. He waited two months while the engineer and the city argued over whether a permit for the roof repairs should be issued before or after the structural report was completed before he just went ahead and fixed the roof without a permit.

While he waited for a building permit to begin renovations, Rashad invested over $1 million into the Putnam Hotel over the next three years by installing new windows, perimeter fencing, and nighttime security. Sadly, he could only do so much and would later voice his frustrations with the city. The fencing, for example, was only installed after the city’s persistence in having one put up. Once it was installed, however, the city was in no hurry to inspect and approve it, and by the time they sent someone out, someone had cut the fence. Along with the fencing, the nighttime security which the city also required has done nothing to prevent vandalism at the site. After years of struggling with the city to obtain a building permit, Rashad sold the Putnam Hotel in September 2021 for $2.325 million. The new owners, Axia Partners, plan on renovating the building into residential apartments. They hope to have the building open for business by 2023, marking 100 years since it first opened in 1923.