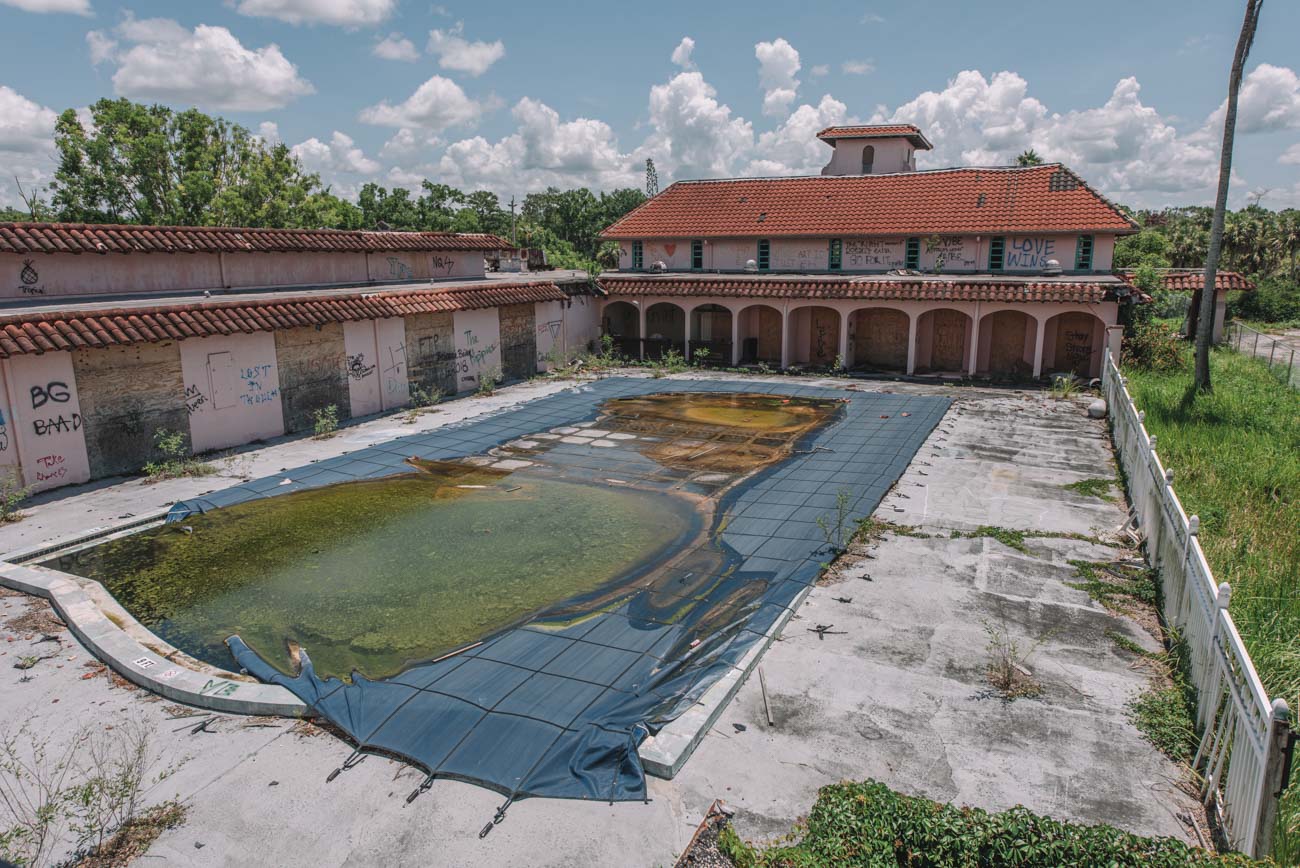 Port of the Islands Hotel

Leonard and Jack Rosen began their business career as street vendors in Baltimore. In 1957, using their earnings and high-interest loans, they purchased 103 square miles of mangrove swamps in the Florida Everglades with the intent to sell plots of land to prospective homeowners in the Midwest and Northeastern United States. Selling swampland to wealthy northerners was and still is a common practice seen throughout Florida, with many examples being found up along the Treasure Coast.

By the end of 1957, the community of Cape Coral was planned out and the Gulf American Land Corporation (GALC) was formed to develop the area.

The Gulf American Land Corporation planned day trips for potential buyers using their own airlines, Gulf American Airlines. Using a fleet of five Douglas DC-3s, people were flown from Miami to Fort Myers’ Page Field, the closest airport in the area, and then bussed over to the residential development. From 1958, GALC began contracting business to Modern Air to fly hundreds of prospective customers from the Northeast and Midwest down to Miami, where they transferred between Modern Air’s Curtiss C-46s and Gulf American Airlines’ DC-3s en route to and from Fort Myers. These flights were part of GALC’s free sales pitch and the flights were free for all prospective customers, who were also served a free meal on board the aircraft on each leg of their trip. GALC’s business eventually accounted for 25% of Modern Air’s total business.

Instead of borrowing from banks and lenders, the developers factored the sales contracts to pay for building the infrastructure. Plots were also oversold to protect themselves against buyers attempting to break out of any contractual agreements following a sudden change of mind and for potential defaulters. Canals were dug, streets paved, houses and businesses built and by 1963, the community had a population of 2,850 with 1,300 buildings completed or under construction.

Between the 1950 and 1960s, the Gulf American Land Corporation was the largest sales company in the United States. On June 29, 1966, Modern Air became a wholly-owned subsidiary of GALC after purchasing the airline’s entire stock for $807,000.

Using this same model in order to repeat the success they had in Cape Coral, Golden Gate Estates was platted, located just southeast of Cape Coral. 175 square miles of swampland was split up into 1.25-acre property lots and sold to unsuspecting buyers for over $15,000 for a lot that was actually worth around $3,000.

GALC built 183 miles of roads and dug 813 miles of flood control canals. The fill resulting from the digging of the canals was used to raise the land level to comply with minimum building elevation legal requirements. The canals drain 233 billion gallons of fresh water a year into Naples Bay, damaging the coastal saltwater ecology while causing the groundwater table to drop 2 feet. Due to this, the Florida Department of Business Regulation adopted real estate development reforms in the 1970s because of such abuses.

Potential buyers and investors were flown into a small nearby airstrip, and since the area was so remote, a resort was also constructed in 1967 named Remuda Ranch Grants. At Remuda Ranch, they were shown footage of Cape Coral, a successful community with churches, schools, and businesses, and assumed that GALC would duplicate their success at Golden Gate Estates.

But unlike Cape Coral, raw land was being sold here; the only thing promised were roads and canals, meaning there were no utilities or public services, and no other construction was going to be undertaken by GALC. In 1967, the State of Florida ordered GALC to suspend all sales for 30 days following allegations of fraudulent sales practices.

GAC Properties, as it was now called, expanded its operations and began flying prospective customers out to view its new Rio Rico development in Arizona. Due to the recession caused by the 1973 oil crisis, the contract with Modern Air to fly in prospective land buyers from the Northeast and Midwest to view its properties in Arizona and Florida was canceled.

Rising interest rates increased GAC’s borrowing costs, making it difficult for them to refinance the company’s public debt. In addition, GAC’s poor environmental record and controversial sales techniques attracted growing negative attention among the authorities, consumers, and environmental groups as well as the general public. These factors combined to force a reduction in residential developments and closure or disposal of non-core activities, including GAC’s computer leasing business and Modern Air.

By 1974, only 10 percent of Golden Gate Estates was developed and it was at this time that county officials figured out that the project, with limestone roads and no centralized water or sewer system, could not support such a large number of platted lots. That year, the county downsized the property, requiring a minimum of 2.25 acres to build a house. In 1975, GAC filed for Chapter 11 bankruptcy protection.

During this time, the county took over maintenance of the roads in the Golden Gate Estates area. In 1985, the state began purchasing lots in the southern part of Golden Gate Estates under its Conservation and Recreational Lands Program. The acquisition had proceeded slowly, hampered by the administrative burden of contacting over 17,000 owners who were located in opposite parts of the country.

The Picayune Strand State Forest was officially named in May 1995, the fourth largest state forest in Florida and is named after the largest of several cypress strands that once occupied much of the eastern portion of the property. In 1998, the federal government provided $25 million in aid to the state to help bring the land acquisitions to completion.

Further south where GAC’s office, resort, and airstrip were located, ownership changed hands several hands over the next couple of decades until eventually, the Adventure Resort, the marina located behind it, and the Hotel were all operating under separate owners. A community was started nearby known as Port of the Islands, started in 1994 when the first condominium building was constructed and where everything in this small area gets its name from.

Although I couldn’t find any actual evidence or reports, there are stories of the abandoned roads of Golden Gates Estate being used in the 1970s as landing strips for Douglass DC-3s, arriving from South America with shipments of cocaine. Some locals in the area even claim that the hotels were operated by drug cartels into the 1980s.

Ports of the Islands Hotel

The hotel was purchased by Gopal Motwani and his wife, Nirmla Motwani, in 2002 for $275,000. According to him, he spent over $200,000 to fix up the hotel which had sat empty for many years, including buying furniture and installing a new electrical system, sprinkler system, and carpeting. The hotel didn’t open though until 2006 due to what Gopal claims were an unsupportable tax bill of $133,000 a year. The Port of the Islands Hotel operated for seven years before shutting down in 2013. At that time, Gopal owed $548,446 in unpaid taxes and more than $1.16 million for a loan the Motwanis took out from the Bacardi Foundation in July 2005.

During its operating years, guests complained about missing doorknobs and broken locks, bug-infested bedding, kicked-in doors, rusty faucets, musty smell, deserted lobby, and pea-green pool. The pool was shut down indefinitely after failing inspections for several years by the Florida Department of Public Health. Employees at the Adventure Resort across the street were no strangers to what they described as “drunks and pill-heads” who lived at the Port of the Islands Hotel long-term, coming over to use the Adventure Resort’s pool. Due to the Adventure Resort and Hotel’s similar names and architectural styles, travelers often confused the two with many regretting booking a room with the latter.

Along with the Port of Islands Hotel, the Motwanis also owned the Bel-Aire Motel in Springfield, Illinois. The motel was known to cater to low-income, long-term residents with rooms going for about $170 a week. Neighbors often complained about drug use and other illegal activity at the motel and one article was written about them describing the Motwanis as slumlords. In May 2013, the Motwanis were ordered to pay $114,600 for 382 code violations.

Gopal Motwani died on September 14, 2014, at the age of 70. Due to unpaid taxes, Collier County became the owner of the property in January 2019, which forced a public sale. When there were no offers for the property within the three years of the advertised sale, the county got the deed free and clear of all tax certificates, accrued taxes, and liens of any kind. Now in charge of the property, the county quickly moved on demolishing the structures, allocating $388,444 towards its destruction. The Port of Islands Hotel was demolished in early-January 2021.