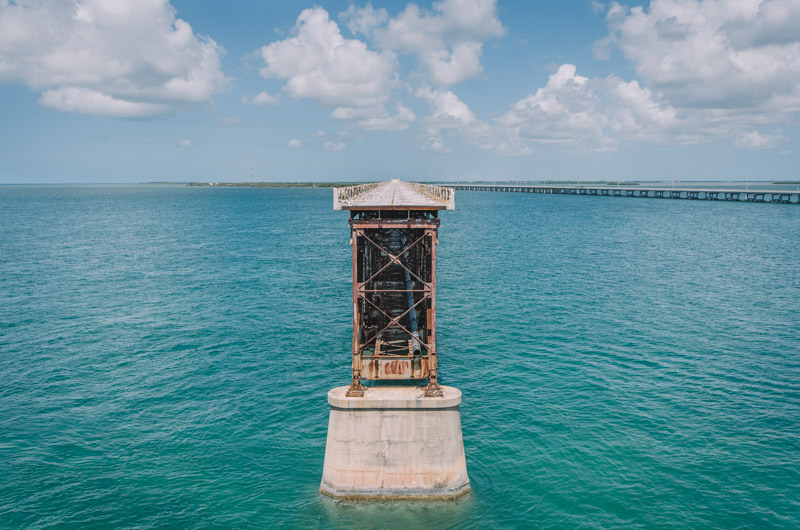 Located on the west end of Bahia Honda Key, the bridge was originally built between 1905 and 1912 by Henry Flagler as part of the Overseas Railroad. Its construction was carried out by Joseph C. Meredith who passed away before the project was completed, wherein Henry Flagler’s chief construction engineer, William J. Krome, continued on with his work. It was intended to carry a single track of the Florida East Coast Railway across the Big Spanish Channel from Bahia Honda Key to Spanish Harbor Key. Due to the channel’s depth, being 24-feet at its deepest point, the Bahia Honda Bridge was built with a steel truss construction as opposed to a concrete arch form that was predominant throughout the Overseas Railway.

The bridge was damaged during the Labor Day Hurricane of 1935 to the point that the FEC sought to abandon it before it was purchased by the State of Florida. Rather than rebuilding the bridge, the existing foundations were repaired and were converted to become part of the Overseas Highway in 1938 by adding the deck on top of the existing truss. The bridge served as the primary mode of transport to the lower keys and as the main evacuation route.

In 1980, a new four-lane bridge was constructed just a few hundred yards north of the old bridge, replacing the old route of U.S. 1. Two of the truss spans of the old bridge were later removed to allow boat traffic, as the new bridge has an increased span height.

The original bridge still remains, though it has fallen into a state of disrepair with signs near the water warning boat traffic to watch for falling debris. In 1979, the Overseas Highway and railway bridges were added to the National Register of Historic Places which includes Long Key Bridge, Knight Key Bridge, and the Old Bahia Honda Bridge. Maintained by Bahia Honda State Park, the easternmost section of the bridge is open to pedestrian traffic and provides a scenic overview of the area.