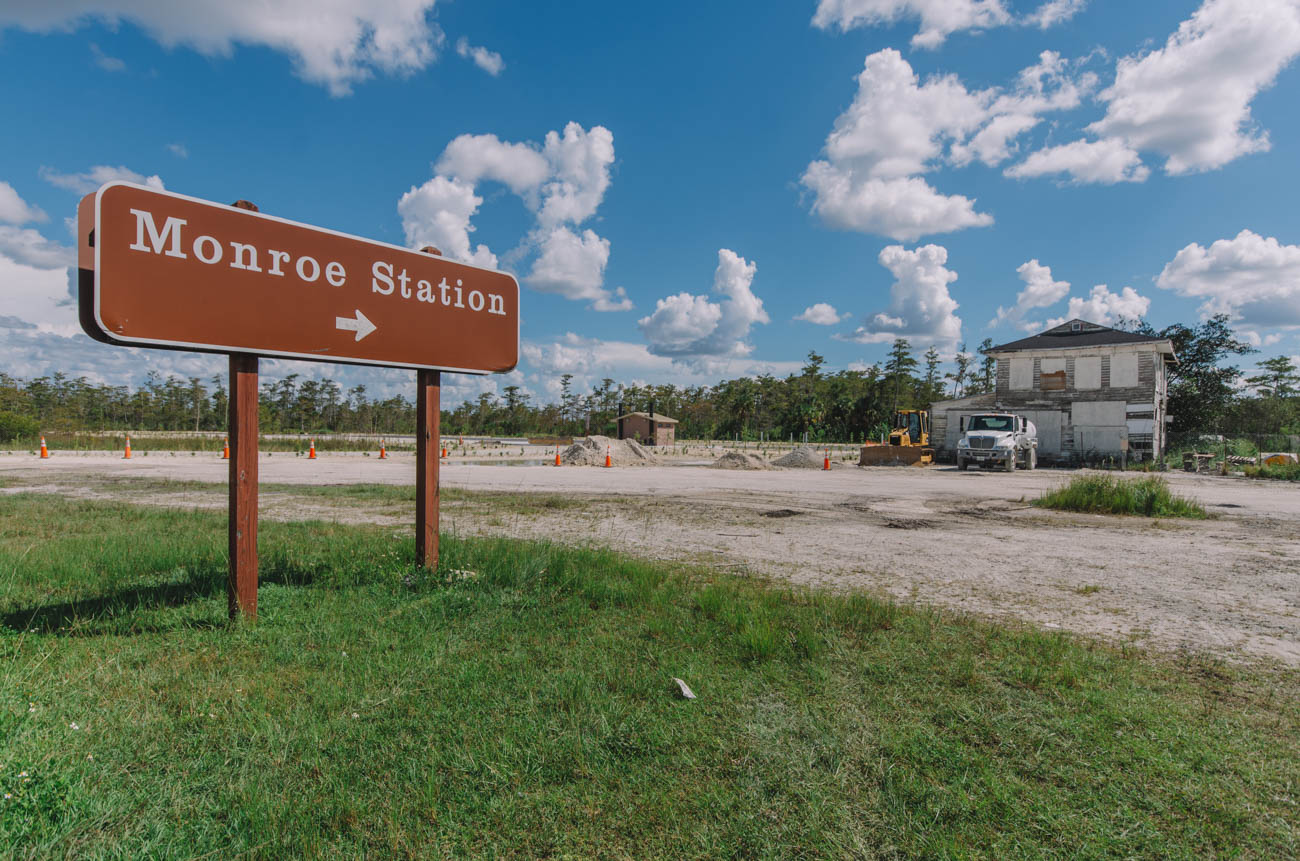 Built in 1928, Monroe Station was located on the Tamiami Trail, halfway between Miami and Naples, and was one of six waystations established by Barron Collier to service motorists traveling the newly constructed 107-mile section of the Tamiami Trail between Naples and Miami.

Operated by husband-and-wife teams, these stations were situated every ten miles along the portion of U.S. Highway 41 that linked Naples and Miami, offering fuel, food, and other necessities. Each station hosted a restaurant with a restroom on the ground floor and living quarters on the top floor for the husband and wife. The stations also provided roadway security in the form of the Southwest Florida Mounted Police created by David Graham Copeland. Appointed by the Collier County Sheriff’s Office, the husbands would patrol a five-mile stretch on each side of their stations by motorcycle during daylight hours to assist motorists in need. These men became the foundation for the first Florida Highway Patrol.

Occupants Throughout the Years

In November 1928, Monroe Station was first operated by William Irwin, his wife Nettie, and their two children. William Irwin died less than two months later, on January 19, 1929, in a head-on collision while on patrol on his motorcycle.

William J. Weaver was appointed as Irwin’s replacement by the Collier County Sheriff’s Office on January 26, 1929. His wife, Lillian, and their two daughters had moved into Monroe Station with him by the middle of February. The Weavers remained at Monroe Station until 1932. Lillian Weaver recalled that when she and her husband departed Monroe Station in 1932, a woman named Bertha and her daughter assisted them. She added, “Bertha then married Earl McGill, and they took over the station when we left.” It is not known how long the McGills stayed at Monroe, but it’s likely they left when the Southwest Florida Mounted Police was disbanded in 1934.

Along with the collapse of the land boom in 1926 and the worldwide recession in 1929, the State Highway Department became responsible for enforcing laws on state roads in 1931, and the Division of Traffic Enforcement was created in 1934. These factors led to the eventual demise of the Southwest Florida Mounted Police.

In the 1930s, Barron G. Collier began experiencing financial problems that most likely had an impact on the Collier Corporation’s Manhattan Mercantile Company, which managed the stores in the company town of Everglades City and the six service stations along the Tamiami Trail. These factors, along with the worsening economic conditions at the time, led to a reduction in travelers along the Tamiami Trail and, in turn, the closure and change in ownership of the Tamiami waystations. Despite selling some of the stations, the Collier Corporation retained ownership of Monroe Station. It was suggested in a 1976 family history that Barron Collier “never lost complete faith in Florida’s future as an investment and as a home place for millions of Americans.”

Keith King moved into Monroe Station on September 1, 1960, along with his family and stayed there until May 30, 1961, when they sold the station to Milton and Holly Arnold. The Arnolds lived there for just five months before selling it back to the King family in October 1961. The Kings lived at the station for a few years until they sold it again to Dixie Webb in the late 1960s. Dixie Webb stayed at the station only from Friday to Sunday, but his manager, “Dynamite,” stayed there full time from 1970 to 1972, before it was sold.

In the early 1970s, Monroe Station was operated by “Big” Joe Lord and his wife, Susie. It was said that Big Joe was always angry, be it at Vietnam War protestors, pot smokers, or men with long hair. He was also very open about his hatred for the government, which was poised to purchase the Big Cypress swamp at the time and possibly put him out of business. Sure enough, in 1974, the Big Cypress National Preserve was established to ensure the preservation, conservation, and protection of the natural scenic flora and fauna of the Big Cypress watershed. Soon after, the Lords were forced to remove the gas tanks at Monroe Station, which was a big hit to their profits.

Monroe Station would close in 1987 due to a loss of profits throughout the years. Big Cypress National Preserve later took over ownership of the station, boarding it up and ultimately neglecting it for years. It sat empty but was used in a movie called Gone Fishin’, released in 1997, starring Joe Pesci, Danny Glover, Rosanne Arquette, and Willie Nelson. Monroe Station was added to the National Register of Historic Places in 2000 without the knowledge of the National Park Service. The building was damaged in 2005 by Hurricane Wilma, requiring that a decision be made about the future of the historic structure.

On April 9, 2016, the building was destroyed in a fire by a group of Instagrammers from South Florida. One man climbed onto the roof to “spin steel wool”, a photography technique that involves tieing a burning piece of steel wool to a rope and spinning it, while two other men were on the ground shooting photos. They claim when the fire sparked, the three of them initially tried to put it out but because it spread so quickly, they decided to flee from the scene instead. Within 48 hours of the blaze, Bronson Lok of West Palm Beach turned himself in and admitted to causing the fire. He was charged with a misdemeanor. Monroe Station was delisted from the National Register on May 15, 2019.

You can read about Monroe Station and many other abandoned places in my book, Lost Miami: Stories and Secrets Behind Magic City Ruins.