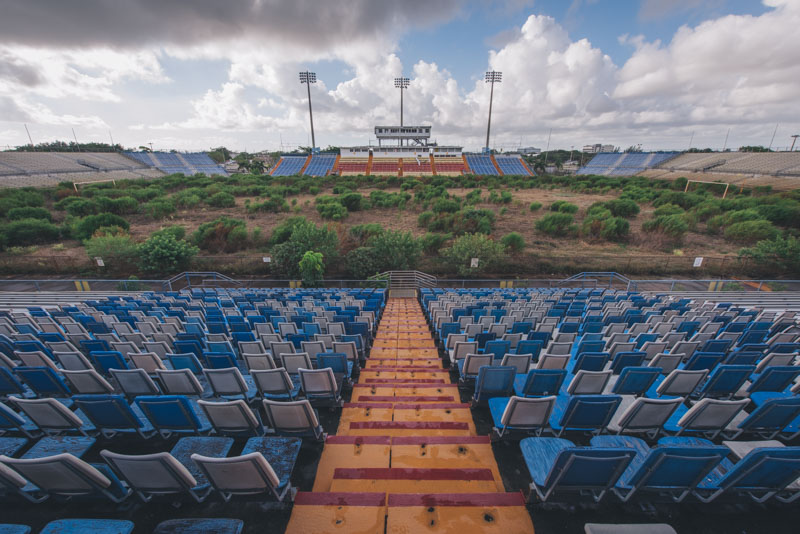 Lockhart Stadium was dedicated at a football game on September 18, 1959, named after former city commissioner H.Y. “Doug” Lockhart. It was originally designed to host American football games and track and field competitions for four local high schools: Fort Lauderdale High School, Stranahan High School, Northeast High School, and Dillard High School. Occasionally, Lockhart Stadium was used for soccer and took on a substantial role as a soccer venue in 1977, when the Miami Toros of the original North American Soccer League relocated to the stadium, renaming themselves the Fort Lauderdale Strikers. The Strikers played there until 1982 when they moved to Minnesota.

On November 23, 1980, the United States men’s national soccer team defeated Mexico 2-1 in a World Cup qualifier at Lockhart, the first U.S. win over Mexico in over 46 years. On a somewhat unrelated note, Billy Graham’s final crusade in South Florida took place at Lockhart in 1985.

After the Strikers left, the stadium largely returned to its original use of hosting high school football games. In the late 1990s, the stadium would host Miami Dolphins scrimmages during training camps.

In 1998, the stadium underwent a $5 million renovation for the Miami Fusion F.C. of Major League Soccer (MLS), converting Lockhart into a 20,000-seat soccer-specific stadium. Though the stadium was host to many high-profile soccer games during this period, the Fusion was eventually contracted out of the league along with its other Florida-based team, the Tampa Mutiny, in which they ceased operations and folded.

Lockhart Stadium was once again refitted for use by the Florida Atlantic University Owls college football team. The Owls would stay there until 2011 when they moved to the on-campus FAU Stadium in Boca Raton.

In 2009, Miami FC moved to Lockhart Stadium from Miami, changing its name to the Fort Lauderdale Strikers in 2011. The Strikers played there until 2016 when they announced they were moving to a stadium at Central Broward Regional Park. While the team’s owners said the move was due to the renovations Lockhart needed which the city wasn’t going to pay for, other reasons were thought to be due to the move as the Strikers quickly folded due to financial issues.

A $70-million water park Schlitterbahn Water Park was to be constructed at Fort Lauderdale Stadium, using portions of the old stadium to construct a castle-like entrance that would include lodging, dining, and shopping facilities. The park was planned to eventually be expanded around Lockhart Stadium. The project was stalled due to a lawsuit by nearby Rapid Water Park.

In March 2017, it was ruled that Schlitterbahn’s lease on the property was invalid as the city never followed its own charter by awarding the property lease without conducting a competitive bid process. Premier Parks LLC eventually won the bid for the project and planned to build a Wet ‘n Wild water park on the site. As part of the deal, Premier Parks was to renovate Lockhart Stadium but because they could not afford those renovations, the deal eventually fell through.

In January 2019, Inter Miami CF, a soccer team for Major League Soccer, announced its plans to use the Lockhart Stadium site for its new headquarters, training grounds, youth academy, and home of the future United Soccer League (USL) team. The new development will also include an 18,000 seat stadium which will house the USL, and will also allow Inter Miami CF to use the stadium for the first two seasons while the Miami Freedom Park is under construction.