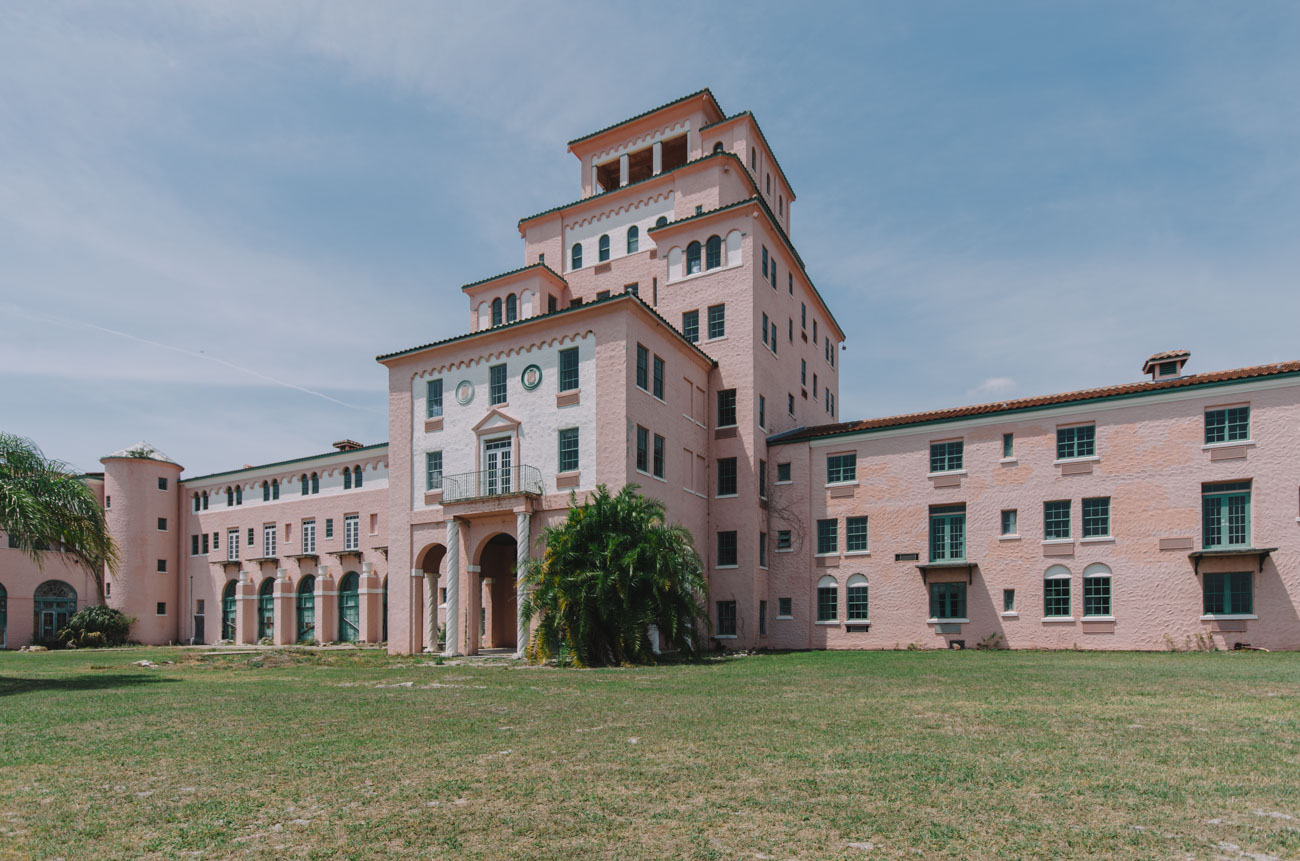 Author’s Note: The building is currently undergoing restoration. Trespassers are subject to fines and/or arrest.

The Florida land boom of the 1920s was the state’s first real estate bubble, attracting careless investors from all over the country, rapid growth in cities across the state, and the development of entirely new cities. One of the era’s most defining events occurred in November 1924 when the town of Sebring hosted an annual convention of governors from all over the country. About twenty governors, accompanied by Florida Governor Carl A. Hardee, stayed for two days at the Kenilworth Lodge and brought with them national publicity.

A group of investors aimed to monopolize on the state’s burgeoning tourism industry in the city which played host to such a historic event. Vincent Hall, a real estate developer from West Palm Beach, and his associate George Kline purchased the Nan-Ces-O-Wee Hotel and the Kenilworth Lodge. Financed by Biltmore interests, Vincent Hall along with Lewis F. Harder made plans for a major hotel and resort community development under the name, Lakewood Terrace.

Harder Hall, which the hotel eventually came to be known, was built in 1925 with construction being carried out by Schultze & Weaver who were also responsible for the construction of the Biltmore Hotel in Coral Gables. The Spanish Colonial Revival style structure was designed by architect William Manly King whose footprints can be found in every section of Florida.

The hotel featured six floors of guest rooms, an observation tower, and a series of patios and arcades through an abundance of tropical plants. The hotel opened in January 1927 with a six-course dinner to celebrate which attracted over 250 guests. Unfortunately, this was the hotel’s high point as it was only able to stay open for a few years during the Great Depression before Vincent Hall and his associates’ corporation folded, losing most of their properties.

In 1953, it was bought by Victor and David Jacobson and partners Larry Tennenbaum and Sam Levy. Victor commissioned acclaimed golf architect Dick Wilson to transform the resort’s golf course into a championship layout. Victor and Eva Jacobson operated Harder Hall Golf and Tennis Camp at the hotel and were the first and last co-ed, teenage golf and tennis camp in a resort ever. During this time, the resort was host to many famous guests such as Steve McQueen, Paul Newman, Ali MacGraw, and Mario Andretti.

Victor operated the hotel until 1982 when he sold it to Land Resources Corp., a North Miami-based time-share developer. The hotel officially closed in 1986 when the owners declared bankruptcy. Harder Hall was obtained by the Resolution Trust Corporation, a federal agency created in 1989 to sell off the assets from failed savings and loan companies. It wasn’t long after the property was seized by the federal agency that Harder Hall was added to the National Register of Historic Places in 1990. It was also around this time that the golf course and some adjoining land were sold off, reducing Harder Hall’s footprint from 300 acres to its current 13 acres.

Since its closure, there were two attempts at rehabbing the old building. Avi Limor of Delray Beach purchased the hotel in June 1994 for $517,300, most of which went into an escrow account to remove environmentally hazardous asbestos and lead fixtures. Limor invested $1.5 million into the building before dying in a private plane crash in November 1995.

The second attempt was in the 2000s when Miami Beach developer Marc Shenker purchased the hotel in December 2003. With the city’s assistance, he obtained a $5.2 million loan from the U.S. Department of Housing and Urban Development for restoration. Much work had been done to the building until October 2006 when Shenker’s development company, Joran Realty Corp., filed for bankruptcy. At the time of the filing, Joran Realty was facing six liens from different contractors totaling $471,868 in addition to three pending lawsuits. Company officials stated the contractors were not paid due to their low quality of work. The city foreclosed on the property and took the responsibility of paying back most of the loan.

Throughout these years, the Harder Hall Golf Course and Club continued operating as a separate entity from the Harder Hall hotel. It wasn’t until late 2021 that the golf course was sold. It was also around this time that rumors began circulating about new construction plans which called for the demolition of the historic hotel.

On September 2, 2022, it was announced that the Blackmon Family of St. Petersburg purchased Harder Hall to “create a marquee destination for the city of Sebring. Travelers will be able to enjoy the tranquility and beauty of the Highlands. But we also hope to create a community gathering place for locals to enjoy, with boating, pools, restaurants, and upscale cocktails in a historic setting.” The Blackmon Family was awarded a top honor by St. Petersburg Preservation for their restoration of a pre-1910 apartment building, and are currently in the process of renovating a 1924 Standard Oil filling station. They stated that “As lifelong admirers of historic buildings, we are aware of the challenges for the property moving forward. The plan from previous ownership groups regarding the planned, imminent demolition of the property is not currently being considered. Our primary goal is to restore the property as a luxury waterfront resort.”