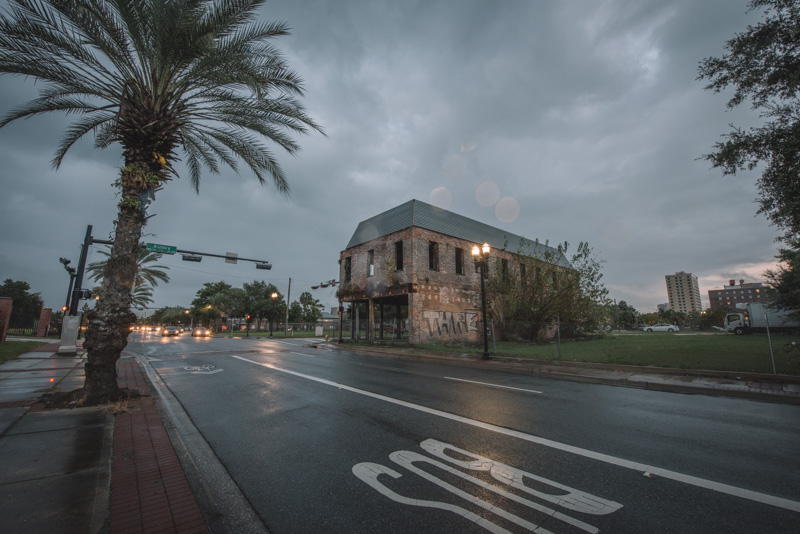 Genovar’s Hall was built by Sebastian Genovar in 1895 as a grocery store. It is located in the LaVilla neighborhood in Jacksonville and was constructed across the street from Jacksonville’s finest bordello, the Hotel de Dream. The building became the Wynn Hotel sometime in the 1920s. Louis Armstrong preferred staying here when in town because it was on the most active street in Jacksonville. The first floor of the building was occupied by the Lenape Tavern and Bar, one of the most popular jazz clubs in the city. Along with Louis Armstrong, other jazz greats such as Billie Holiday and Dizzie Gillespie played at the Lenape.

In the early 1940s, the Lenape became known as “the rail of hope,” where musicians would hang out, waiting for a job. One of the bar’s frequent visitors was Ray Robinson, a blind piano player who attended the Deaf and Blind School in St. Augustine before moving to live with a relative, just a block away from the Wynn Hotel. He developed his talents playing as a side-man for some well-known performers before becoming a star himself under the name, Ray Charles.

The LaVilla neighborhood fell into decline in the 1960s due to a massive loss of jobs in the railroad industry, and the construction of I-95 which divided the neighborhood. With the end of legal segregation, many residents left to pursue better job opportunities. Those that decided to stay struggled on a day-to-day basis. The crack cocaine epidemic of the 80s hit Jacksonville hard, resulting in an increase in crime and furthering the decline. According to the mayor at the time, the neighborhood was “nothing but crackhouses, prostitution, and crime.” Around this time is when the Wynn Hotel and Lenape Tavern closed down.

The final nail in the coffin for LaVilla came in the 90s. In a failed effort to redevelop the neighborhood, most of the buildings were demolished and Genovar’s Hall was just one of a few buildings left standing. It currently sits on a city-owned lot along with a trio of shotgun houses. An African-American fraternity planned to renovate the building and operate it as a museum or jazz-themed restaurant. After a decade of work and over $900,000, Genovar’s Hall was nothing but a brick shell. The City of Jacksonville currently owns the property with no plans on what to do with it.