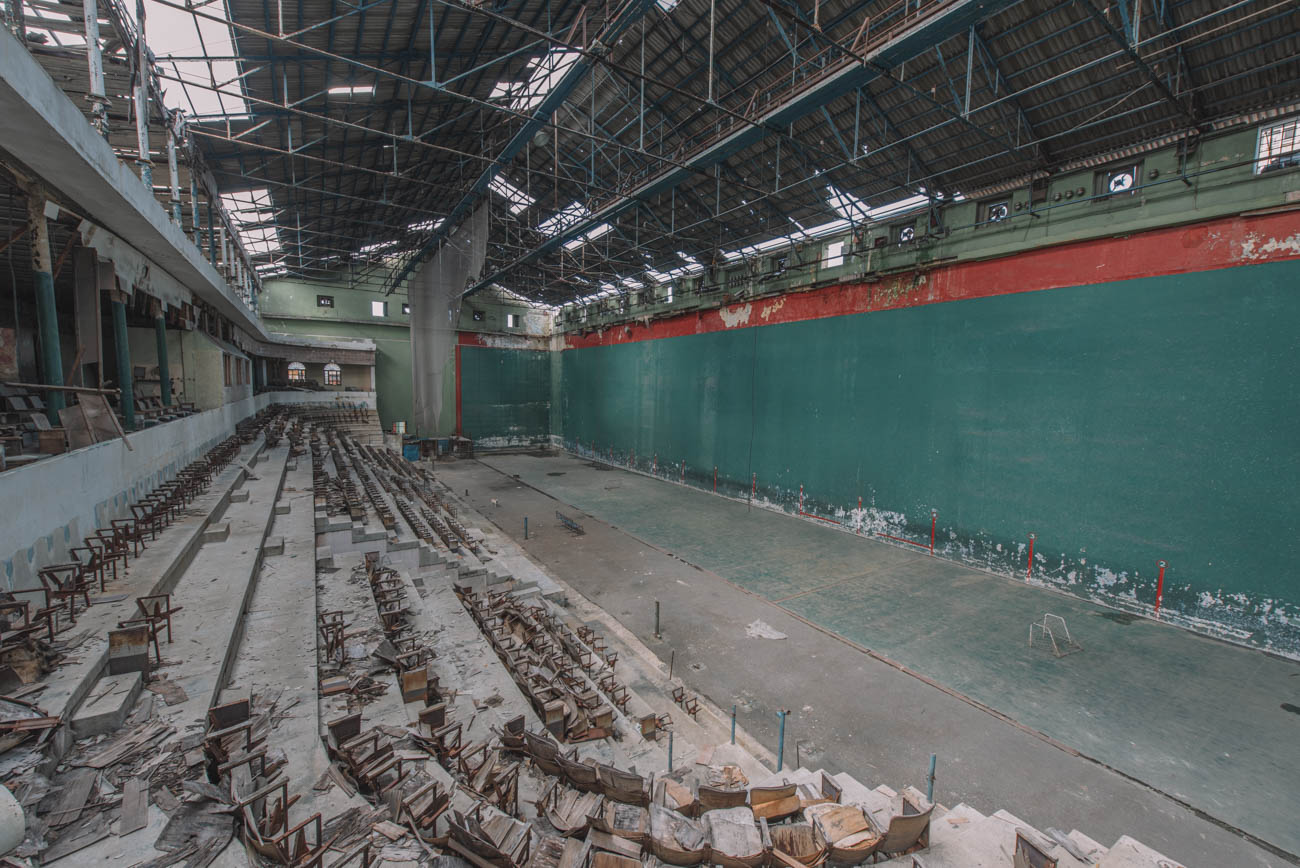 Jai alai was brought over to Cuba in 1898 by the Basques, the indigenous people of the Basque Country in Spain. In April 1898, the Mazzatini brothers made their first request to erect a building for Jai alai but due to the outbreak of the Spanish-American War, the process was delayed. The brothers returned in 1900, making three separate requests to the provisional military government. U.S. Army Colonel Edward Swartwout Dudley, the legal advisor of the military governor of Cuba, refused all three requests stating it was impossible to sign a ten-year contract that would cede land from the civil government for private use.

In a final bid, the brothers approached U.S. Army General Leonard Wood, Military Governor of Cuba, with their request which he approved. Colonel Dudley filed a complaint with Washington. The first jai alai fronton opened in the New World when the Frontón Jai Alai was inaugurated in Havana at the corner of Calles Concordia y Lucenan on May 7, 1901. Despite official complaints made by Colonel Dudley to Washington and the disapproval by certain Cuban Senate members, the Frontón Jai Alai was able to operate without a license with the support of General Wood. It wasn’t until 1904 that a ten-year contract was signed.

The first season’s batch of players was not high quality by any means, the second season saw much improvement. Rufino Osorio, the first administrator of the Frontón Jai Alai, traveled to the Basque Country and returned with a large number of professional and talented players. Promoted by the Basque Basilio Sarazqueta, Havana became the center of an increasingly lucrative sport, and with that the increasing number of bets. By 1914 though, the sport had stagnated and the ten-year contract had expired, returning the property to the Cuban government.

In 1918, the rules of jai alai underwent a few changes to make the sport more attractive to bettors. During this period, interest in the game waned with many players leaving the island in search of better opportunities. Many players failed to adapt to these changes and retired from the sport. Havana Jai Alai’s new administrator, Eliseo Argüelles, led the recovery of the sport renaming the fronton, Compañía Sport y Fomento del Turismo. Under his leadership, new talent emerged despite the rule changes, and once again crowds flocked to the fronton.

Throughout the island, the building became better known as “El Palacio de Los Gritos,” or “The Palace of Screams.” To pelota players, it was known as “El Matadero,” or “The Slaughterhouse,” because of how extreme it was to play there. On November 13, 1920, a second Jai Alai fronton opened on the island in the city of Cienfuegos, signifying the peak of the sport’s popularity.

Among the most famous visitors was Ernest Hemingway who not only enjoyed the sport but also the company of the Basques, which there were many in exile in Cuba during the 1940s following the Spanish Civil War. The love for the game went so far that during World War II, Hemingway concocted a scheme where he would masquerade as a fisherman and wait until a German U-boat came alongside to buy fresh fish and water. He planned on hiring Basque jai alai players to lob grenades down the open hatches of the unsuspecting U-boat. However, Hemingway only encountered one German U-boat during this time which sailed away on the surface when he approached.

On 30 October 1920, Babe Ruth went to Havana as a one-time member of the New York Giants and played against the Habana Reds at the Almendares, two clubs of the professional Cuban League founded in 1878 and discontinued in 1961 when Castro abolished professional baseball in the country. Ruth reportedly received a salary of $20,000 from participating in the ‘American Series,’ which involved American teams touring Cuba, having been inaugurated in 1891, and lasting until 1959. Cristóbal Torriente, recognized by many as the greatest baseball player to come out of Cuba, outhit Ruth in most categories and Almendares beat the Giants, five games to four.

Another fan of the Palace of Screams, Babe Ruth reportedly lost about $10,000 in gambling and received an injury attempting to play the “fastest sport in the world.” According to baseball historian Rick Feingold, Babe Ruth lost all the $20,000 he had earned gambling at casinos in Havana.

In 1959, the President of Cuba, Fulgencio Batista, was overthrown after a guerilla war against revolutionary groups led by Fidel Castro. Under new regulations established by the new Cuban government, any sporting or recreational events involving betting were banned. This, of course, included jai alai. Many players left the island and once again, the popularity of the sport on the island declined just as the popularity in the United States was almost at its peak.

Following the Cuban Revolution, the fronton was renamed the Vincente Ponce Carrasco Sports Center, named after a boxer who died during a battle in the revolution. The building played host to many sports and activities such as boxing, wrestling, karate, and even ballet. In 1991, it became the training ground for athletes preparing themselves for the upcoming Pan American Games being held in Havana. Jai alai is still played throughout the island, but it is nowhere near as popular as it once was.

Games can still be seen at the Cienfuegos Guernica Hall which at the time of this writing, is undergoing renovation work. It was initially planned to reopen by November 2021, with the purpose of hosting the Basque Pelota World Cup, but construction was postponed due to the COVID-19 pandemic. Unfortunately, the Frontón Jai Alai in Havana has seen much better days and while there are no current plans for its own renovations, it’s still used sporadically for karate classes or ballet lessons.

Photos of Havana. (January 25, 2021). The Jai Alai Pediment, the history of the Palace of Screams