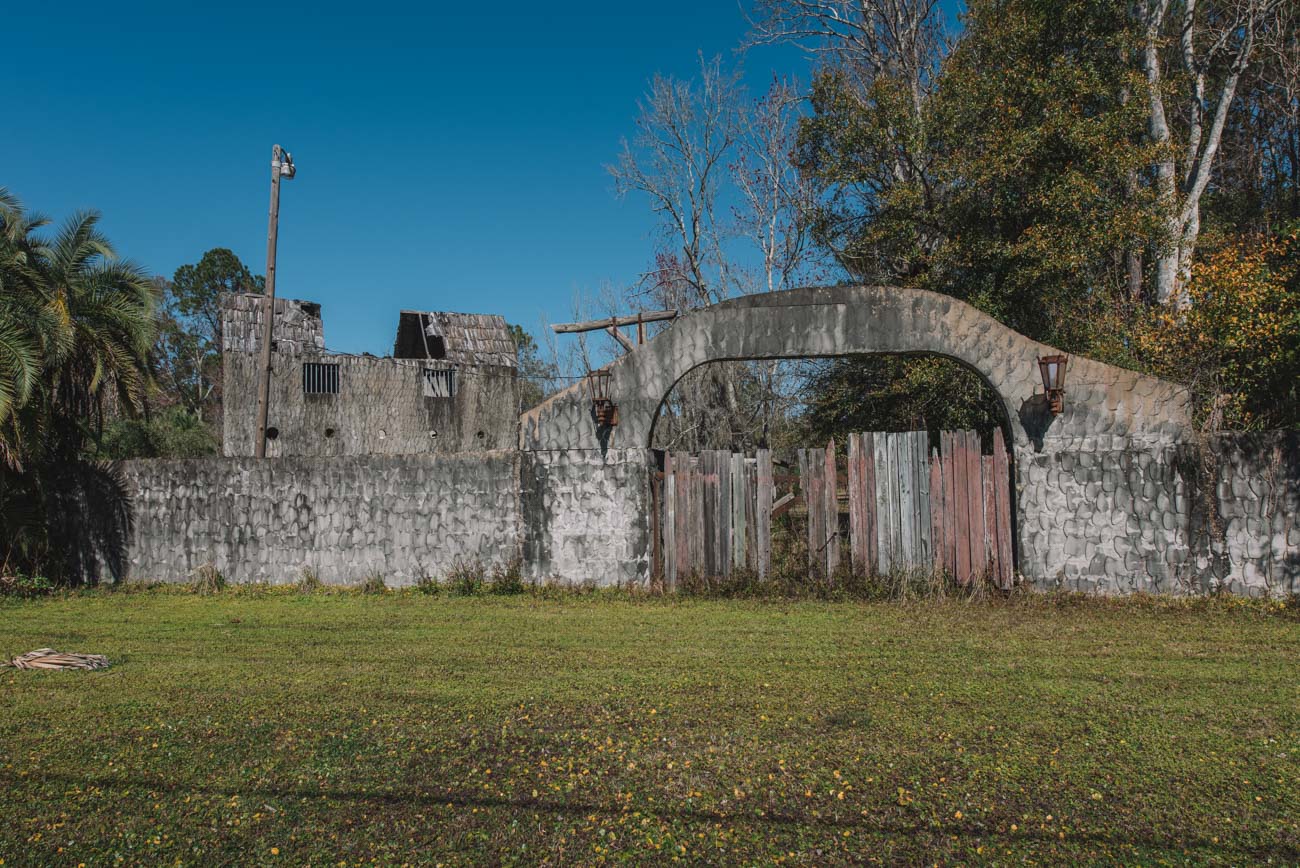 Located in Saint Augustine on State Road 16, Fort Bengali was first opened in the late-1950s by Leon Hamilton “Buddy” Hough as the “Oldest Jail”, forcing Henry “Slim” McDaniel to rename his tourist attraction, the well-preserved Victorian jailhouse on San Marco Avenue, “The Authentic Oldest Jail.” After the attraction’s name changed to Fort Bengali in the 70s, the name of the attraction in St. Augustine would revert back to the “Old Jail”.

On Hough’s property, there was also a one-sixth scale model train. The jail attraction had several cast-iron lanterns that once adorned the Bridge of Lions before the Florida Department of Transportation replaced it with aluminum ones, some of which had which still remain there to this day. On the grounds of the property were also what Hough claimed was an old schoolhouse and a 100-year-old house.

Hough also owned another museum at the time, the Tragedy in U.S. History Museum located in a residential house at 7 Williams Street in the historic district of St. Augustine, just across the street from the Old Jail. Hough came up with the idea for the museum following the assassination of President John F. Kennedy and saw an opportunity to make money off of the tragedy. Within three days of the assassination, he was in Dallas gathering up whatever memorabilia he could that was connected to the event.

The museum featured a frame-by-frame display of the Zapruder film, furniture from Lee Harvey Oswald’s Dallas apartment, a wax figure of Oswald peering out of a window labeled “Texas School Book Depository,” the ambulance that carted Oswald away after Jack Ruby shot him, and a limousine that John F. Kennedy once rode in. Also on display was a tattered leather jacket worn by James Dean, a copy of Elvis’ last will and testament, and the “death car” of Jayne Mansfield. Hough also claimed the 1934 Ford V8 on display was the “death car” of Bonne and Clyde, although it was likely to have been fake as the real one can be found at Whiskey Pete’s Hotel & Casino in Primm, Nevada.

Due to the lack of interest and lack of revenue Hough’s attractions were getting, the property on State Road 16, later known as Fort Bengali, was sold to Julius von Uhl sometime in 1978. Julius von Uhl was a lion trainer, circus performer, and magician born on March 11, 1938, in Budapest, Hungary, the only child of a European Baron. He fought against the Russians in the Hungarian Revolution in 1956, surrendered to Austrian police after Hungary’s loss, and immigrated to the United States.

Soon after coming to America Julius served in the US Army as a Dog Trainer and as a coach to the Modern US Olympic Pentathlon Team. Classically trained in horse riding as a young man, Julius developed his riding skills and became known as one of the best trainers in the world. He was the first breeder of white tigers in the United States which set the stage for becoming a circus legend. Known in the circus world as the “Baron”, he pursued his passion to work with animals and performed in venues such as the Shrine Circus, big and small tent shows, stadiums, fairs, carnivals, promotional appearances, and expositions

Julius opened Fort Bengali in 1978 as a roadside zoo best known for its Bengal tigers and lions. It was not long before the attraction was shut down due to complaints by wildlife authorities. In May 1979, officers of the Florida Game and Fresh Water Fish Commission raided the attraction and placed the animals in the protective custody of the state which included four Bengal tigers, five leopards, nine lions, a cougar, horses and ponies, monkeys, exotic birds, peacocks, raccoons, gerbils and other species of rodents.

According to the officers, fifty-five animals were neither fed nor given water for 10 days, and some of the tigers and lions could not even stand up when the commission took over custody of the animals. Authorities also reported that some of the bigger animals were cramped in small traveling circus cages. A few of these cages could still be found at Fort Bengali decades after its closure.

In 1982, the attraction operated as a flea market called Fort Enterprise and later as Wolf’s Den Indian Crafts. The owner at the time had various events there such as classic car shows and open-air concerts. It wasn’t long before that also closed down and the buildings fell into disrepair. Despite having only been opened for less than a couple of years, Fort Bengali was the name that has stuck with the public throughout the years. The “Oldest Jail”, the old schoolhouse, and the 100-year-old house built by Hough back in the 1950s are still there. Well, what’s left of them at least.

Gallery Below of Fort Bengali