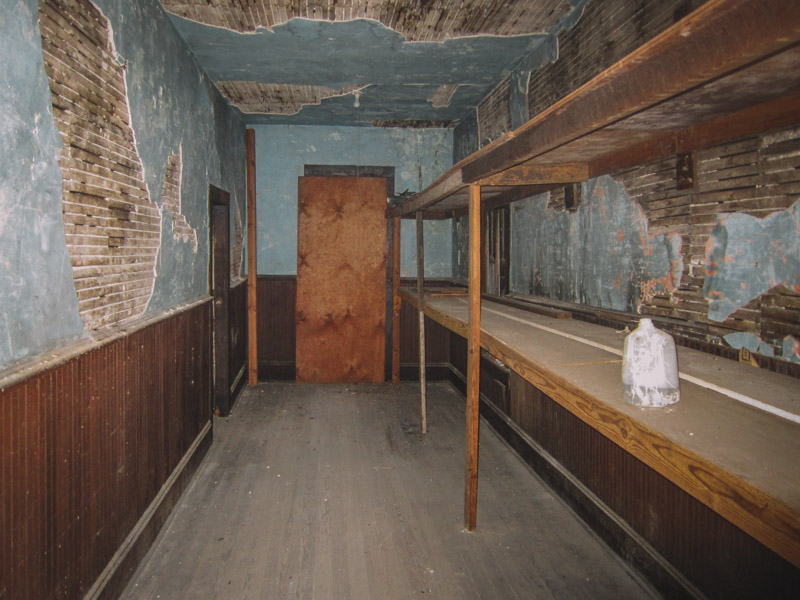 Terry DeLoach walks across the ruined ballroom in the wet August heat, as pigeons flutter frantically in a corner of the ceiling. The windows are boarded up and the ceiling slats are splintered and dangle patiently overhead.

There’s a mirror in this ballroom into which thousands of African American faces looked from the dance floor in the 1920s and 1940s. Some of those faces belonged to Ella Fitzgerald and Billie Holiday and Louis Armstrong and Cab Calloway and Ray Charles.

Lloyd DeLoach first opened DeLoach Furniture here almost a century ago. The furniture store was the central ground-floor business. To their left was a pool hall and to their right a mortician.

Upstairs was the Richmond Hotel.

Walking through the old hotel hallways, looking meditatively in the heat at the green paint on the door paneling, I feel humility and awe toward how much this building has lived.

DeLoach stands tall and broad-shouldered. In his early 60s, his pate is bald and his beard is trim and white. He speaks with a deep, calm, kind voice and seems both professorial and like someone who’s been surfing for 40 years.

“The sad irony is that LaVilla really started to implode after desegregation,” he says. “White flight” wasn’t just white flight. It was also the flight of the black middle and upper classes. “Then,” he says, “in the 60s, there were all the race riots downtown, and there was just this violence in the air around you.”

In fact, the 1960s began with the omen of Ax Handle Saturday, when whites in Confederate uniforms gathered downtown at Hemming Park with baseball bats and ax handles and assaulted scores of black people. They wanted to take back the middle of the city in response to black sit-ins and protests at downtown lunch counters.

The DeLoaches, a white family, who had lived and worked with black entrepreneurs in LaVilla and had met the black athletes and musicians who could stay in no other hotel in town but the Richmond, kept operating the furniture store through LaVilla’s decline into poverty and violence and hardcore drugs.

“The hotel went down in the 60s,” says Terry DeLoach, “because it seemed unconscionable then for it to even exist. It had always been an all-black hotel. Successful black people wouldn’t want to stay in an all-black hotel anymore. They wanted to be where black and white people both could stay.”

So the Richmond Hotel turned into a boarding house, where rooms rented nightly for a couple of dollars and nobody asked any questions.

We walk through a long-neglected hotel room after hotel room. I keep registering the room numbers in my head. 11. 19. 38. 41. I try to look through every window, though all of them are boarded up. I want to see through them to the people on the street in 1925. Maybe I’ll see Blind Blake or Jelly Roll Morton.

When we first came up the stairs from the locked and metal-grilled door down on Broad Street, I was ready to set down my bags and check-in.

Behind glass on the check-in counter sits a dust-covered lamp carved with angels and grapes and filigree, which a friend later says looks like it belongs in a brothel. The ceiling is caving in.

In the 1970s, LaVilla became a very dangerous place, and the density that had made it a densely massive star of black business and political networking and blues and jazz before segregation made it a labyrinthine magnetic mass of desperation that culminated in the crack cocaine epidemic of the 1980s.

No wonder so many African American people believed theories that the U.S. government created crack as a way to destroy Black communities in the decades following desegregation. The view from a place like LaVilla made such theories seem obvious. It was a kind of chemical warfare.

“And after the Richmond closed, the police wanted to use the top of this building to spy out on LaVilla,” DeLoach says. Though I can’t walk through the internal LaVilla political dynamics of the 1970s and ’80s, I hear him saying, beneath what he’s saying, that the DeLoaches were trying to be Switzerland in the war-charged atmosphere of the time.

The fire department, he said, did permit watches from the top of the nearby fire station and the message that “We know what you’re doing and if you don’t stop, we’ll burn this place down” had the desired effect.

Across from the former Richmond Hotel at Church and Broad stood a bar and drive-through pharmacy intentionally or ironically called “Perks. (apostrophe or not? It changes the definition.)

DeLoach says, “We fronted downtown. We were on the border between downtown and LaVilla. But by the 1980s, you could just disappear into LaVilla behind us. You could find any drug you wanted to find.”

He remembers being in the warehouse at the Church Street corner of the building, in what had once been a pool hall, and suddenly hearing an apocalypse outside the Richmond Hotel’s old walls.

“I remember how cars would line up all the way down Broad Street on Friday afternoons to drive through Perk’s / Perks.” What happened there was obvious and blatant. Anybody in the city who wanted to know about it could, but everybody was scared to do anything about it.

But Terry DeLoach remembers when the police came in with a SWAT team and circling helicopters and zeroed in on Perk’s.

“They’d told him if he didn’t stop his trade, they were gonna take his place down to the ground.” Now he’s standing on the sidewalk outside the Richmond / DeLoach, looking at the empty lot across the street. He says, “They followed through.”

There’s nothing on the street corner where Perk’s once stood now but the rusted frame of an old business sign. Who knows how long the sign’s been gone?

And it becomes apparent to me, as it has at certain previous moments, that LaVilla was a whole world. It had the gravity of a black hole. So much good happened here, and so much bad. So much life. So much.

And Terry walks down Broad Street to the former Progress Furniture Company warehouse at 318.

On the first floor is sheetrock and carpet and an old barbershop set up with a couple of these-days-collectible barber chairs in all the patience of their lost time.

But up the stairs, the old warehouse becomes bare. Brick walls. Wooden slats. Boarded windows. And then a very strange thing.

We step through a door, on the second floor, and step from the warehouse onto a front porch.

Front porch ceiling slats. Windows that looked into the front of a LaVilla house a century ago.

This old warehouse was built right around an even older perhaps Carpenter-Gothic Victorian LaVilla house. The second floor of the house is intact inside the warehouse. The warehouse is old, but the house within it is older.

The original beautiful wooden porch brackets of the older house within are well-preserved against the right angles of the interior brick warehouse walls.

And inside the old house, back from the porch, are rooms in which people lived stories I can never know but only try to imagine. The very idea of an older house preserved inside an old brick warehouse seems to model how history works, and how history is haunting. Always. That’s its definition.

Back in the Richmond Hotel, I stumble deep into the building’s interior. I’m carrying a dim flashlight, but accidentally kick something in the darkness at my feet. I look down and see the very old carcass of a pigeon.

Walking through hotel rooms and the corridors connecting them, I come to a different kind of window, one that opens out into an air shaft in the middle of the building. I can’t help but love the metaphorical value of such windows. I’ve looked into them in beautifully restored old hotels in San Diego and San Francisco, but I’ve never before looked through windows into the ventilation shaft of a building uninhabited for decades.

I love ventilation shafts in old buildings. I love the names for them. Air shafts. Most poetic of all: light wells.

They were brilliant ways to ventilate old buildings naturally, before air-conditioning. They help me think of these buildings as natural expressions of the earth, the way Frank Lloyd Wright thought of his architecture. Ventilation shafts rose up the interiors of tall buildings and offered a breeze and sunlight to the hallways and rooms.

For how many millions of cars have passed this building, and how few of their drivers, if any, have given a second’s thought to the tall empty central space that once brought sunlight and breath to a healthy, living building?

I think about when Eartha White, “Jacksonville’s Mother Teresa,” 96 years old in 1974, fell down the stairs at the West Ashley Street mission she named for her mother. She had so recently fallen and broken her hip. She died within the week.

And I feel sad that she died as LaVilla fell down its own staircase after she had helped so many people and seen so much death and life in LaVilla. I’m happy that her mission endures in 2013, that it’s now a multi-million-dollar non-profit charity. And I’m saddened Eartha died just a couple steps up from LaVilla’s hitting rock-bottom.

I want to look out the boarded-up windows of the Richmond Hotel and see a whole culture below me, masses of people, amongst them blues and folk and jazz musicians and hairdressers and bankers and bakers and preachers and poets, and, by name, maybe Ray Charles, maybe James Weldon Johnson, maybe Asa Philip Randolph, maybe Eartha White.