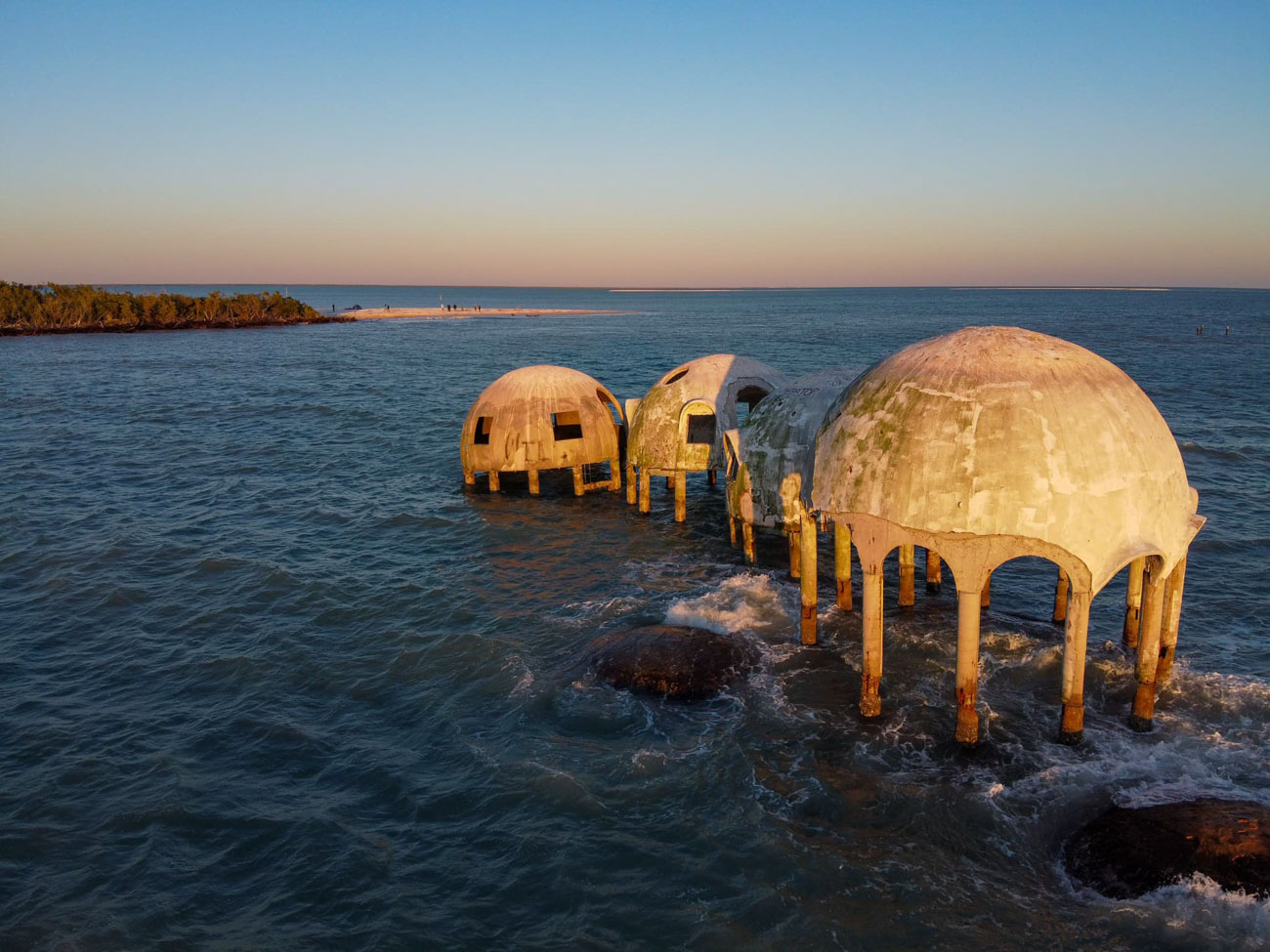 Built in 1981 on the southern tip of Marco Island on Cape Romano, the Dome House is an igloo-like concrete complex made up of white dome chambers, now decaying and slipping slowly into the ocean. Many know about its whereabouts, but its origins were up for debate; from alien to secret cults. In truth, it was built by a retired oil producer and inventor.

Bob Lee began work on the house in 1980 with the idea that it would be completely self-sufficient and eco-friendly. Purchasing a barge, he began by moving the necessary supplies to the island, including the metal dome forms, two concrete mixers, and freshwater to mix cement.

Florida’s turbulent weather was taken into account and the sturdy, rounded domes were able to sustain hurricane winds, having taken little damage from Hurricane Andrew years later. Having a second use, rainwater would hit the domes and would wash down into a gutter system that surrounded them, which lead into a cistern under the main dome. After running the water through filters, the water was then able to be used for things such as showers or dishwashing. Solar panels were installed providing free electricity to the house.

Their neighbors, the Innes family, had built another strange home simply known as “The Pyramid” just three years earlier. The home was built out of cedar wood, and just like the dome house, it was off the grid. Monte Innes had built a windmill as a partial power source and used the porches to catch water to drain into their cistern. The property also featured multiple aviaries that contained toucans, African greys, finches, and macaws, along with chickens, geese, turkeys, ducks, pheasants, peacocks, a black swan, skunks, and emus.

After the completion of the Cape Romano Dome House in 1982, Lee and his family sold it just two years later in 1984. When the owner got into financial troubles, the Lee family repossessed the home in 1987. By this time, the erosion of the beach had already started which threatened the few homes in the area. Monte Innes and his family sold the Pyramid in 1988 to a couple in Ohio. The couple bought it believing they could save from being up by the rising ocean, but before the couple was able to move in, the home was destroyed by a tornado. Being built on pilings, the Lee family was able to continue living in the Cape Romano Dome House until 1993.

It was purchased in 2005 by the John Tosto family with the hopes of renovating the home and making it functional again. Tosto planned on relocating the domes off state-owned lands and bringing them into compliance with county building codes. The domes will be moved by crane and set atop new concrete or steel pilings more than 50 feet from the high tide line and at least 25 feet away from wetlands behind the site. The permit application stated that construction materials would have been delivered by barge, and work was timed to avoid sea turtle and shorebird nesting seasons.

Deemed unsafe, the Collier County Code Enforcement Board issued an order in 2007 to demolish the structures. Having already invested $500,000 into the parcel, he refused and was fined $187,000 in 2009. Tosto spoke of having a vision and said destiny, not luck, would allow him to prevail, still believing he could save the home. At that time the house’s foundational pillars were permanently underwater. The Collier County Code Enforcement division later closed the case on the domes in 2018, and ownership was transferred to the state.

In 2013, Florida Weekly reporter Cynthia Mott wrote in an article that while snorkeling at the site, she discovered the ruins now served as a reef, with diverse marine life. She wrote: “I’ve snorkeled Grand Cayman, Mexico, and Fiji, yet have never witnessed a more diverse, crowded concentration of undersea life than what has taken up residence under the remnants of those domes. It was as if all the fish and rays living along that part of the Collier County coast decided to hang out in one location. To make the sight even more remarkable, swirling like iridescent tornado clouds around the gathering were millions of shimmering, silver baitfish.”

In 2015, a movement was started to move the domes deeper to a location where they could safely become an underwater reef as part of Florida’s history. But the movement never received funding. Two of the westernmost domes collapsed into the ocean after Hurricane Irma hit the area on September 10, 2017, leaving four standing. On September 28, 2022, Hurricane Ian destroyed the remaining domes. Only some of the pilings of the Cape Romano Dome House remain standing above water.