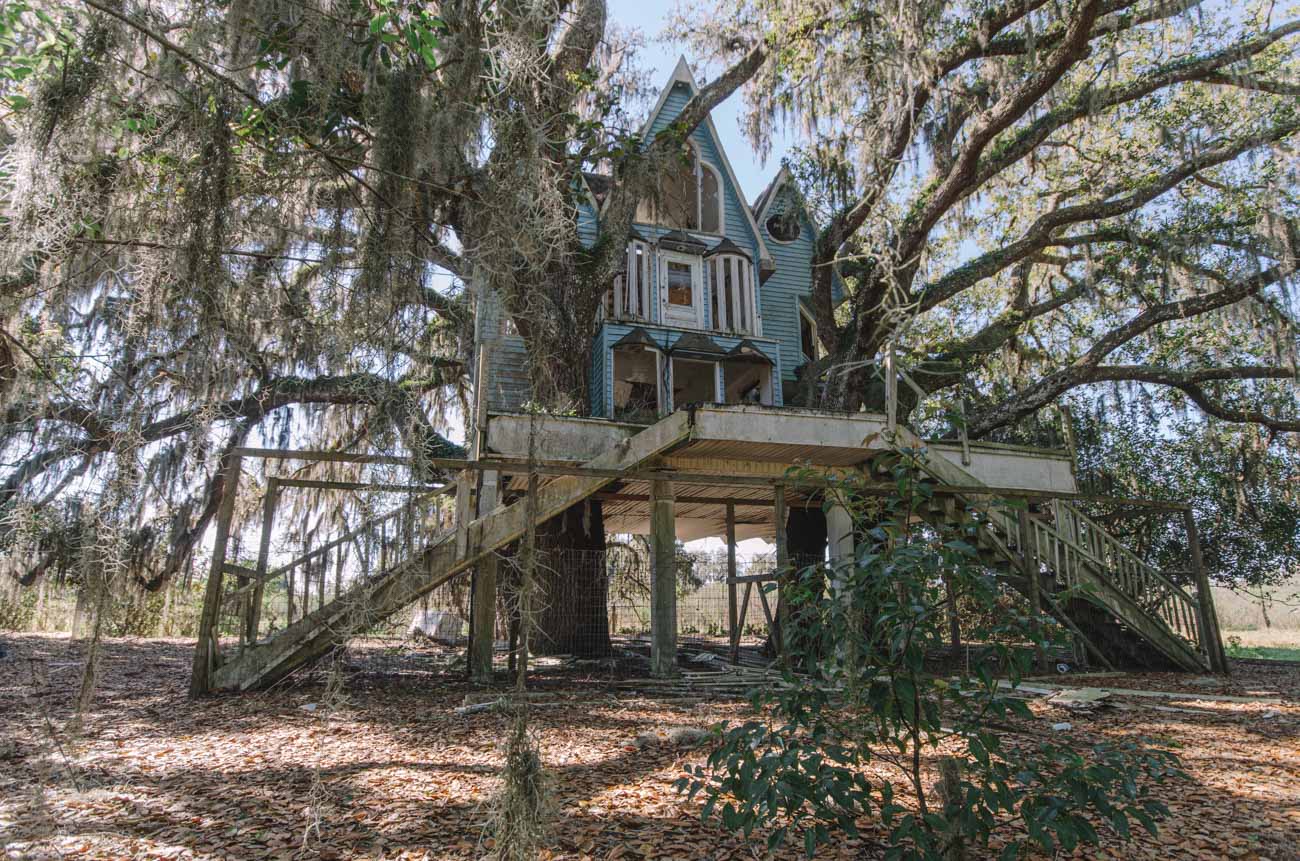 This grand Victorian treehouse was built by James Talmage “Tokey” Walker, a World War II veteran and cattle farmer. James developed a strong work ethic at an early age. He delivered newspapers and sorted dirty diapers at the Swan Laundry to save enough money to attend the University of Alabama, where he hoped to earn a law degree.

According to the January 17, 1934 edition of The Huntsville Times, he worked at The Great Atlantic & Pacific Tea Company, better known as A&P, which was the largest grocery store chain in the nation at the time. Tokey was an assistant manager at the A&P grocery store at Washington and Clinton Streets in Huntsville before being promoted to manager in 1934. The continued collapse of the banks during the Great Depression saw his savings and his educational aspirations lost and the direction of his life changed.

Inspired by his father’s cousins, pioneers of southern aviation, he took up flying. Tokey always claimed that the cousins actually flew a powered aircraft before the Wright Brothers, but didn’t tell anyone out of fear that people will think they were crazy.

He and his good friend, S. O. “Sunbeam” Holmes, purchased their first aircraft for $600. Acting as president of the Acme Club, a local service organization similar to the Rotary Club, Tokey oversaw the construction of a small airport in Huntsville funded by the Works Progress Administration.

During World War II, Tokey served as a civilian flight instructor at the University of Georgia Naval ROTC program in Athens. After the training assignment ended because the Navy had enough instructors, he and his wife later moved to Marietta, Georgia, where Tokey was a production test pilot for the B-29 bomber. Since he was the only person in the group of test pilots who could type, he would assign himself to fly with a barnstorming wing walker by the name of Aron Fabian “Duke” Krantz who would sleep in the co-pilot’s seat while Tokey flew the aircraft. He described the experience as “being the first person to fly an aircraft made by 30,000 who had never even seen an aircraft before.”

In October 1945, the Walkers moved to Clearwater at the invitation of Robert J. Word, who had been a flight instructor in Georgia and had taken a job running Clearwater Airpark. They went into business together along with Roy A. Workman and his son, Roy Jr. They formed the Clearwater Flying Company, renting and selling airplanes and giving flying lessons.

When the government discontinued underwriting the cost of teaching war veterans how to fly, the company was converted to make window screens out of aluminum, with the first being made in the corner of one of the airpark hangars. The business was renamed Metal Industries, now known as J. T. Walker Industries.

Tokey was involved with the Clearwater YMCA and the Lions Club and was a founding member of the Springtime City Kiwanis Club. He was chairman of the Morton Plant Hospital Charity Ball in 1989 and was awarded the Golden Flame Philanthropy Award in 2000 in recognition of a donation he made in memory of his late wife, Sarah, who passed away in 1996. James Walker died on May 9, 2003, at the age of 90. His name can be found on The National Air and Space Museum’s Wall of Honor in Washington D.C.

Back in the 60s, Tokey joined James M. Jackson in purchasing and farming an orange grove where much of the Highland Lakes subdivision now stands. Tokey later purchased a plot of land in Brooksville and began raising Charolais cattle, which he later converted into a commercial nursery several years later. In the mid-80s, he constructed this massive 3-story treehouse on the property for his grandchildren which included bedrooms, bathrooms, and even a kitchen.

After his death, his property in Brooksville was abandoned, though it was still owned by J. T. Walker Industries. The buildings on the property were vandalized throughout the years. In one instance, police arrived for training drills to find two men stealing copper wiring in 2007. A few years later, marijuana was found growing inside one of the greenhouses on the property. On October 11, 2015, it was discovered that the treehouse was torn down, most likely by the owners as it was a huge liability issue.

Rebecca Ward Beyer was graciously given to her a wedding reception at the Walker’s home and had many photographers taken comming down the stairs of the beautiful tree house and it was a Magical night that she and her husband and Andy and I will never forget. Everything was like a dream in wonderland and of course she was absolutely beautiful in her wedding dress coming down the stairs of the tree house. The tree house was beautiful and had everything a granddaughter’s could ever dream about in that house it was breathtaking to say the least. I was very sad to see that it dad needs destroyed, it and their weed-end home was a place to just relax and be in the presence of good friends. Mr. and Mrs. Walker always had a Special place in my heart and I loved them dearly and think of them often,

It was demolished sadly