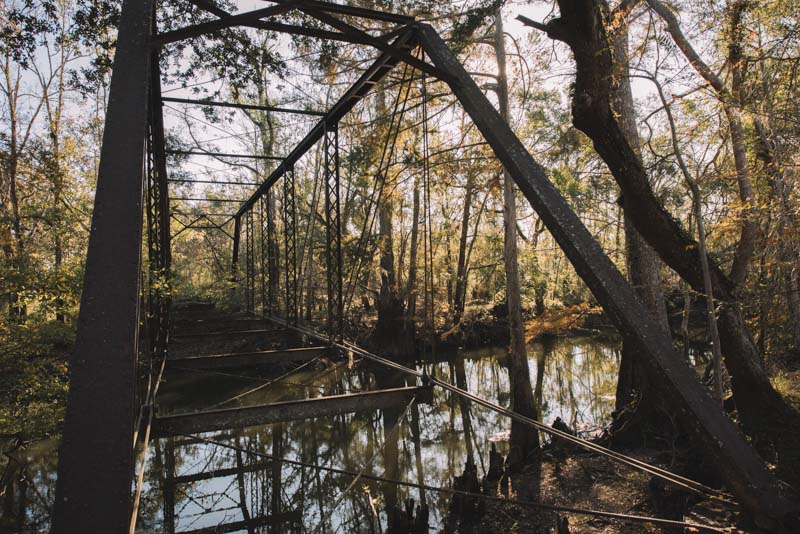 The site where the Bellamy Bridge now stands was purchased by Dr. Edward C. Bellamy in 1836 and moved there with his wife, Nancy Ann Croom Bellamy. His brother, Dr. Samuel Crowell Bellamy was married to his wife’s sister, Elizabeth Jane Croom Bellamy who would later become the centerpiece for the legend that this bridge is known for. Bellamy operated the site as the “Terre Bonne Plantation”. The area now covered in swamps and forests was once open fields where he farmed cotton, rice, and sugar. He owned the land until 1861 at the start of the American Civil War.

The first wooden bridge was constructed in 1851 by Dr. Horace Ely and Bird B. Hathaway. Confederate troops would guard the bridge from Union troops looking to cross, but it was never attacked. The bridge eventually succumbed to the elements and a replacement bridge was completed in 1872, but would only last two years before a major flood destroyed it. A third wooden bridge was constructed in 1874 and lasted until 1914 when it was replaced with the steel-frame bridge we have today. The steel-frame bridge was built by the Converse Bridge & Steel Company for $2,389. Sitting at 119 feet long, it is the oldest truss bridge in Florida and just in general, one of the oldest standing bridges in the state.

The bridge remained in use until 1963 when the nearby concrete bridge on CR-162 was built and has been closed to vehicular traffic since then. The wooden planks have decayed with time, eventually falling into the river. The Bellamy Bridge Heritage Trail was opened on November 1, 2012, allowing the public to visit the structure. It is located on Jacob Road about 7 miles off of US-231.

The Ghost of Elizabeth Bellamy

The Bellamy Bridge is mainly known for the ghost story that surrounds it. The story goes that Elizabeth Jane Croom and Dr. Samuel Crowell Bellamy fell in love and married on May 11, 1837. Elizabeth was dressed in a beautiful gown, and the wedding took place at the Bellamy plantation in the mansion’s rose garden. At the end of her wedding vows, Elizabeth said, “I will love you always and forever. Never will I leave you.”

During the reception, she went upstairs to take a nap. While sleeping, the sleeve of her dress had accidentally touched the flame of a nearby candle. Screaming and in a panic, she ran down the mansion staircase, her body fully engulfed in flames. Elizabeth did not recover from her burns and passed away a few days later. Her final words to Samuel were, “I will love you always and forever. Never will I leave you.”

Samuel never remarried and became accustomed to alcohol to ease his grief. He eventually committed suicide by slitting his throat with a razor. Tradition at the time was to bury suicide victims in unmarked graves and so he was buried on the grounds of the plantation. Elizabeth now wanders the swamps around the Bellamy Bridge searching for her lost husband.

The real story is much less dramatic. Elizabeth and Samuel married in North Carolina on July 15, 1834, three years before the ghost story’s rendition. Their son, Alexander, was born in 1835 and in 1837, all three came down with malaria. Samuel recovered, but Elizabeth would die on the same day as the legend, on May 11, 1837. Their son Alexander would follow seven days later at the age of 18 months. Years later, Samuel would commit suicide three days after Christmas, on December 28, 1853, by slitting his throat with a razor.