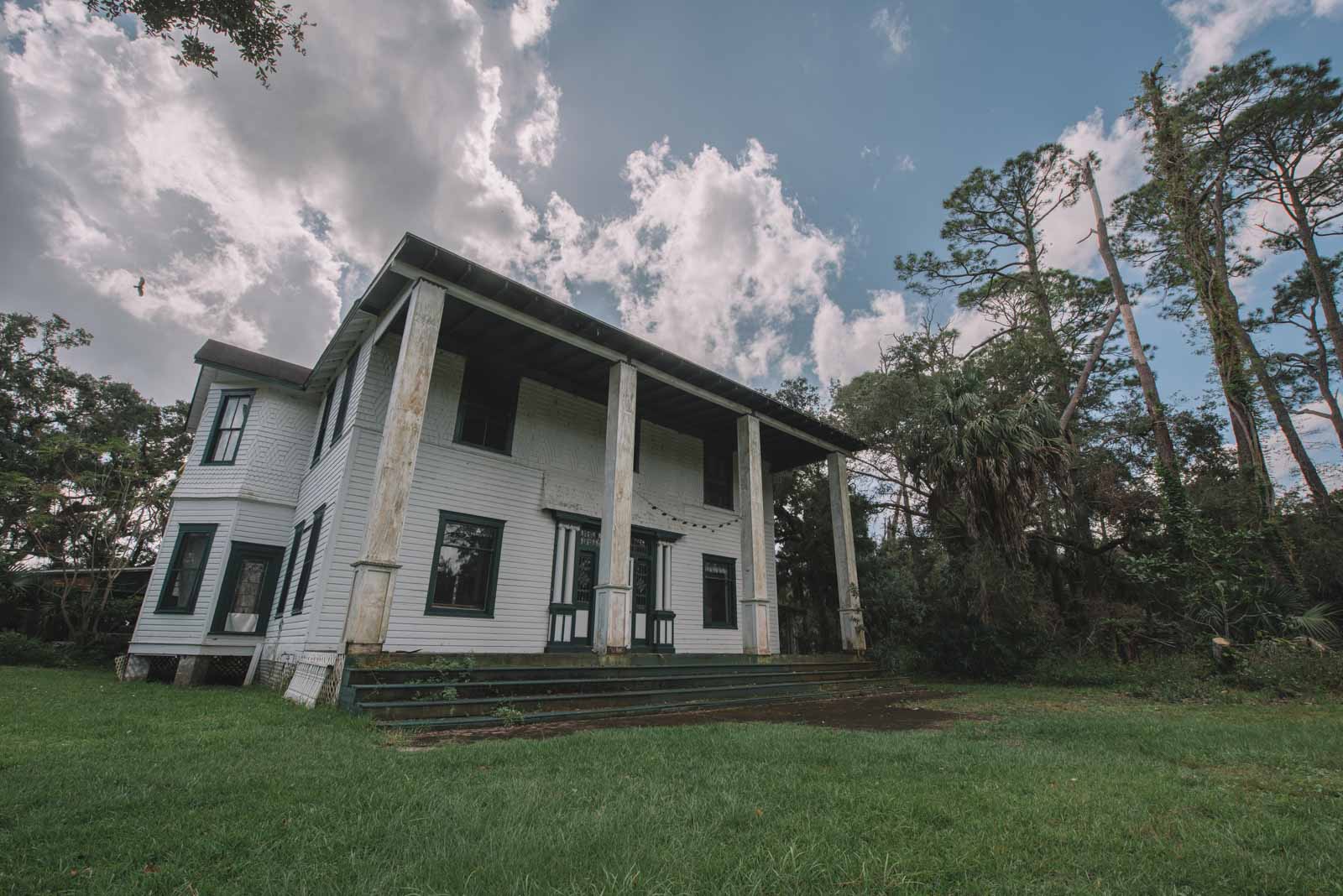 The Barefield/Holy Family/Schoelles House located in Apalachicola was built in 1907 by lumberman Charles Dobson for his mistress Minnie Barefield, a mixed-race woman who owned a brothel in town, on the corner of Monroe (Avenue K) and 7th Streets. The two-story 14-room mansion, constructed of heart pine and cypress, features high ceilings, eight fireplaces, carved mantels, imported tiles, stained glass windows, and sunny porches overlooking a pond and a secluded beach. The home is nearly identical to the Coombs House (1905) built just two years earlier and believed to have also been the work of one of the Marshall brothers.

John Marshall was a Portuguese immigrant who came to Baltimore, Maryland when he was just 10 years old. The immigration officer could not pronounce his Portuguese name and gave him the name John Marshall after Supreme Court’s fourth Justice. In 1862, John Marshall married Wilhelmina “Minnie” Lehnholf, a Prussian immigrant, and had seven sons and a daughter together. For unknown reasons, John left the family and later served as a janitor for a local church until his death in 1885. To help support their mother and younger siblings, the older boys worked in a traveling circus until settling down in Apalachicola. Many of the boys became builders and made a living building ships and homes as well as engaging in fishing, shrimping, and oystering.

John Henry Marshall owned a planing mill and lumberyard and operated as the John Marshall and Company. George Holmes Marshall was a prominent builder and is acknowledged for having built most of the houses in Apalachicola between 1890 and 1910 such as the aforementioned Coombs House. Many of his homes shared common features such as grand wrap-around verandas and impressive hand-carved staircases, all constructed of locally harvested cypress and heart pine. William Lehnholf Marshall built his own home in 1902 in the Queen Anne-style, located at 34 16th Street in Apalachicola. He moved to Tallahassee in 1904 where he served on the City Commission, first treasurer of the Tallahassee Chamber of Commerce, and mayor of Tallahassee in 1932.

Sisters of the Holy Family Convent

After Minnie Barefield’s death in 1917, her estate was divided up between Charles Dobson, her sister, and her two brothers. Starting in 1920, the old Barefield House was used as a convent school for the Sisters of the Holy Family. The Sisters of the Holy Family are a Catholic religious order of African-American nuns based in New Orleans, Louisiana. The order was founded in 1842 by Henriette DeLille in an effort to evangelize New Orleans slaves and free people of color. They were New Orleans’ first confraternity of women of color and were the second Black religious order in the United States.

The construction of a new school building and community center began in 1920 and took nine years to complete. Now known as the Holy Family Senior Center, it was built next to where the Barefield House once stood. The Edmundite priests were in charge of the school from 1959 until its closure in 1968. The convent and school were vacant for the most part and were used as storage buildings for the diocese.

The Schoelles family purchased the Barefield House in 1974 and moved it to its present location on 4.4 wooded acres overlooking St Vincent Sound eleven miles west of town. According to Kendall Schoelles, a third-generation Apalachicola oysterman, his parents had the house cut in half and transported via flatbed trucks. The Schoelles family occupied the home until 2018 when the house sustained damages during Hurricane Michael. The house was put up for sale for $880,000 and according to the Zillow listing, it requires hurricane remediation. It was purchased on April 21, 2022, for $800,000.

This house has recently been for sale. It was damaged during Hurricane Michael and is in need of mold eradication. It is no longer listed on Zillow and I don’t see that it has sold either. I’m not sure if it sold or has been taken off the market. Oh, if I had the money! Your photos are wonderful as they are before the latest hurricane damage,

It’s currently under contract meaning the owner has accepted an offer but the sale hasn’t been finalized yet.