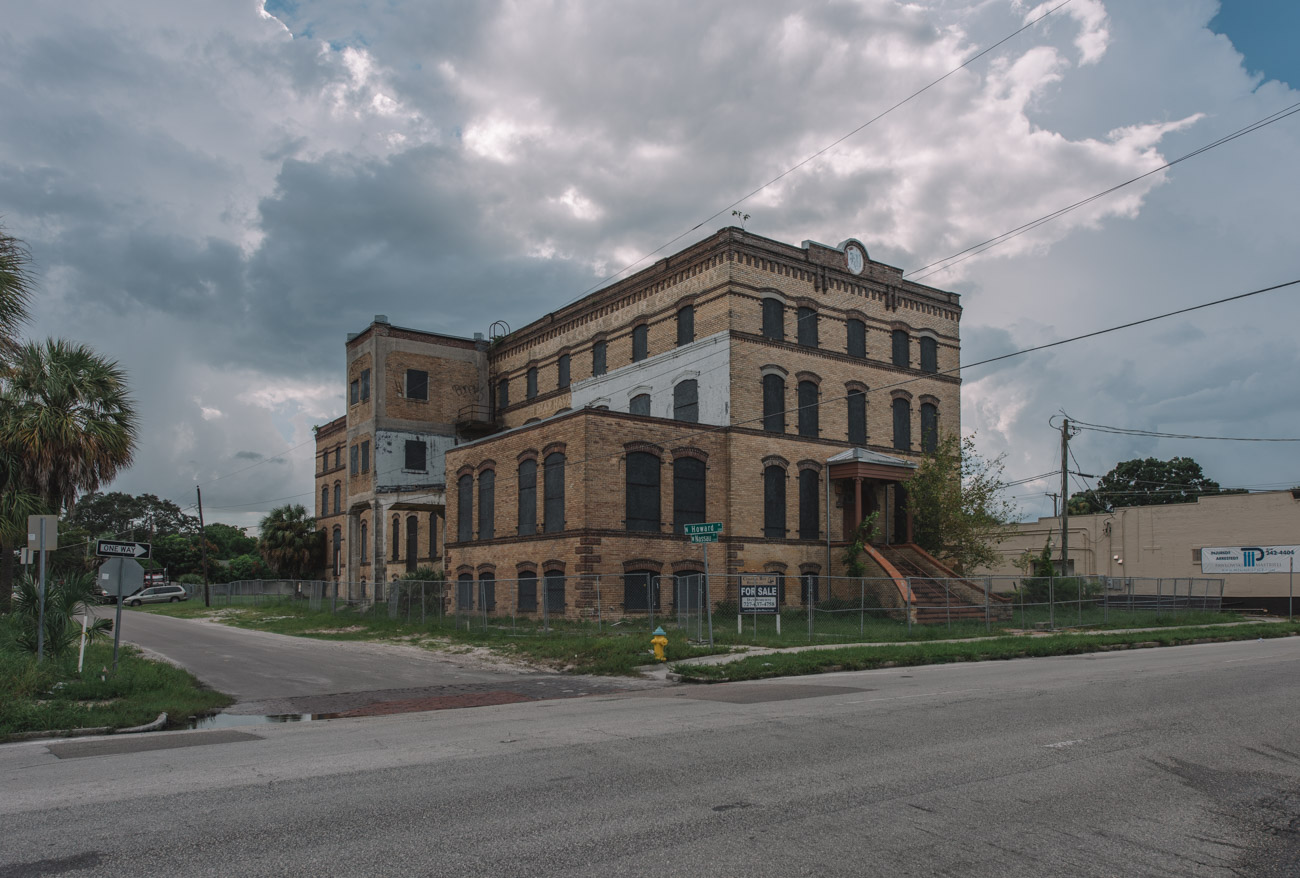 The story of West Tampa’s former Balbin Brothers Cigar Factory dates back to 1904 when the three-story brick Romanesque Revival style building was built for the Samuel I. Davis & Company. The building was occupied by the Samuel I. Davis & Co. until October 2, 1910, when it was severely damaged by fire due to arson during a workers strike. A year later, the property was acquired by brothers Gabriel, Benigno, and Miguel Balbin. Immigrants from Asturias, Spain, the Balbins emigrated to Cuba and arrived in New York between 1874-1877, and received their citizenship in the late-1880s. Employing hundreds, the Balbin Brothers Company produced hand-rolled cigars under various labels including Elisardo, El Matrimonio, La Flor de Rousseau, Ella De Vine, Balbin, El Sidelo, and Flor de Balbin. The building is sometimes referred to as the Elisardo Factory Building. Before moving into this building, Balbin Bros. operated out of a factory building on the corner of Albany Avenue and W St. John Street.

The Tampa-Cuba Cigar Company was incorporated September 28, 1891, by businessmen H. B. Guilford, Ernest Berger, and pioneer Tampa cigar manufacturer Emilio Pons who is recognized for establishing the first cigar factory of local origin in the area in 1887. On January 6, 1916, the Tampa-Cuba Cigar Company acquired Balbin Bros. Co. and its subsidiary the Diaz-Havana Cigar Co. which resulted in Tampa-Cuba Cigar Co. becoming the largest cigar manufacturer in West Tampa. Under their ownership, the factory building was expanded and a water tower was added. In December 1923, Balbin Bros. Co. and Diaz-Havana Cigar Co. were dissolved and Tampa-Cuba Cigar Co. continued operations at this site until it closed down on May 16, 1934. By this time, the Great Depression, competition from mechanized factories, and the increasing popularity of cheaper cigarettes had become too much to bear.

Following Tampa-Cuba’s closure, the DeSoto Brewing Company acquired the building and converted it into a brewery to take advantage of Prohibition being repealed in 1933. Opening in late 1934, DeSoto brewed four brands, De Soto Beer, Colonial Ale, Gasparilla Beer, and German Type Lager. Unfortunately, De Soto’s business never took off, closing in 1936. For the next 38 years, the building was utilized by several businesses including the Empire Mercantile Company and Fremac’s clothing manufacturing company. From the late 1970s to 2005, enterprises operating there included EverWear Products, Inc., Royal Kitches, Inc., and Daystar International. Of more than 200 factories in operation during Tampa’s early 20th-century cigar manufacturing heyday, only 24 of these unique industrial buildings remain standing. Current plans call for redeveloping the factory into a Best Western Sadie boutique hotel. The redevelopment will involve gutting the interior entirely, but restoring the exterior. The developers believe the project will revitalize the neighborhood, believing restaurants and other businesses are sure to be constructed nearby. The building remains vacant as of March 2022.

I was very surprised that this building is still standing & hopefully it can be repurposed to the benefit of the neighborhood as mentioned in the above article.
I was incorrectly searching for the “El Sidelo” Cigar Company and found out thru your information that El Sidelo was just one of the many cigar brand names produced by the Balbin Brothers Cigar Company.
Apparently my paternal grandfather worked for Balbin Brothers Cigar Company sometime between the years 1910 & 1913, so this is why I’m here visiting your website.
Thanks again for making this history available to the rest of us – it’s very much appreciated!

There have been a few plans floated on how the building should be repurposed, most of which involved turning it into apartments or a boutique hotel. I’m hoping the building is restored as well and hopefully, much of the original features are retained. I’m really glad you enjoy the work I’ve since put out. Really means a lot to me.