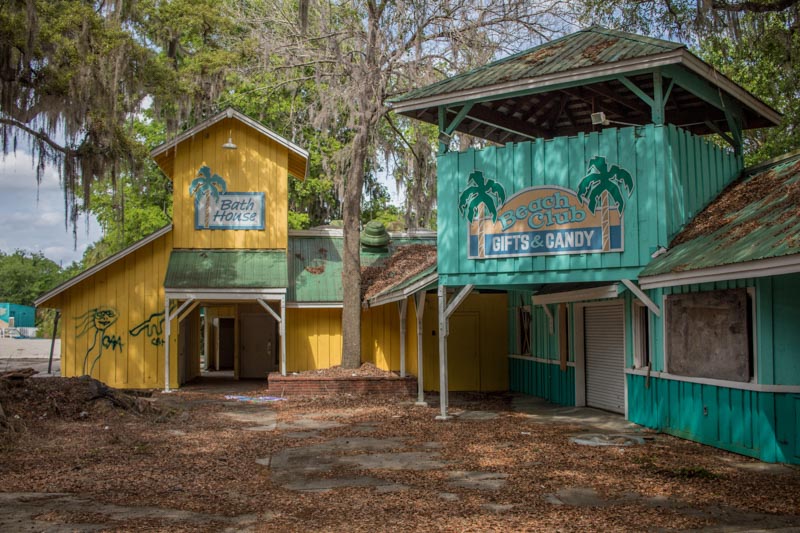 Wild Waters was a water park located in Silver Springs, Florida, and was the sister park of Silver Springs Nature Theme Park, the site of Florida’s oldest commercial tourist attraction. Its main feature is the world-famous glass-bottom boat tours on the river, which have operated in one form or another since they were first introduced in 1878.

It was first used for a filming location in 1916 for the silent movie, The Seven Swans. While many small films followed, it wasn’t until the 1930s when six Tarzan films were shot at Silver Springs, making it a popular location for films due to its exotic surroundings. Some notable films shot there were The Creature from the Black Lagoon, Smokey and the Bandit 3, and Distant Drums.

In 1971, Silver Springs was designated a National Natural Landmark. It wasn’t until 1993 when the first thorough scientific studies of the springs were conducted and wildlife rehabilitation had begun. The State of Florida purchased all the underlying land, but the attractions continued operating by private companies.

ABC Television owned Silver Springs National Theme Park between 1962 and 1984. Wild Waters was built by ABC in 1978 and was one of the South’s first water parks, and also was among the nation’s first water parks to use fiberglass slides. Wild Waters was not a large park by modern standards, but it attracted people looking for a more traditional water park experience and a more relaxed atmosphere than its larger competitors.

Palace Entertainment began operating both Silver Springs National Theme Park and Wild Waters in 2002. The park began facing difficulties due to increased development in the region which caused an increase in pollution, decreased water flow, and a decreased fish population. In January 2013, the Florida Cabinet announced it would take over the facility after the 2013 season. In October 2013, the State of Florida took over operations of the Silver Springs Nature Theme Park and combined the property with the adjacent Silver River State Park to form Silver Springs State Park.

State officials vowed to return Silver Springs to a more user-friendly nature park with the focus being the breathtaking natural resources. Because of this, the state struggled with what to do with Wild Waters and after some deliberations, it was announced in August 2016 that Wild Waters would shut down the following month. The water park was planned to be razed and the property was to be repurposed as a second entrance into Silver Springs State Park. Since its closure, there has been a vocal minority who have started websites and petitions, expressing their dislike of the closure of Wild Waters and the changes made to Silver Springs. Demolition of the park began in December 2018.