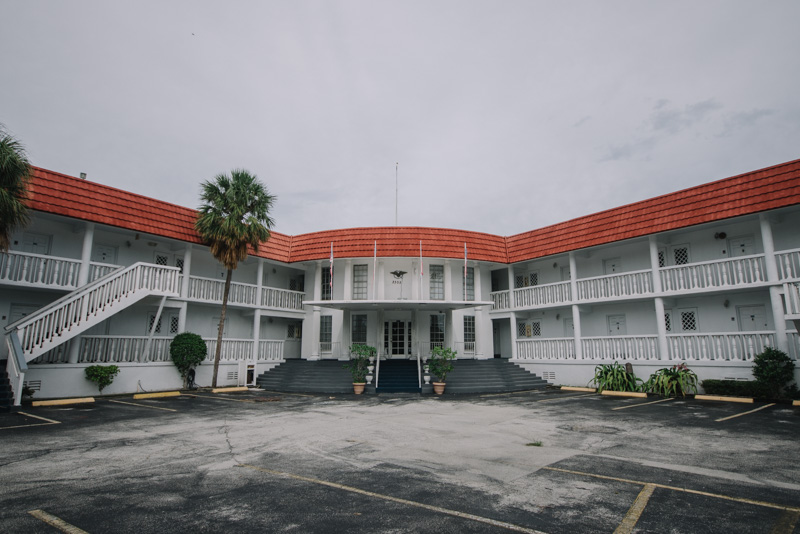 The White House Inn, also known as White House Inn on the Bay, was a motel located in North Miami, built in 1969 and closed around 2014. Information about its operating years is scarce but according to reviews during its final years, the motel offered hourly rates and with rife with prostitution and drug users. Here are a few select reviews:

I checked in….went to the room…saw multiple roaches….saw hairs in my bed….the lamp shade fell off…..the toilet lid fell off and there was dirt all over the doors and just an overall disgusting place.  I did exactly as they said to get my money back and now I’m bring told I’m out of luck. Expect to see my review on many other sites.  I’m going to do all I can to make this place go away. – Kevin D., 6/21/2012

Worked there, love some of the employees. But the owners, service and business sucks. So does the cleanliness, even after the house keepers clean, too many germs. Too many nasty people staying there. Mostly pimps and hoes. – Hailey, 1/9/2014

In December 2014, the property was purchased by the president of Brickell Motors, Mario Murgado, for $7.8 million. Murgado proposed tearing the motel down and replacing it with a seven-story Ocean Cadillac dealership with a self-contained parking garage, a top-floor showroom, and a restaurant on the ground level. There was a large outcry by local residents against the development as it was feared that it would bring large amounts of traffic to the area. Another reason is that the north side of the street is intended to act as a low-rise buffer between the gated, single-family Keystone Point neighborhood to the north and the higher density developments to the south.

The City Council denied the construction of the development and not long after, a new plan was submitted involving the construction of Biscayne Harbour, an 11-story, 52-unit condo tower. Again, Keystone Point residents were not happy with some suggesting that Murgado wasn’t intending to build anything at all, but instead was planning on reselling the property for an estimated $17 million after it was upzoned, thereby opening the doors for an even more ambitious high-rise project. Despite their protests, the City Council approved the construction with police being called to calm the upset crowd at the meeting. There is currently no date for when the White House Inn is set to be demolished.