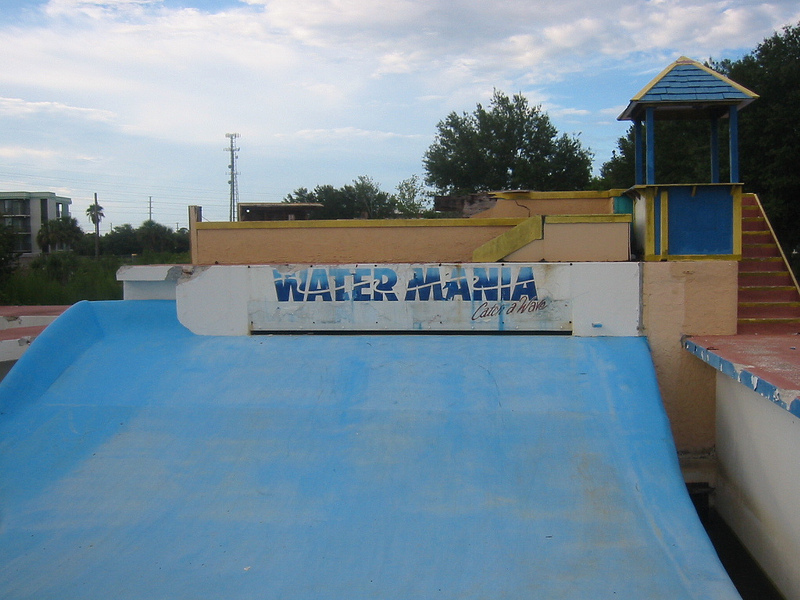 The park was Kissimmee’s first water park and featured rides like the “Twin Tornadoes”, “Cruisin’ Creek”, and “The Anaconda” which debuted in the 1990 season. At the time, they boasted the largest wave pool in the region and also had a surfing experience called “Wipe Out”, where people used bodyboards to ride a continuous perfect wave. Its popularity peaked in the mid-90s when the park was welcoming over 500,000 people a year.

On August 25, 2005, it was announced that Water Mania would be closing. The press release announcing the closing reads:

Dear Friends and Family of Water Mania,
After 20 seasons of working together with you to provide a safe and fun filled day for the entire Family, Water Mania will open and close its doors for the last time on Labor Day, Sept 5th, 2005.

Since that first season in the summer of 1986, we have strived to keep an atmosphere that was conducive to having safe family fun. We have enjoyed hiring and training your sons and daughters, which for many, was their first job. We appreciate the many partnerships we have had in the local community and indeed the nation and world as a whole. Over the next several days, we hope to see many of our friends one last time. After the 5th of September and through the end of October 2005, holders of season passes may redeem them for admission at Wet ‘n Wild, located in Orlando on International Drive. All guest services, complimentary and splash back passes are valid only at Water Mania through September 5, 2005.

Our sincerest “thank you” to the friends and family of Water Mania,
The Larson Family and Water Mania Team

Water Mania closed on September 5, 2005. One of its competitors, Wet ‘n Wild, hosted a job fair that same day for the roughly 75 employees who lost their jobs. Wet ‘n Wild also honored Water Mania customers still holding day tickets or seasonal passes. Many believe it closed due to competition from other attractions such as SeaWorld, Universal Studios, and Walt Disney parks, but according to owners Gary and Randy Larson, they were approached by a buyer and decided to sell the property as it was an offer they couldn’t refuse. Along with Water Mania, they also sold the property next door which included the Country Hearth Hotel and a go-kart track.

The park was demolished and eventually replaced with a Golden Corral and Pirate’s Island Mini-Golf. Even though Water Mania is gone, their website wasn’t taken down which you can visit here.