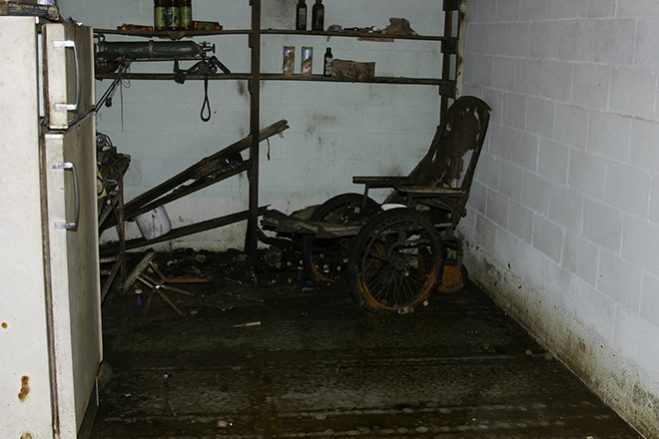 Alas, Babylon was written in 1959 by Pat Frank and was one of the first apocalyptic novels of the nuclear age. It deals with the effects of a nuclear war on a small fictional town called Fort Repose, Florida, which was based on the actual city of Mount Dora, Florida. In 1961, the Cold War was in full effect and the threat of nuclear war between the Soviet Union and the United States was looming on the horizon. With Cuba being so close to Florida, the fear here was especially high; schoolchildren practiced ducking underneath their desks, air raid sirens could be heard for miles, and families prepared by building bomb shelters in hopes that they will be safe during a Soviet attack. Taking a cue from Alas, Babylon, some of the wealthiest residents of Mount Dora got together to construct the largest privately-owned bomb shelter in the nation; one that could house 25 families for at least 6 months. It was dubbed the “Mount Dora Catacombs”.

Dr. James Basil Hall, the Lake County health director at the time was the mastermind behind the Catacombs. Rather than calling it a fallout shelter or a bomb shelter, Dr. Hall preferred to call it a “group survival shelter”. His idea was simple: “Psychologically, we’re social animals, and there is safety in numbers. I believe that group will survive with fewer problems than will the single family attempting to go it alone. If the father were separated from his family, his wife and children wouldn’t have to fend for themselves unaided; they’d be with other families. And a group, by pooling its funds, can have a much more comfortable shelter – at far less cost to the individual family. I feel that five to fifteen families make an ideal survival group. We happen to have twenty-five families in our organization, but that’s because the idea of a survival shelter proved so popular in our area.” -Dr. James Basil Hall, “Medical Economics; December 17, 1962

The group included the city’s mayor, county superintendent of schools, a local bank president, two doctors, two nurses, a dentist, a pharmacist, two former teachers, and one minister. Each family paid about $2,000, which at the time was a large sum of money. At the cost of $60,000, the 5,000 square-foot shelter was constructed in secret. It took six months, a crew of 15 workers, and heavy equipment to construct it, and it was all done in secret. It was something the group didn’t want the general public to know about because they didn’t have room for everybody. The landowner told those that came around asking that he was merely building a croquet court. A grass croquet court was built on top of the shelter to keep to facade going.

The entrance was disguised as a small utility shed and inside was a 2,000-pound, blast-proof, steel door. Beyond the blast door was a stairwell that lead to a 4-inch wooden door that opened into the shelter itself. This door opened into a sound-proof room with a diesel engine with an auxiliary system for added safety to provide power, along with a 6,000-gallon fuel tank and 4,000-gallon water tank. The shelter also had a 220-foot-deep well and a shallow well, both equipped with hand pumps in case the power ever failed. They had assumed there would be deaths within the families and they couldn’t go outside to bury them, so the burial crypts were located on the wall opposite of the generator and water well. An air-conditioning system was installed along with a bicycle-powered blower which again, was yet another fallback plan in case the shelter ever lost power. There were also two dehumidifiers, each capable of removing eight gallons of water every 24 hours.

A bit further down was the decontamination area, which would have been used by anyone coming in that may have been contaminated by radioactive fallout. After this was another wooden door that led into the shelter’s recreation area and meeting room with several hallways that branched out. The complex had more than 30 rooms including 25 private living quarters for each family. There were two communal bathrooms each with three showers, commodes, and washbasins. A lift pump forced waste material up to the ground-level sewage disposal system.

In one corner of the lobby was the kitchen which only had a sink and a four-range electric burner. The shelter’s food supply, which included canned peaches, peas, sweet corn, soups, and potted meat was kept in a nearby storeroom. Basic medical supplies, vaccines, and antibiotics were stored in the two-bed medical clinic. Those in the group who required special medications such as those cardiac illnesses, diabetics, and asthmatics, had to provide their own required medicine. The clinic was also equipped for major operations. An isolation room was also built to keep illnesses or infections from spreading throughout the shelter.

To keep uninvited guests from making their way inside, the shelter also maintained an arsenal of weapons ranging from .22-caliber rifles to .357 magnums and included over 10,000 rounds of ammunition. A five-man guard called the “Security Committee” was established, who were in charge of keeping order amongst the residents. Among their responsibilities were distributing food and supplies from the food supply, tagging and locking up any firearms brought into the shelter, and stopping all disputes between any of the residents. The “Medical Committee”, led by Dr. Hall, was in charge of the health and welfare of the residents. All minor illnesses were to be treated at a Sick Call at 8 am every day, while serious illnesses were treated immediately. Residents were only allowed to smoke in the recreation area. An “Agricultural Committee” was in charge of assigning jobs to members of the group for the purpose of growing crops after leaving the shelter. Hundreds of cans of seeds were stored within a large closet known as the “seed room” located at one end of the long hallways.

Every family stocked each of their rooms with everything they thought they would need like clothing, books, and children’s toys. Each family paid $200 a year for the upkeep of the shelter, which included the cost of electricity to keep the dehumidifiers and air-conditioning system running along with periodic restocking of the canned food. The shelter was used only once when the group stayed one night as part of a drill. If it was to be used again in the case of a nuclear disaster, its residents would have stayed underground for as long as six months, before digging their way out through a pre-constructed tunnel filled with gravel.

Thankfully, there was no need to use it and by the mid-1970s, many of the families had either died or moved away, leaving the shelter to fall into ruin. The dehumidifiers have since been shut off, allowing mold and mildew to grow. Since then, only a few individuals have been down into it, let alone know of its whereabouts. In 2006, writer Bill Siervert and photographer Richard Stayton received permission from the owners at the time to tour the underground complex for a Pulse Magazine article titled “Gimme Shelter”. It tells the history of the shelter and their experience being down there. The article has been reprinted by the Mount Dora Buzz on their website.

Pat Frank, who wrote Alas, Babylon and was a Mount Dora resident, found out about the shelter from Dr. Hall and wrote about it in his 1962 book How to Survive the H-Bomb and Why. He called it the country’s most elaborate, privately financed group shelter. But he refused to make a reservation for himself in the shelter and explained why in his book. We wrote:

“I can imagine being visited by my sister and brother-in-law and their children at the precise moment that the balloon goes up. What do I say? Do I say, ‘Sorry, Dolly old girl, we can’t take you into our shelter. You and Leonard and the kids will have to stay here and be irradiated. But meanwhile, feel free to use anything you find around the house.’ No, I don’t think I can say that.“

A spot was to be saved for the contractor who built the shelter but he also refused the invitation because with his children away at school, it was unlikely he could gather his family in time to use it. He said, “If the bombs dropped like people thought, well, all my friends would be gone. I didn’t see the point.”