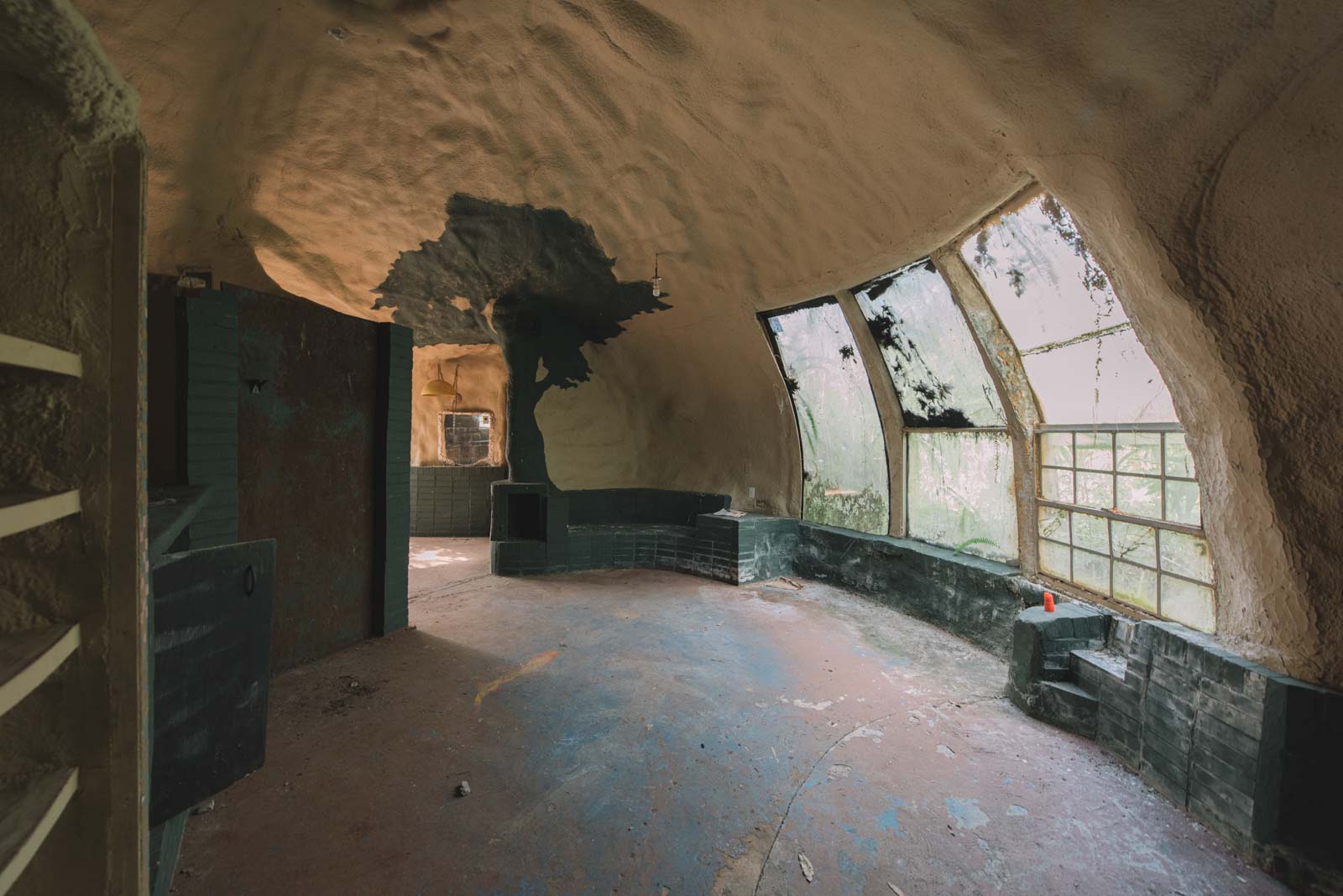 Nestled amongst the pine trees, bamboo, and fern-filled forest near Santa Fe College in Gainesville, the dome house was envisioned, designed, and constructed by Mark Cohen in 1972, a landscape architecture student from the University of Florida. With pre-stressed welded rebar as the frame, polyurethane foam was sprayed on the exterior, and cement paint was sprayed in the interior of the home. The home was made up of two domes connected by an S-shaped hallway. The smaller dome contained 3 bedrooms and a bathroom, while the large dome contained another bedroom and bathroom, the kitchen, and a living room with a sunken fireplace.

The dome was known by various names including the “Flintstones House”, Hobbit House”, Igloo House”, but to the people who lived there, it became known as the “Foam Dome”.  In Mark’s own words: “The Foam Dome was coated with concrete on the exterior and a cement paint on the interior. The area around the sunken fireplace was brick. I had to prove to the county building inspectors that it wouldn’t burn in order to get a certificate of occupancy. But, for the most part, the county inspectors were very accommodating. They would send a different person out each time for inspections so everyone in the department had a chance to see it. I sprayed the foam on a few other dome frames of much smaller size for other owners but the technique just didn’t take hold. I also sprayed store interiors and waterproofed tanks and roofs. Anything to stay in business until I could mass-produce more foam domes. Eventually, I shut down the company, sold the foam equipment, and got a job. At the time of the construction of this dome home, there was lots of talk about new types of construction and economical energy-efficient homes. Does that remind us of the talk that’s happening today? However, the timing wasn’t right. Financing was hard to get for construction and for homeowners. Polyurethane had a bad name for its flammability and toxic gas when burning.”

Mark Cohen lived in the home for seven years before selling it off to some friends of his. During those seven years, there were countless stories of parties filled with debauchery, which isn’t surprising considering Gainesville is a college town. He would later pass away on December 26, 2015.

The property would change hands multiple times throughout the years, even laying vacant for a number of those years, with many different people who would occupy the home. One previous resident recounted their time there when they were living there with a few other kids who also went to the University of Florida. They told of constant partying at the home, always full of pot smoke, kegs of beer, and psychedelic mushrooms which grew plentifully right down the road. The parties usually had upwards of 100 people, along with 30 more on top of the roof of the dome. There was even a 16-year-old kid who lived in the closet, often with his girlfriends, and paid just $100 a month for rent. On one notable occasion, one kid was blowing fireballs out of his mouth, 20 feet into the air from the roof.

Along with the parties, at one point some of the tenants thought it would be a good idea to grow marijuana inside of the home. Two of the bedrooms were filled, one-foot-deep, wall to wall, with dirt, and after rigging the power meter, 8,000-watt lighting was also installed in the rooms. One evening after returning from class, a business card was found on the front door from a local detective saying “CALL ME ASAP”, prompting them to shut down the grow operation. Despite that, the home was raided a few months later by police, accusing them of having a grow operation on the premises. After some searching, they only found small amounts of marijuana and dropped the case.

Eventually, the parties ended as the owner defaulted on their mortgage, returning the home to the bank. It stood vacant for a number of years before it was purchased in July 2017. Rather than tearing it down, the new owner has renovated the home and is currently renting it out to a couple who live there with their four sons and their dog.