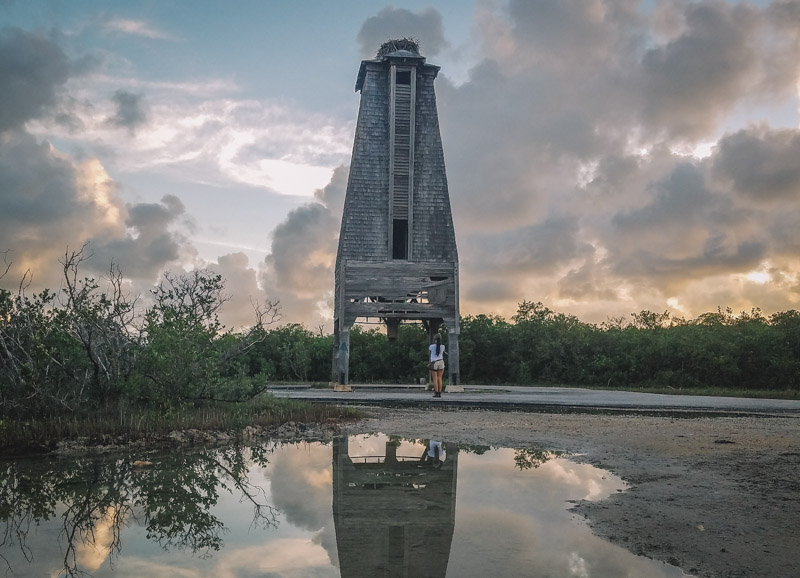 The Sugarloaf Key Bat Tower, also known as the Perky Bat Tower, was built in 1929 by Richter Clyde Perky, a real estate developer from Denver who owned a fishing lodge and resort in Lower Sugarloaf Key.

In the early 19th century, it was reported that mosquito swarms in South Florida were “so dense in some areas that it was impossible to breathe without inhaling mouthfuls of mosquitoes.” The construction manager Perky had hired to oversee the construction of the fishing resort complained that “in the late afternoon, you would just have to rake the bugs off your arm” and that “they’d form a black print on your hand if you put it against a screen and suck all the blood right out of it.”

Perky came across a book titled Bats, Mosquitoes and Dollars by Dr. Charles Campbell, a doctor and early pioneer on bat studies from San Antonio, Texas. He experimented with attracting bats to artificial roosts as he believed that bats were a natural predator to mosquitoes. Campbell thought the architecture for a roost was a simple matter, once saying: “Can bats like bees be colonized and made to multiply where we want them?” he wondered. “This would be no feat at all!…Don’t they just live in any old ramshackle building? They would be only too glad to have a little home such as we provide for our songbirds…”

After many expensive failures, followed up by months of observing bat colonies in the caves of West Texas, he came up with his design for a Malaria-Eradicating Guano Producing Bat Roost. He built what he claimed was the world’s first intentional artificial bat roost at Mitchell’s Lake near San Antonio in 1911. Before its construction, 89% of the people around the lake were infected with malaria according to Dr. Campbell. In 1914, he examined these people and found not a single case of malaria and that the bats had rid the area of mosquitoes.

Richter Perky purchased these plans from Campbell in 1929 and constructed the tower on Sugarloaf Key at the cost of $10,000. The tower features a louvered bat entrance facing the prevailing wind, a central guano removal chute, and dense, honeycombed walls of cypress wood bat corrugation that function as roosting shelves. Despite applying pheromone-doused guano as bait to attract bats, not a single bat moved in. It wasn’t until 1996 when the first scientifically confirmed colony of bats was found in the Keys.

On May 13, 1982, it was added to the National Register of Historic Places and is considered the founding monument for the Florida Keys Mosquito Control District. The Sugarloaf Key Bat Tower was one of fourteen Campbell bat roosts built throughout the world and today but was destroyed in September 2017 when Hurricane Irma passed over the Keys.