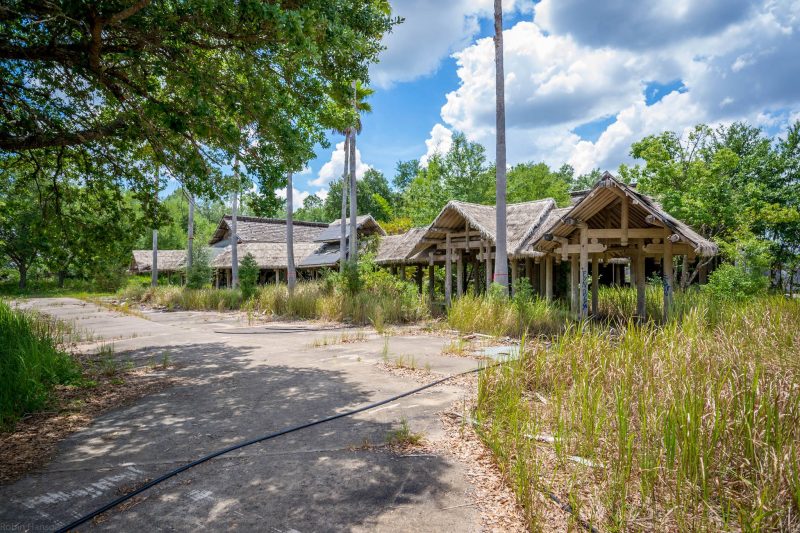 The idea for Splendid China here in Florida was that of Josephine Chen, a Taiwanese-American school teacher and real estate developer. The thought was the park would be a great means for cultural exchange between China and the United States. Josephine traveled to China in 1988 and was welcomed by officials of the China Travel Services(CTS), a government agency. They gave her a tour of a prototype park, “Splendid China Miniature Scenic Spot” located in Shenzhen. The park had huge success, having over 3.5 million people visit in the first year and the CTS recouping it’s $100 million investment that same year.

It took two years to negotiate an agreement with the CTS. Under the agreement, Chen would provide the land and management services for the park, while CTS supplied the building materials, architects, and the personnel. Expert masons were brought in, laying down more than six million miniature bricks to build the miniature Great Wall. They molded 30-foot high replicas of giant Buddhas and set up an entire lumber mill to manufacture the delicate beams and planks needed to build hundreds of miniature towns, palaces, and temples.

One of the ironies of the park was a large number of Buddhist shrines, given that China has attempted to uproot religion by destroying temples and mosques, as well as the killing of monks and nuns. In the replica of the Longmen Grottoes, two of the Buddhist figures were reproduced with smashed faces. Chen disagreed with the decision since they were smashed during the Cultural Revolution, but CTS wanted to reproduce them as they are to avoid any political discussions.

Though the most controversial exhibit in the park was the inclusion of the Potala Palace. The palace was the seat of the Tibetan government and home of the Dalai Lama since 1642, up until 1959 when the Dalai Lama was exiled by the Chinese government, fleeing to India with 80,000 of his people. After his exile, Chairman Mao ordered his army to attack the centers of Tibetan Buddhism, as the Dalai Lama had become a symbol for Tibetan resistance. International human-rights groups estimate that anywhere from 20 to 30 percent of Tibet’s entire population was massacred.

According to accounts, the Chinese government forced monks and nuns to copulate in the streets of Lhasa. The number of functioning monasteries and temples in Tibet had dropped from 2,611 in 1957 to just 70 in 1960, in the same time that the number of monks and nuns dropped from 114,100 to 18,104, an action which would be described as mass murder. By 1976, only eight monasteries and nunneries remained in Tibet.

In December 1993, one week before the park was to open to the public, CTS bought out Chen and assuming full control. She saw it was clear they intended the park was to serve as a vehicle for Communist propaganda. In late-December 1993, the park opened and was immediately met by protesters, including Tibetan Buddhist monks wearing traditional saffron robes and carrying signs denouncing China’s illegal occupation of their homeland. The protesters claimed they were against the inclusion of the Potala Palace as well as other exhibits, including the Id Kah Mosque, the Tomb of Apak Hoja, the Mausoleum of Genghis Khan, and the Mongolian Yurt.

In the first three years since it’s opening, the park took many blows, hurting them financially and their public appearance. The protests attracted media attention, which helped keep the attendance low, as well as around 42 Chinese performers, requested political asylum in the U.S., claiming they were being held against their will.

Sonny Yang was put in charge in March 1996 as well as management was being replaced in what the Orlando Sentinel described as a ‘big management shakeup’. Even though management has changed, Splendid China was turning out to be a commercial failure. In 1999, it was reported that the park was losing an estimated $9 million a year. In May 2000, rumors had surfaced that the park was to be sold off and closed soon.

On December 31, 2003, Splendid China closed due to the low attendance during the post-Sept. 11th depression. According to their official website:
“Florida Splendid China Theme Park will discontinue operations in Central Florida as of the close of business on December 31, 2003. This determination was reached primarily due to the continued downturn in the tourism economy, as evidenced by the closing of other tourism-dependent businesses in the area. Despite several years of attempting to achieve successful theme park operations, the company has concluded that it could not longer continue to incur significant losses. To our friends and supporters, we express extreme regret that this action has become necessary.”

A year later, around December 2004, many of the park’s assets were auctioned off including many of the miniature figurines and statues. The property was sold to redevelopment firm in May 2005. Since then, the park has sat in a state of disrepair as vandals have made it their playground. Though there is a security presence on site, Osceola County deputy sheriffs have responded to nearly 100 times for calls about trespassers, suspicious persons and juveniles jumping over the fences.

In April 2009, deputies arrested six teens on felony charges after they were accused of setting the theater and amphitheater on fire. A nearby resident claims you can see smoke coming from park every once in a while, with Sheriff’s records claiming that there have been other acts of arson on the site. The park has since been demolished to make way for Jimmy Buffet’s Margaritaville Resort.