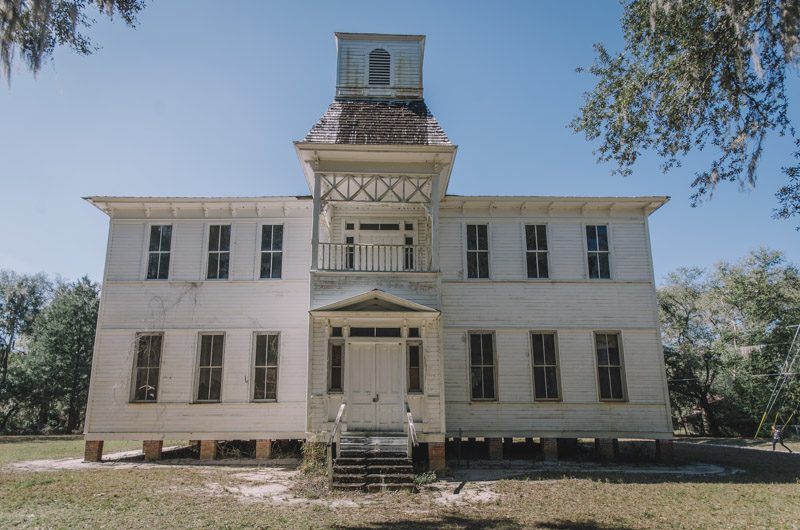 The community of Rochelle was originally known as Perry Junction, named after Governor Madison Starke Perry who owned land and a plantation there. Later, it became known as Gruelle, named after a railroad surveyor. During this time, Rochelle became a hub for the Florida Southern Railway whose narrow gauge line was built from Palatka and Gainesville to Ocala via Rochelle. Rochelle was later on the mainline of the Plant Railway System being the daily stopover between Jacksonville and St. Petersburg. According to Mike Woodfin of Ghosttowns.com, during the mid-1880s, Rochelle had about 175 residents and a hotel, two churches, two schools, plus a cotton and grist mill. By 1888, 24 trains passed through daily.

The town’s demise came in 1895 during the Great Freeze which decimated much of Florida’s citrus crops. This caused many settlers and most tourists to abandon the area and settle further south. Not much remains of the once-thriving community.

One of the original schoolhouses is still standing. First built-in 1885 as the Martha Perry Institute, the building stands on land which was donated in 1889 by Sallie Perry, daughter of Governor Perry, to A.F, Zetrouer and T.F. Kennedy, the school trustees, for a “white public and private school lot.” The Rochelle school conducted classes until 1935 when it closed down.

The building today is privately owned and kept in extremely good shape. The school bell and many of the original desks are stored inside the building. On April 2, 1973, it was added to the U.S. National Register of Historic Places.