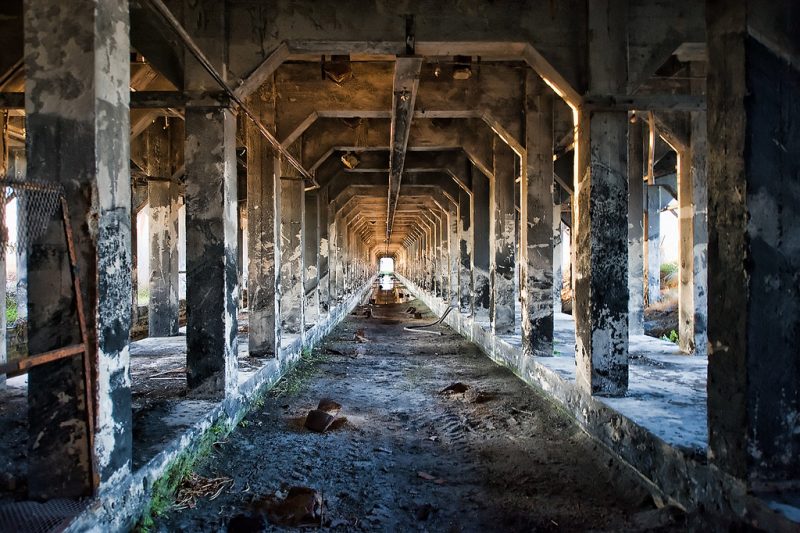 Located on Prairie Mine Road near Mulberry, the massive structure made of 28,000 tons of steel-reinforced concrete was built in 1909 by the Prairie Pebble Phosphate Company. Called a dry bin, it was used to store phosphate until the newly mined rock dried out and was among the few vestiges of phosphate’s rise here in Florida.

Florida phosphate mining dates back to deposits first found in Alachua County, near Hawthorne, in 1883. In the early years, phosphate ore was collected out of the Peace River’s sandbars using picks and shovels and then barged downriver to nearby drying works. Operated by a crew of three men, steam shovels appeared in the early twentieth century and were able to do the work equivalent to 80 men working by hand. As mining techniques changed and technology improved, the phosphate mining industry spread.

In Florida, the majority of phosphate deposits are found in Central Florida in an area known as Bone Valley. Florida currently contains the largest known phosphate deposits in the United States, providing 75% of the nation’s entire phosphate supply and 25% of the world’s supply.

The 40,000-square-foot Prairie building was shut down in 1964 when newer technology rendered it obsolete. Since it’s closure, scrappers and scavengers stripped most of the steel from the structure, leaving it unstable and particularly dangerous. Trash, discarded mattresses, and even a fishing boat were scattered throughout what was left of the facility.

JVS Contracting acquired the property in May 2014. With plans to establish a concrete-crushing business on the site, the old Prairie dry bin was demolished in September 2014.