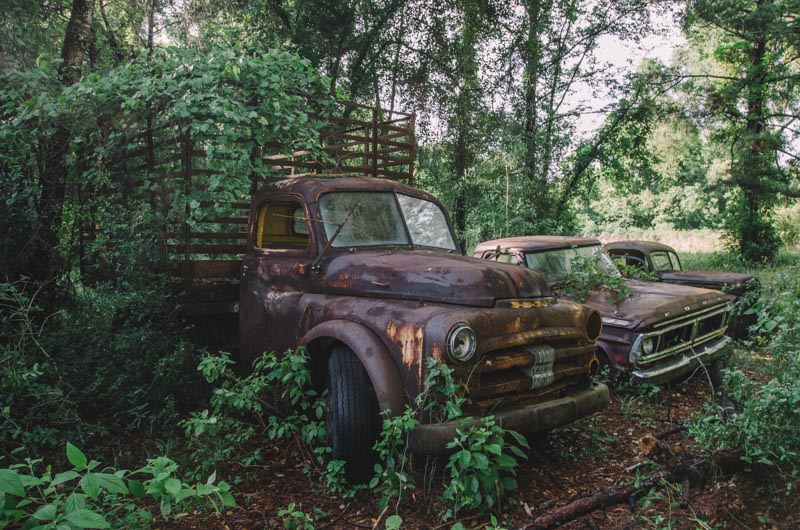 Just south of Crawfordville is a field containing rusted Ford cars and trucks overgrown with vines and grass, neatly lined up and in chronological order dating back to the early-1900s to the mid-1970s owned by Pat Harvey.

The trucks were once owned by Pat’s father on the Harvey family farm. Once the trucks served their working lives, they were used as parts in a bid to keep other farm equipment functioning. Pat lined them up by year just to see what they’d look like in the chronological order. Many of these cars hold significant memories for Pat Harvey, such as a 1941 Ford pickup which was the first car he remembers riding in. Others include the first car he drove in, the first car he used to take on dates, and the first family car which was a dark green station wagon.

Harvey has been amazed by the countless travelers over the years who have decided to stop there. The downside to making the cars available to the general public are vandals. Most of the emblems and chrome have been stripped from the cars and the radiators have been stolen, most likely sold for scrap metal. Even though it frustrates him, Harvey hasn’t removed the cars from the property.

There is also local ordinance against people from collecting junk cars on their property in public view. Fortunately, the Harvey family has been collecting these cars well before the ordinance was put in place, so they have been grandfathered in allowing them to continue displaying their cars without the city bothering them. In fact, the Wakulla County offers a guide on points of interest along the Big Bend Scenic Byway, a nationally designated scenic byway, which includes Pat Harvey’s car collection alongside other places such as the Saint Mark’s Lighthouse. The trucks are located south of Crawfordville on U.S. 319 and the Harvey family welcomes photographers and travelers to stop by.