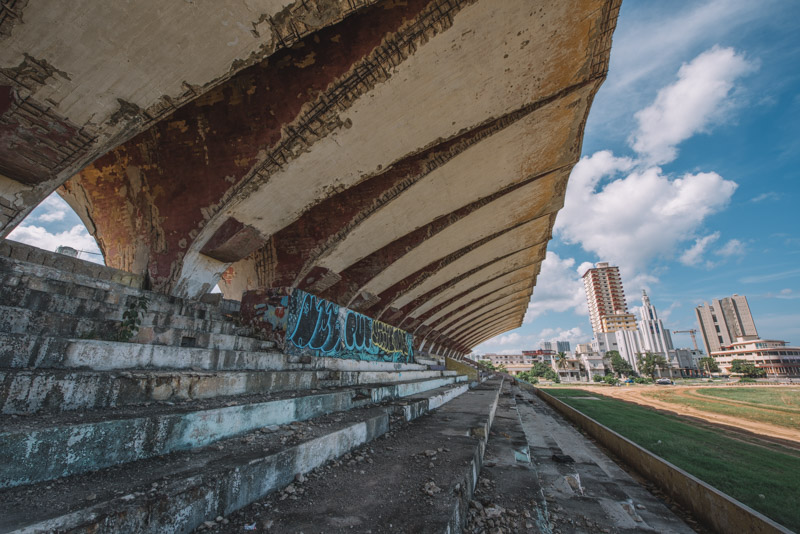 Parque José Martí in Havana, Cuba was originally designed in the 1940s under the Fulgencio Batista regime. Conceptualized as a sports complex for the younger generation of Cubans, the park was to reflect the optimism and hope of Cuba during the forties and fifties. Plans would not move forward until Fidel Castro took power in 1959. The park consists of a gymnasium, swimming pool, children’s area, and stadium.

The new socialist government selected architect Octavio Buigas to design what would be the focal piece of the park, the grandiose grandstand. Octavio Buigas was born on December 15, 1935, in Havana, Cuba and received his Bachelor in Architecture from the St. Thomas of Villanova Catholic University in Havana in 1959. Villanova University was founded by American Augustinians and when they were expelled from Cuba in 1961, the university was confiscated by the Cuban government and subsequently closed. The Augustinians fled to Miami, Florida where they founded St. Thomas University. Soon after designing the Parque José Martí stadium, Octavio Buigas fled to Miami as well where he worked for a real estate company. He worked his way up to becoming President of Ryerson & Haynes Realty in 1972, senior-vice President of Dorta-Duque & Associates, Architects, Inc. in 1972, and Chief Executive Officer at Southeast Enterprises Inc. in 1977. He was also on the Board of Directors of Barry University in 1981.

The Parque José Martí stadium’s unusual and strong form rises up from the landscape like concrete waves, reflecting the post-revolutionary architectural and political tides in Cuba. Its design is reminiscent of the Miami Marine Stadium in Miami which was designed by a Cuban architect as well. Cuba would go on to construct larger sports stadiums, such as the Estadio Panamericano which hosted the 1991 Pan American Games. Parque José Martí was mostly forgotten and neglected especially during the economic crisis following the dissolution of the Soviet Union. With its close proximity to the ocean, the salinity in the air penetrates the concrete and causes corrosion of the reinforced steel bars causing the structures to quickly deteriorated. Despite this, Cubans continue to train, exercise and play soccer in the crumbling sports complex.