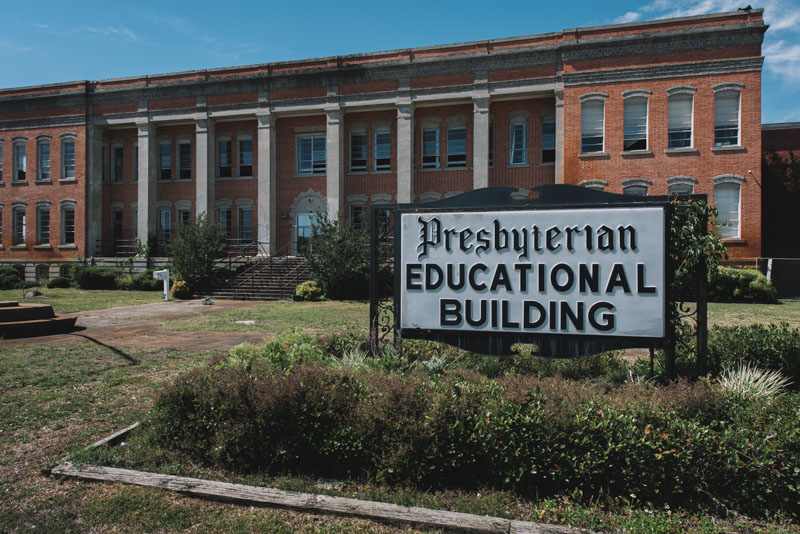 The Panama Grammar School was built in 1914 as Panama City High School and was Bay County’s first modern school building. It was designed by Pensacola architect S.J. Welch who designed a few other historic buildings such as the Bay County Courthouse. Coincidentally enough, the contractors that constructed the Panama City Grammar School, Montgomery-based Dobson & Oliver, also constructed the county courthouse around the same time. The last graduation held there was on July 4, 1926, due to the construction of the new Bay County High School.

The former Panama City High School would become a grammar school and be renamed Panama Grammar School, operating as such until its closure in 1965. After its closure as a public school, the First Presbyterian Church purchased the building and have since used it for a variety of reasons from ballet classes that took place upstairs to a commercial kitchen to hosting fellowship gathering n its meeting room.

On October 10, 2018, Hurricane Michael passed over Panama City, causing mass spread damage throughout including those owned by the First Presbyterian Church. With limited funds, the church chose to prioritize their efforts on rebuilding the church sanctuary and Sunday school and put the former school building up for sale in hopes that someone could restore the heavily damaged structure. Shortly after it was put on the market, the building was listed on Florida’s Trust for Historic Preservation’s annual “11 to Save” list in 2019, the same year that the James Ross Mellon House was put on the list. Because the building wasn’t recognized as a local landmark or on the National Register of Historic Places, there were no protections in place to prevent demolition or insensitive alterations. After months of work to get the building national recognition, The Panama Grammar School was added to the National Register of Historic Places on January 21, 2020.